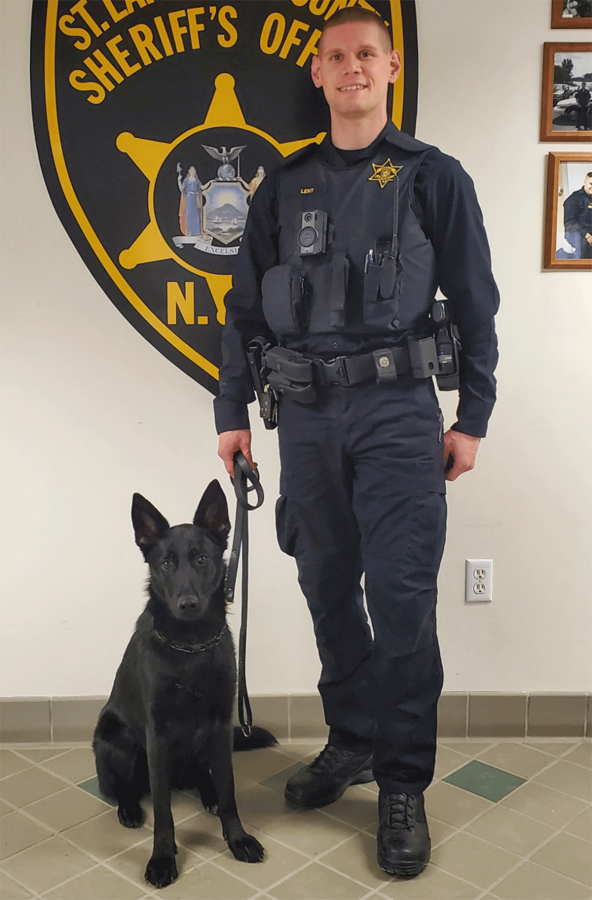 Deputy Lent and Knowlton completed their training at Phillip’s Command Dogs in Olean on Feb. 20.

Knowlton is certified in tracking and narcotics detection. Knowlton’s second day on the job showed she learned her training well when she assisted the Canton Police Department in discovering 28.4 grams of cocaine and 14 pounds of marijuana as well as $24,000 in cash, according to the Sheriff’s Office

“Sheriff Knowlton was a big proponent of the K-9 program that has, over the years, aided in finding lost children, tracking suspects, and discovering of illicit drugs,” the sheriff’s office said.

“We have to thank Homeland Security Investigations (HSI) Special Agent in Charge, Kevin Kelly and Resident Agent in Charge, Russ Linstead for working with the Sheriff’s Office and advocating for the K-9 program. For many years HSI has helped provide funding for training and the initial cost for the canines,” Sheriff Brooks Bigwarfe said.

Sheriff Bigwarfe has plans to ensure future K-9 dogs will be named in honor of former St. Lawrence County sheriffs, undersheriffs and deputies.

“The Sheriff and Sheriff’s Office are very proud of the K-9 program and will be advocating for a second K-9 unit in 2022. Initial funding for a K-9 is not a county-covered expense and funding from the public and other agencies is necessary,” the sheriff’s office said in a news release.

Anyone who wants to donate to the K-9 program can send donations to St. Lawrence County Sheriff’s Office, 49 1/2 Court Street, Canton, NY 13617 and note on the check it is for the K-9 program.