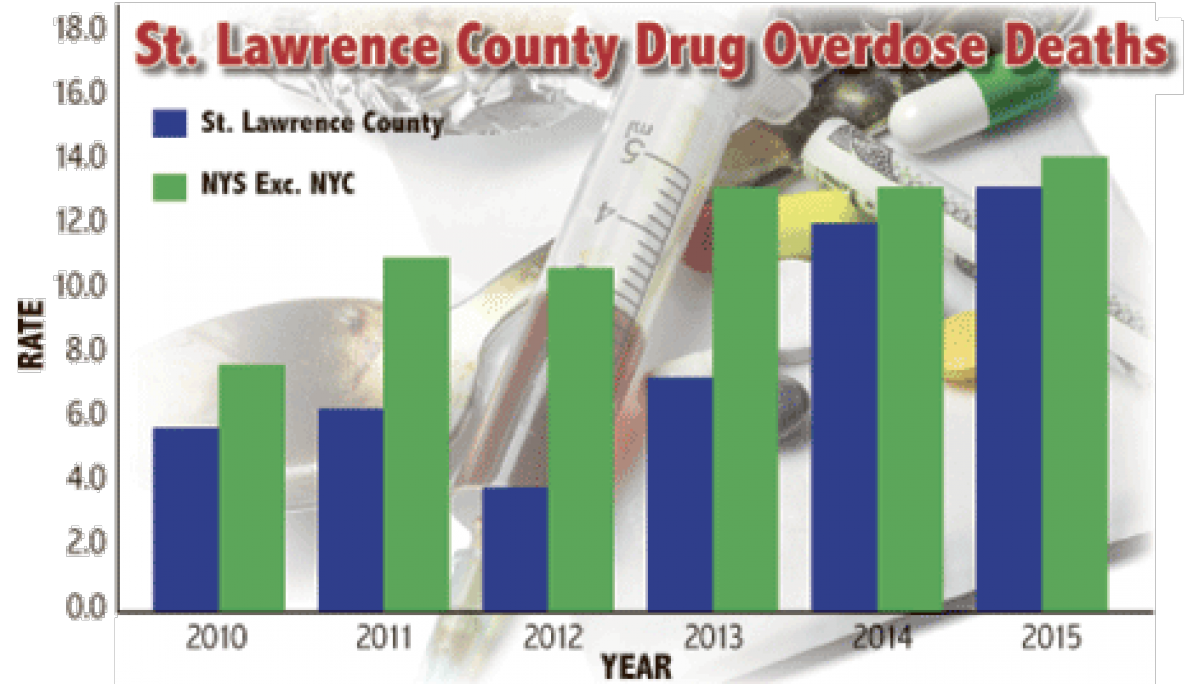 The first meeting is planned for today, Dec.14. While membership has not been firmly established, SLC Public Health Director Dana Olzenak McGuire said she is canvasing widely as she begins the effort. Confirmed participation for the initial meeting includes representation from law enforcement, emergency services, the US and district attorneys’ offices, the county jail, health organizations, health care providers and pharmacists, county coroners and others.

At least nine people died from opioid and heroin overdoses in St. Lawrence County in 2017, which was down from 14 deaths reported in 2016, according to a quarterly report from the state Department of Health, but police continue to make drug related arrests on a near-daily basis and distribution of Narcan, which counteracts the effects of an overdose, has become commonplace.

As part of the countywide assessment, she said she hopes to improve the surveillance of opioid and heroin use to obtain accurate figures related to deaths and incidents. Implementation of ODMAP, Overdose Detection Mapping Application Program, that identifies where arrests and overdoses are occurring in collaboration with law enforcement and emergency services, is one way to accomplish this. Additional information she hopes to obtain includes the number of opioid prescriptions being issued, and the number of emergency room visits and 911 calls related to the drugs. She also wants to compile an complete list of resources that those suffering from addiction can access.

She would like to see the assessment completed as early as June, but says it could take longer.

Once the data is collected Olzenak McGuire wants to make the information available online. The goal is to get a real idea of the severity of the problem and target education and treatment assistance to the places that are in most need of help.

Typically, this sort of data can be used to secure funding to expand resources.

Olzenak McGuire also wants to educate the public and cut through the stigma associated with addiction. She would like to see information provided at schools, public events and places of employment so people can become aware of the problems created by opioid and heroin and learn where to get help.

While heroin and opioid abuse have become a major health concern across the nation and state, St. Lawrence County is among the harder-hit places.

A report from the state department of health shows St. Lawrence County hit a record high number of inpatient opioid-related stays in 2013 when hospitals reported 962 inpatient stays for opioid-related incidents. That equates to nearly 860 people per hundred thousand, nearly double the 2010 rate of 457.

Although opioid-related inpatient hospital admissions declined to 828, or 734 per hundred thousand people, in 2014, the inpatient treatment still rose 62 percent over the four-year period.

St. Lawrence County’s four-year average was surpassed in New York only by Oswego, Lewis, Orleans and Tompkins County, all of which have significantly lower inpatient admissions overall.

In 2014, the only county with a higher rate of opioid related inpatient hospital stays was Bronx County, which had 859 per hundred thousand. And while the rate there was higher than in St. Lawrence County, hospitals in Bronx County actually saw a 4.2 percent decrease in the four-year average. In a county with a population estimated around 112,000, that’s pushing one percent of the total population in St. Lawrence County and is well above one percent of the adult population, meaning at least one inpatient stay occurs for every 100 adults in the county.

Earlier this year, the county filed a lawsuit against pharmaceutical companies and physicians over alleged aggressive and fraudulent marketing of prescription opioid painkillers.

St. Lawrence County Chairman Kevin Acres, R-Madrid said the basis of the suit is to recover cost to the county in dealing with the fallout of the opioid epidemic. He says the cost to taxpayers is significant as it impacts everything from law enforcement to foster care. He said opioid and heroin abuse is a “family destroyer.”

According to the lawsuit, at least 44 St. Lawrence County residents suffered opioid-related overdose fatalities between 2003 and 2014.

For more information about the Public Health Department’s work to combat the opioid epidemic, contact Dana Olzenak McGuire at 315-386-2325.