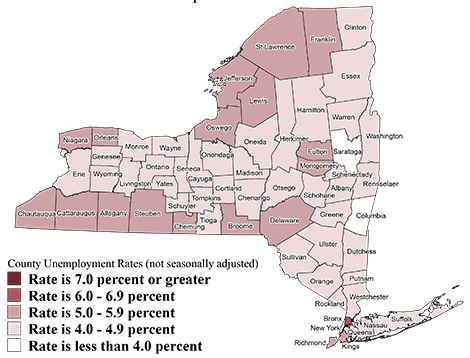 St. Lawrence County’s unemployment rate remains the third highest in the state, according to the department of labor.

The county dropped to 5.8 percent in September compared 5.9 percent the same time last year, according to a report form the department of labor.

The number of employed people has remained nearly flat at 40,700 and the number of those unemployed has changed by fewer than 100 people. In September of 2017 about 2,500 people were collecting unemployment, which is roughly the same as the previous year.

In Jefferson County, the unemployment rate dropped from 5.3 percent from 5.6 percent in 2016.

Franklin County saw a slight rise in the unemployment rate from 5.2 percent in September 2016 to 5.4 percent in the same month this year. However the number of people actually working in Franklin county rose by about 100 from 18,800 in 2016 to 18,900 in 2017. The number of people unemployed rose slightly from about to 1,000 to around 1,000, however because of rounding that different did not qualify as a net change in the report.