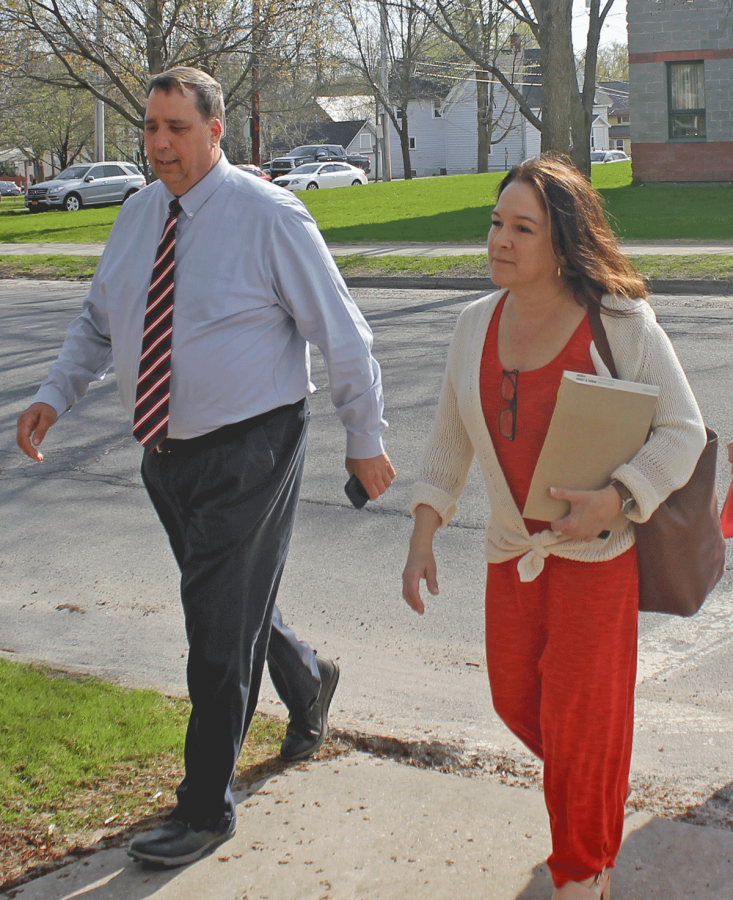 CANTON -- The St. Lawrence County legislature on Monday night voted down a resolution calling on an embattled member of the board to resign in the wake of an anti-Muslim Facebook post.

The board voted 10-5 against the motion calling for the resignation of Rita Curran, R-Massena.

The vote was mostly along party lines, with several Democrats voting no and one Republican voting yes.

Curran on April 25 shared an image from a page called Empire State Conservatives. It shows an airplane flying into the burning World Trade Center on Sept. 11, 2001. It is accompanied by the text “Every time a Muslim stand [sic] up in Congress and tells us they are going to change the Constitution, impeach our president, or vote for socialism, remember you swore you would never forget. They swore they would destroy us from within.” She deleted it the next day after the St. Lawrence County Democrats released a statement condemning the post and calling for her to resign.

The vote followed a public comment session that ran about two hours where nearly 40 residents shared mixed opinions on Curran’s controversial social media post. The meeting was moved upstairs to a larger courtroom to accommodate the big turnout. A protest that included about 50 demonstrators walked from St. Lawrence University to the meeting, holding signs that called for Curran’s resignation and unity among all people. Spectators had to go through a metal detector before entering, and St. Lawrence County sheriff deputies were on guard at the meeting. Sheriff Kevin Wells escorted Curran into the county building shortly after 5 p.m., just as a small number of her supporters gathered for a counter-demonstration.

Debate among the representatives was as divided as the vote that followed. Curran did not speak.

Haggard, D-Potsdam, introduced the resolution and went on to say Curran’s "created a crisis in governance."

He also said he spoke with the imam at Potsdam’s mosque and met with members of the local Muslim community, some of whom are doctors who work at area hospitals.

"They are not trying to destroy us from within. They are treating us every single day,” Haggard said. "We either condone racist speech or hate speech, or we condemn it. It's up to this board to determine which side we stand on.”

He also spoke out against threats that Curran and other legislators said they received since the controversy broke.

"What's also is unacceptable is threats sent to Ms. Curran in the form of pictures threatening violence. This is unacceptable. It is intolerable and should not be condoned period. She has a right under the First Amendment to say anything she pleases."

Legislator Tony Arquiett, D-Helena, said he would have supported a censure resolution instead but Curran has made no public apology.

"My willingness to move to censure is no more. I will not agree to a censure, because of the fact that Rita has not apologized to the many, many people she's traumatized ... I will be supporting her resolution,” he said.

Nance Arquiett, D-Winthrop, compared the sentiment Curran shared to school shootings, many of which are perpetrated by white shooters.

"It is not the Muslim community that is our enemy, instead radical individuals,” she said. "School shootings are primarily carried out by white males. Does this mean we should fear all white men? Or should we hold the guilty accountable.”

She also condemned the threats against Curran and other board members.

"I do not condone the sentiment behind the post, or the threats and intimidation,” she said.

Burke, R-Norfolk, who supported the call for Curran to quit, said hate speech has affected his family.

"I think if we were to ask for a censure ... it's a forgiveness that's not ours to give ... none of us on the board, to the best of my knowledge, are Muslim. I can tell you there's not many people sitting here who don't have relatives, who don't have friends, individuals in our lives who are very much affected by hate speech. I have grandchildren who are Hispanic. I hear tales of what it's like for them in school and how they've been victims of prejudice,” he said.

Terminelli, D-Massena, said she feels the larger issue is supporting the Muslim community’s freedom to practice religion without feeling discriminated against.

"The practitioners of the pillars of Islam and the Muslim faith has the right to freely practice their religion and not face discrimination because of it,” she said.

Regan, R-Ogdensburg, said he thinks the county Democrats engaged in “character assassination” by bringing forward the Curran resolution on Monday instead of at a meeting a week earlier where the issue was discussed.

"By bringing it up, they were able to generate more press coverage for tonight, and over the course of a week they were able to get the chairman of the college Democrats ... to hold a protest and urge us to ask Ms. Curran to resign,” he said. "If you can't beat her at the polls, besmirch her reputation.”

That drew jeers from the audience, which provoked a scolding from chairman Lightfoot, who threatened to have people making further interruptions escorted out.

Regan went on to say he supports the local Muslim community.

"We’re blessed to have members of the Muslim faith in St. Lawrence County,” Regan said. "We're lucky to have them."

Forsythe, R-Lisbon, said he doesn’t think what happens on social media is relevant to the business of county government.

"I'm not here for Facebook. I will oppose the resolution wholeheartedly. The same as I have in the past,” he said. "Spend less time on Facebook. Get outside. Enjoy the outside."

He also had words for members of the press, who he said don’t attend unless there’s controversy.

"We never seem to see you here when it's good news. When it's controversial, the place fills up,” he said.

Acres, R-Madrid, said he didn’t support the motion and reacted to comments from members of the public.

"What I do appreciate is we do have somebody who's paying attention,” he said. That was in reference to a St. Lawrence University student who said he thinks the Curran controversy distracts from global issues facing Muslims, such as their oppression at the hands of the Chinese government.

He also took issue with the words of Alex Hammond, Waddington’s town supervisor and a Democrat. Hammond said he believes elected officials give up their right to free speech once they take office.

Perkins, D-Potsdam, said he would support a censure but not a call for resignation.

"If we start shutting down freedom of speech, we are headed down a dismal road,” he said. "We will be held accountable by our constituents."

Sheridan, R-Hammond, said he sees Curran’s post as calling out two specific Muslim members of Congress - representatives Ilhan Omar and Rashida Tlaib, and he agrees with that.