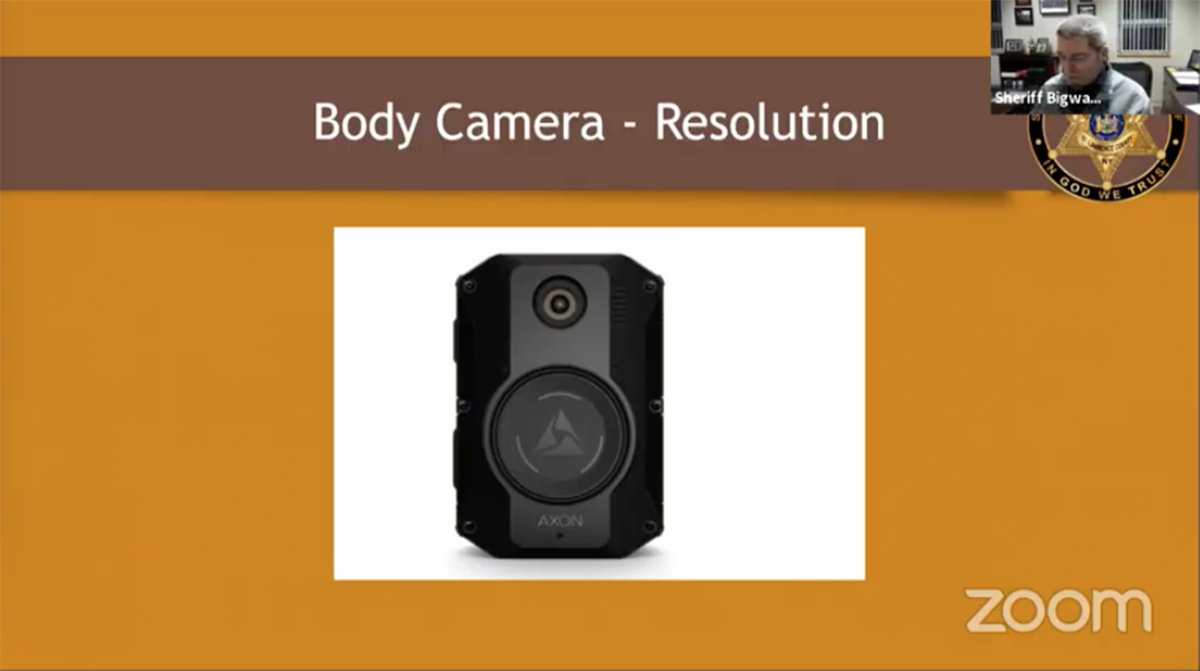 Above is the Axon-brand body cameras that St. Lawrence County sheriff deputies will likely be using in the near future. The big button in the center turns it on, and has to be held for three seconds to turn the device off. Screenshot from Zoom.

CANTON — A St. Lawrence County legislative committee gave preliminary approval for the Sheriff’s Office to spend $60,000 to equip all of their road patrol deputies with body cameras.

The Operations Committee unanimously voted in favor during their Monday, Jan. 11 meeting. It will have to go in front of the full board in early February before it’s official.

Sheriff Brooks Bigwarfe said the money will buy a five-year contract from the Axon Company for 34 cameras, one for each of the 32 deputies and two spares, plus licensing fees and cloud storage.

He said they have to buy the cloud storage because the recorded videos are subject to discovery at trial and can’t legally be kept on the county’s server.

He said deputies should have them recording whenever they’re on the job, and there will be sanctions for deputies who turn them off.

“They do know there’s policy they will follow regulations, and if they don’t there will be consequences,” he said. “They want to show people they’re doing the right things out there. This is a good thing for deputies.”

The sheriff said there will be a learning curve, but part of the deal will pay for Axon sending people to assist with getting them set up and showing deputies how to properly use them. At the end of each shift, an officer would remove their body camera and place it on a charging station. While it charges, the footage will upload to the cloud server, and any updates for the camera software will download and install.

“It’s powered up for the whole shift, then you record with the button in front of you,” the sheriff said. “We’ve been testing these with four of our officers on a pilot program, and they will last for 12 hours.”

The cameras are turned on with a large button that faces outward. It has to be held for three seconds to stop recording, which is designed so a bump or jostle won’t power down the device, the sheriff said. It also has indicators on the top that the person wearing it can see that it’s on and recording.

Bigwarfe, who has “been a proponent of body cams for many years now,” said the deputies are in favor of using them.

“There’s been a lot of positive feedback form our officers who are wearing these, that they really like them and they’re glad to have them,” he said.

He says the advantages for deputies include helping “confirm the nature of events and support accounts that are articulated” and also evidence gathering, and also as a resource for investigating use of force or civilian complaints.

“We come up with quicker resolutions,” he said. “They’ve done studies that show we have fewer lawsuits and litigation in those departments that have body cams than those that don’t.”

Legislator Jim Reagen, R-Ogdensburg, applauded Bigwarfe and Undersheriff Sean O’Brien for the months of research and work they put into finding a vendor and crafting a policy for the use of the body cams.

“I really believe your leadership on this issue is going to go a long way to helping people to realize your department and our law enforcement community is committed to fair treatment for everyone,” he said.