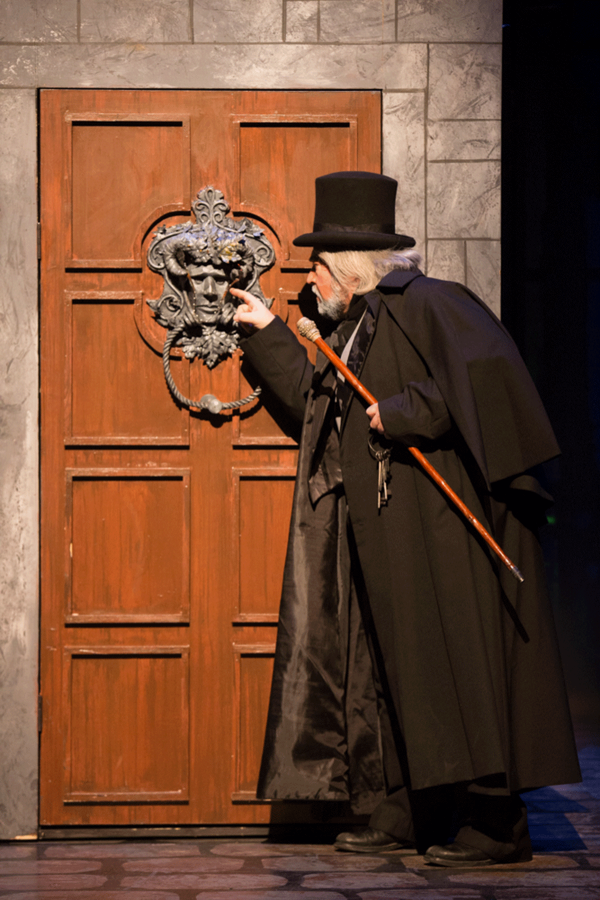 OGDENSBURG – Theater goers can expect a music-filled interpretation of the Charles Dickens classic “A Christmas Carol” when the professional production takes the stage at George Hall Auditorium Dec. 15 at 6:45 p.m., according to the actor who plays curmudgeon-turned-philanthropist Ebenezer Scrooge.

Actor and playwright Andy Meyers says he is grateful to reprise his role of Scrooge and thankful that he can again celebrate the holidays traveling the country and bringing live theater to remote regions like St. Lawrence County.

“One of the great things about being on a professional tour like this one is being able to go from place to place, from small town to big town and help celebrate this timeless classic Christmas story of redemption,” Mr. Meyers said in a recent phone interview.

Splitting his time between wearing hats as an actor, director, playwright, and arts administrator, he has worked at theatres across the county.

His previous touring credits include “Annie” and “Bus Stop,” and he starred Off-Broadway in the 35th Anniversary revival of “Dames at Sea.”

In addition to his current tour of “A Christmas Carol” - being promoted by CMI Entertainment Inc. and Ogdensburg Command Performances - Mr. Meyers also serves as Artistic Director for Fort Peck Summer Theatre in his home state of Montana.

“A lot of times people think professional actors all come from New York or other big cities, but there are many of us who hail from small towns and can personally connect with audience members in the smaller venues that we play,” he said. “I grew up in Montana and other cast members are from small towns. We know how important it is to tour, and perform in rural areas and small counties.”

The Dec. 15 performance of “A Christmas Carol” in Ogdensburg will give audiences not only a chance to enjoy the usual frightening moments, but a chance to enjoy a musical interpretation of the classic Dickens story, according to Mr. Meyers.

“One of the cool things is that there is music and singing throughout the show, but there is no orchestra pit, instead the actors, the ensemble, all play music from the stage,” Mr. Meyers said. “The songs are all traditional carols that have been rearranged.”

He said another reimagining that takes place subtly during the performance is the demeanor of his character Ebenezer Scrooge.

“This is a self-aware Scrooge, he is aware of the changes happening within,” he said. “He accepts the journey that Jacob Marley has sent him on.”

This new adaptation of Dickens’ ever popular classic is receiving rave reviews with the beloved music of traditional carols woven throughout this tale. The show also features lush costumes, stunning sets, haunting special effects, and a heavy dose of humor, promoters said.

The Dec. 15 Ogdensburg performance is directed by Clayton Phillips, whose credits include “Kiss of the Spider Woman.” He has won awards for directing “Cabaret” and “Chicago” and “Slow Dance with a Hot Pickup.”