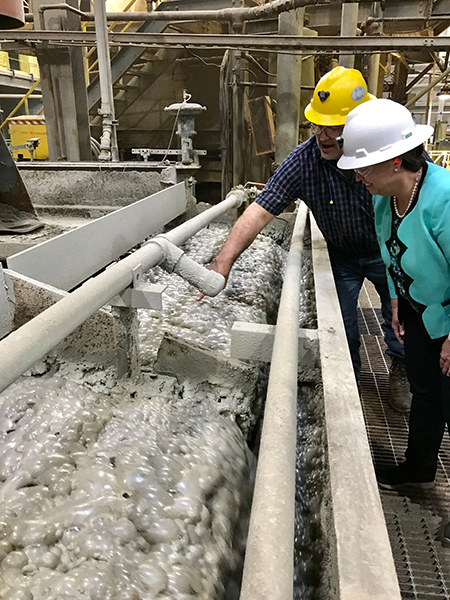 Senator Ritchie is with Ryan Schermerhorn, production manager at Empire State Mine, who showed the senator how the company processes raw ore into a zinc concentrate. Schermerhorn, a long-time employee of the mine, grew up in nearby Hammond.

On the visit, Senator Ritchie was able not only learn about new operations, but also speak with company officials about her support of a special training program that would give local residents the chance learn the skills needed to gain employment at the mine.

“Empire State Mine has already hired over 200 people who have been helped get this mine, which had been closed for eight years, back up and running and on the path to success,” Senator Ritchie said. “Knowing that the company is investing $33 million in the 2,700-acre mining operation, I was excited to learn that the training program is indeed helping St. Lawrence and Jefferson County people get back to work in the mine.”

“The Empire State Mine would like to thank New York State Senator Patty Ritchie and the St. Lawrence County Industrial Development Agency for working with the state to develop the training program to help local residents obtain the skills they need to be employed as underground miners,” said Keith Boyle, chief operating officer for Titan Mining Corp.

Last year, Senator Ritchie worked with the New York Power Authority to develop a partnership with the mine to implement this new training program to get those looking for work, certified as an underground miner.

About 70 percent of the mine’s workforce is now made up of North Country residents. Those jobs include mechanics, electricians, plumbers, truck drivers, computer technicians and more.

The company has also worked with Fort Drum to help place veterans leaving the military into positions at the mine and during her visit Senator Ritchie expressed interest in bolstering continued efforts to do so.

In addition, they are currently spending over $5 million on an underground and surface exploratory program to locate additional underground zinc deposits that will allow the company to expand its operations and extend the life of the 100-year-old mine. The company controls minerals rights to more than 80,000 acres in the Gouverneur-Edwards area.

The primary uses of zinc are for galvanizing steel, die-casting alloys and brass castings for automobiles, transportation, and industrial machinery in the construction industry.