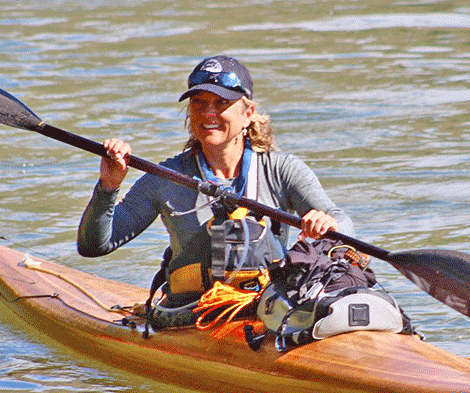 Eileen Visser on the Yukon River in the kayak she built and raced to victory.

POTSDAM -- It’s easy. First you build a kayak. Then you train for six days a week for more than half a year. Then you travel up to the Yukon, drop your boat in the water, paddle at nearly nine miles an hour for 51 hours, and just like that, you win.

Eileen Visser of Potsdam is back in town after finishing first June 30 among solo women kayakers in the Yukon River Challenge, a 444-mile race on the Yukon River from Whitehorse to Dawson City.

“Second fastest female solo time in 20 year history of race,” she said in an email to let us know how she did.

She is happy to spread the credit around.

“My kids Heidi and Scott flew up and were my pit crew. They did such a good job for me,” she said when we contacted her by phone.

“I didn’t get out of the boat for 23 hours,” she said, explaining the schedule, which included a mandatory seven-hour rest stop after the first leg. “You shower, eat, put more food in the boat,” and presumably get some rest, though she didn’t say so, “and then you start paddling again,” for another seven hours. Then there’s a mandatory three-hour break, then paddling to the end. Over two and a half days beginning June 27, she paddled for more than two whole days, resting for 10 hours.

“I trained for six days a week since November. When the water was frozen, I worked out on a torture device” similar to a rowing machine but adapted to simulate a kayak stroke.

Originally from Alaska, Visser, a Ph.D. marine biologist, moved to Potsdam in 1998, taking a position in St. Lawrence University’s biology department. She never let go of her love for the outdoors, raising her three children to take advantage of all the North Country had to offer. “I raised the kids canoe camping,” she said.

She had paddled canoes for decades before she and local builder Bob Ramsey took up the challenge of building kayak in 2015 at his West Potsdam shop.

“We each built a boat, and his is still in good shape – he hasn’t been beating his to death on the river like I have.”

Her Yukon adventure wasn’t all for fun and glory.

“What a privilege,” she said.

Inspired by a family member, Visser has a GoFundMe page, “Paddling for Mental Health,” with a goal of raising $9,200, half for her expenses and half for NAMI, the National Alliance on Mental Illness.

“…but just finishing the race – solo! – in her self-built boat! – with kids & parents as support crew! – will be pretty awesome!” she wrote on the GoFundMe page.

You can find that, and contribute, at https://www.gofundme.com/paddling-for-mental-health.