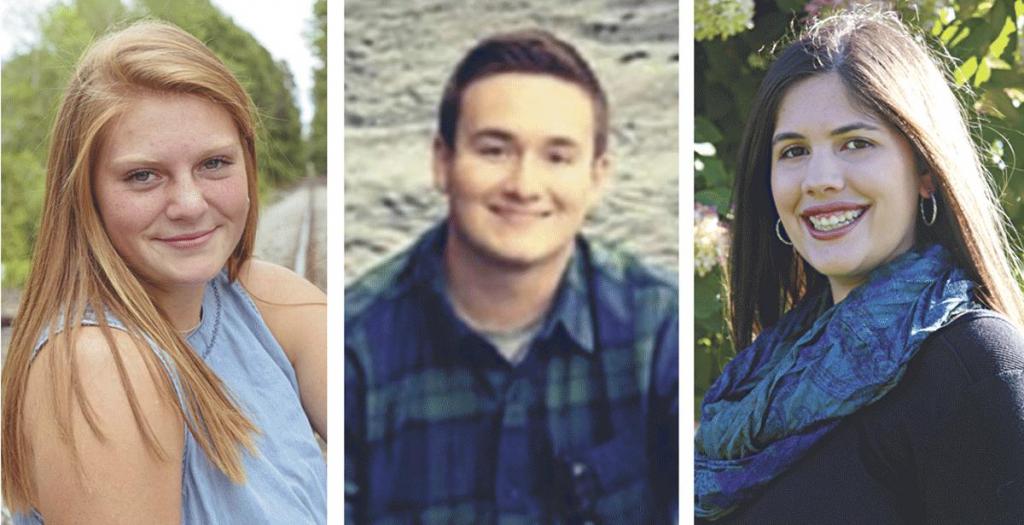 Three area graduating high school seniors who will be attending college in St. Lawrence County have received $500 scholarships from North Country This Week and NorthCountryNow.com.

They are Jacqueline Butler of Potsdam Central, Zachary Frank of Canton Central and Sydney Jarvis of Norwood-Norfolk.

Butler is the daughter of Gregary and Lori Butler. While in high school, she was a member of the Varsity Club for three years and the orchestra for five years. She played varsity volleyball for five years and varsity lacrosse for six years, and was on the indoor track team for two years.

She volunteered as a pre-K summer school aid, for youth lacrosse and volleyball, and helped make pillowcases for the pediatrics unit at the Canton-Potsdam Hospital. She is employed at Sergi’s Italian Restaurant & Pizzeria. She plans to attend SUNY Potsdam in the fall, majoring in Early Childhood Education and playing volleyball and lacrosse.

Frank is the son of Thomas and Lori Frank. He was a member of the boy’s varsity hockey team serving as captain, as well as varsity golf. He volunteers as a referee for ice hockey for the Wounded Warriors, fundraising for clubs and sports, and was a member of the yearbook committee.

Frank works as referee for USA Hockey and as a lifeguard for the Village of Canton. He was vice-president of his class and a volunteer firefighter/EMT trainee at the Canton Fire Department. He will be attending SUNY Canton this fall majoring in Criminal Justice

Jarvis is the daughter of Aaron and Karen Jarvis of Norfolk and valedictorian of the Norwood-Norfolk Class of 2020 with an average of 96.83. She graduated with an Advanced Regents Diploma with Honors, having taken honors classes including AP U.S. History, AP Calculus, AP Biology and college credit Public Speaking, Precalculus, English Composition and Statistics.

Jarvis was involved in a variety of activities including Key Club, Spanish Club, Drama Club, Musical, Band and Chorus. She is the current President of Key Club. She is involved in many volunteer activities through Key Club spending many hours after school to serve the club and community. Jarvis plans to attend Clarkson University to major in Biology.