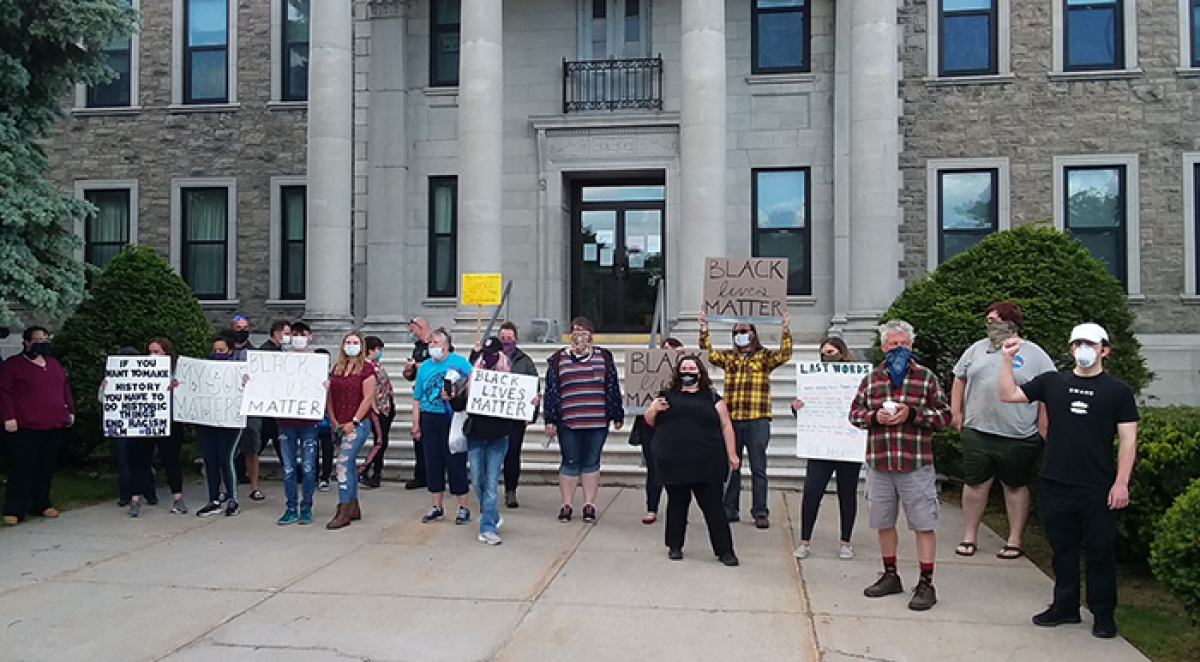 OGDENSBURG -- Although the alleged organizer, Paul Lawrence, was a no show, a Black Lives Matter march was held peacefully in the city with Ogdensburg police officers offering support.

A similar protest was held in Massena.

Around 20 people gathered on State Street Monday at 6 p.m. with fire trucks and police officers present and as the small group gathered looking for the organizer, Ogdensburg Police Lt. Robert Wescott took the opportunity to address the crowd.

Wescott said that he knew some of the people in the crowd and other faces seemed new.

“For those of you who aren’t from here, welcome to Ogdensburg,” he said.

Wescott also took the opportunity to support the protestors and share the police department's perspective on the death of George Floyd, which has triggered rallies, protests and marches across the nation.

The 46-year-old black man died last week after former Minneapolis police officer Derek Chauvin, who is white and was a cop at the time, was filmed using his knee to pin Floyd to the ground for nearly nine minutes.

“I just want you to know on behalf of the individuals who serve this city, we too observed the video of Mr. Floyd’s death and I don’t know any police officer that witnessed that, that wasn’t appalled and disheartened by what they saw," he said.

Wescott then asked the protestors if they were comfortable with officers joining them in their march.

Marches welcomed the officers with open arms and exchanged conversations.

As the march went on the numbers swelled to well over 50 people.

Carrying Black Lives Matter signs and chanting “I can’t breathe” the rally paused at city hall where the march paused briefly as they group gathered.

While largely peaceful, a few people exchanged words with marchers.

As the march moved a long Patterson Street a man used a public announcement system in his truck to denounce marchers.

“Democrats suck! Babies have a right to live too,” he said.

Another man also heckled the marchers calling them scumbags and using obscenities to describe the marchers. On two occasions he hollered at the crowd, but protestors continued on with their chants and the man quickly dispersed as the officers drew closer to him.

Those marching said they came out to raise awareness and show support for racial injustice and to condemn police violence. While the march was devoid of speeches, conversations were had and respect was shown for all those involved.

The march included people from children to seniors, as well as mixed racial makeups.

Although North Country This Week was unable to verify the identity of Paul Lawrence, the organizer did send a letter to the newspaper following the event.

“First of all, I would like to apologize for not responding to your attempts to contact me. I am very busy trying to organize these peaceful marches in small communities like your own and I lost track of responding. Let me start out by first saying I am not a current resident of Ogdensburg, but your community does hold a special place in my heart. I also want to apologize to anybody and everybody who may have been alarmed and scared by somebody from outside of the community organizing this peaceful march.

“My intention was never to cause fear or organize a march that would result in any sort of physical violence or destruction of any kind. My only intention was to prove to people outside of Ogdensburg that your community is a strong and unified community, and that the police force in your community is filled with good people who care about the community they serve and protect. Small communities like Ogdensburg get a bad reputation sometimes, and your North Country region in general gets a bad reputation as well.

“People sometimes think that the north country does not care about issues going on in the world, and that you are content to just sit back in your bubble and not speak up. I was so happy and relieved to see that your community members and your local police officers proved me right in believing that Ogdensburg was a community that could handle a peaceful protest march.

“I truly believe in communities like yours, and all I ever wanted to do was try to show those outside the community how Ogdensburg could come together and peacefully support a cause as one.

“Your police officers deserve so much credit for walking with those who peacefully marched, and it shows that Ogdensburg has the potential to be a positive, unified place to live when it wants to be. I apologize if I caused any fear, and my only ever intention was to organize a peaceful and unifying march from afar to show people that your community cares about world issues and still has plenty of good people left in it.

“Thank you to all who peacefully attended, and thank you to the Ogdensburg Police Department for marching with, and keeping their people safe.”