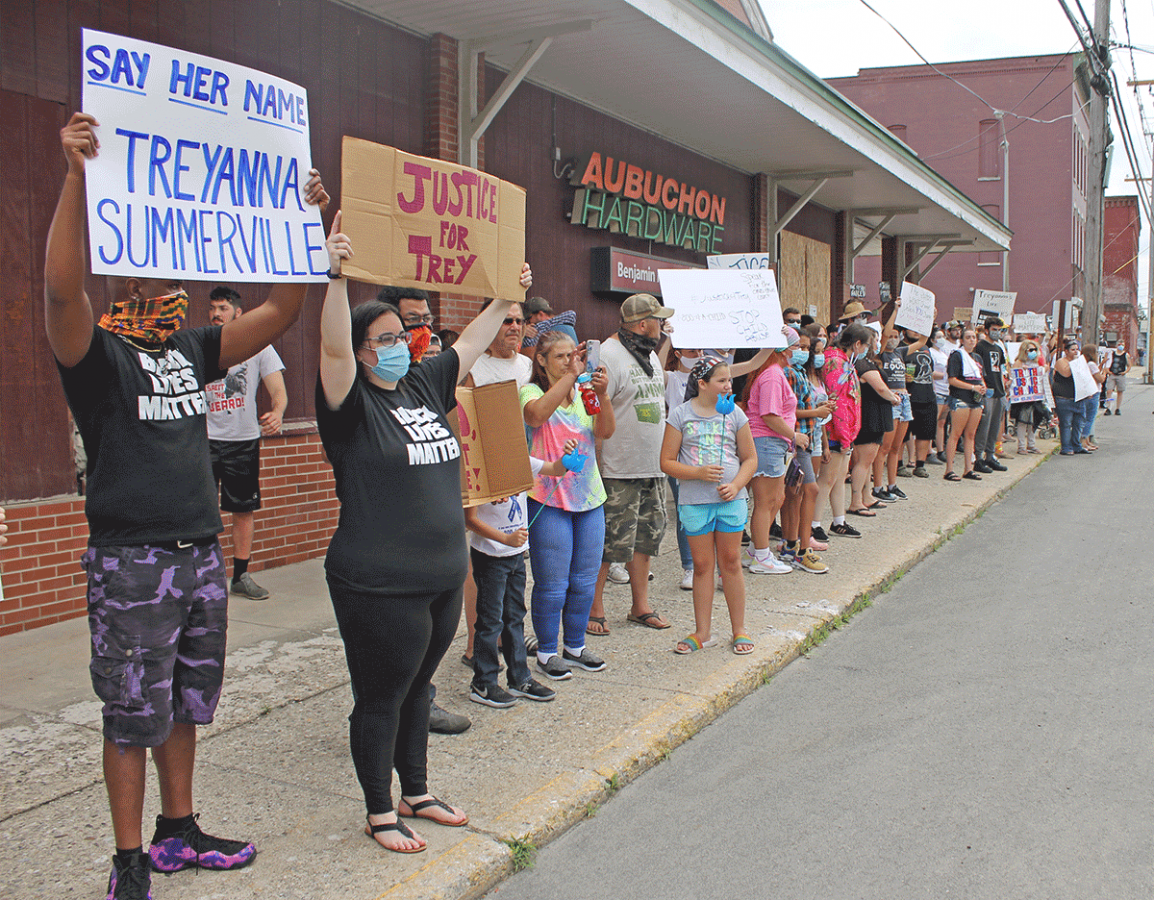 Demonstrators pause in front of the Gouverneur Police station, standing in silence and holding up their signs. NCNow photo.

GOUVERNEUR -- Over 150 people held a silent march and rallied in downtown Gouverneur on Saturday afternoon to mourn a young girl who was murdered earlier this week, and spoke out against the system they say didn’t do enough to prevent her death.

Black Lives Matter activists from Potsdam organized the event. It was in response to the death of Treyanna Summerville. The 18-year-old was murdered in the village just days earlier.

A 13-year-old has been charged in connection with the case. Summerville’s stepbrother attended the demonstration and said the person who has been arrested is the victim’s younger sister, who is now incarcerated while the case moves through the court system. They believe that the victim’s sister is innocent and the real killer remains free.

“My baby sister did not kill her,” said Tae’von Isiah Charlton Samuels, the victim’s stepbrother. 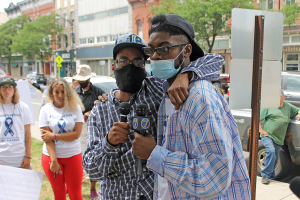 The marchers opted for their protest to be silent. There was no chanting, which often happens during a Black Lives Matter rally. Most of those in attendance didn’t even speak as they marched through the village.

Jennifer Baxtron, one of the organizers, said their main purpose was to mourn a young girl’s preventable death.

“This is a very somber moment, and we need to … think about this young lady who is no longer with us,” Baxtron said. “We are here to show respect for Trey and her memory.”

She said they chose Dashnaw’s Laundromat as their starting point, because Treyanna had been seen in the building with injuries that should have raised red flags.

“The cops were called and found her here sleeping and bloodied. They said she has mental health issues … and did nothing to help her,” Baxtron said.

Cedric Summerville, Treyanna’s father, initially didn’t want to speak but said he was encouraged by the show of support from the local community.

“I can’t rest until this monster is behind bars,” he said, referring to the person he believes killed his daughter. “You guys give me the strength to go on.”

Emily Burgess, one of Treyanna’s classmates, spoke at the gathering in the park and said there is a lot of guilt among the victim’s surviving friends.

“[The abuse] was obvious. We went to authority figures. I don’t know what else we could have done,” Burgess said. “It makes us feel guilty.”

There was some activity from hecklers as the group gathered in the park to honor Treyanna’s memory after marching through the village for about a half hour.

At one point during Samuels’ address in the park, a white man with an assault rifle on his back rode by on Main Street on a motorcycle, revving the engine and turning 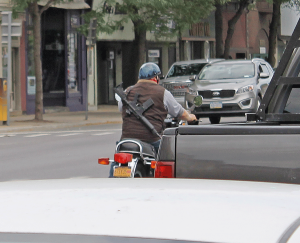 A man with an assault rifle on his back rides past the marchers revving his engine while Treyanna Summerville's stepbrother shared memories of her. NCNow photo.right on Grove Street to pass the park on its east side. Another group of motorcyclists appeared to be briefly circling the park at one point. And a couple of trucks occupied by what appeared to be young white men revved their engines as they passed while yelling out unintelligible comments.

Many passers-by honked their horns and waved in support.

When the group paused in front of the police station, a solitary man stood across the street wearing a shirt that said “Hello? Don’t all lives matter WTF?” and holding a sign that said “Sick of your ignorance.” He remained silent and did not engage the protesters, and the silent protesters did not engage him.

Prior to the march and during the gathering in the park afterward, Samuels talked at length and said the home he and his sisters grew up in was abusive, and the system failed the family. During a brief pause during the march in front of the Gouverneur Police station, he held up a sign that said, “They did nothing” with an arrow pointing at the building.

When the group gathered prior to the march’s beginning, Samuels addressed the crowd while holding a sign that said “Black life lost because CPS, white family ruined because CPS. Child abuse is a USA problem. #USALivesMatter.”

He wasn’t the only one to criticize social workers. During the park rally, a child took the microphone and said she doesn’t think CPS pays attention to signs of physical abuse in a home.

“CPS checks to see if you have food, but they don’t check to see if anybody is being hurt,” the youth said.

Samuels said his sister was frequently seen in local businesses like Price Chopper or Dunkin Donuts, and said she was probably happy when she was in those places because she knew she wouldn’t be hurt there.

“Price Chopper was a safe space for Trey,” he said. “There’s so much more to the story that needs to be uncovered.”

Gouverneur Mayor Ron McDougall came to the gathering in the park. Treyanna was his neighbor, and he said he supported the activists’ call for justice.

“Peace and justice for everyone, and let’s not rest until we get it,” the mayor said.

After the rally, organizers served cheesecake in the park in Treyanna’s memory. Her stepbrother said cheese was by far her favorite food, and she really liked cheesecake.

“I think she just liked it because it had cheese in the name,” Samuels said, chuckling.

The organizers are planning a second rally in front of the St. Lawrence County Department of Social Services on Wednesday, July 1 at 11:30 a.m. Organizers of the Saturday demonstration in Gouverneur said they wanted that day’s event to be about mourning, and the July 1 rally to be a call for action. 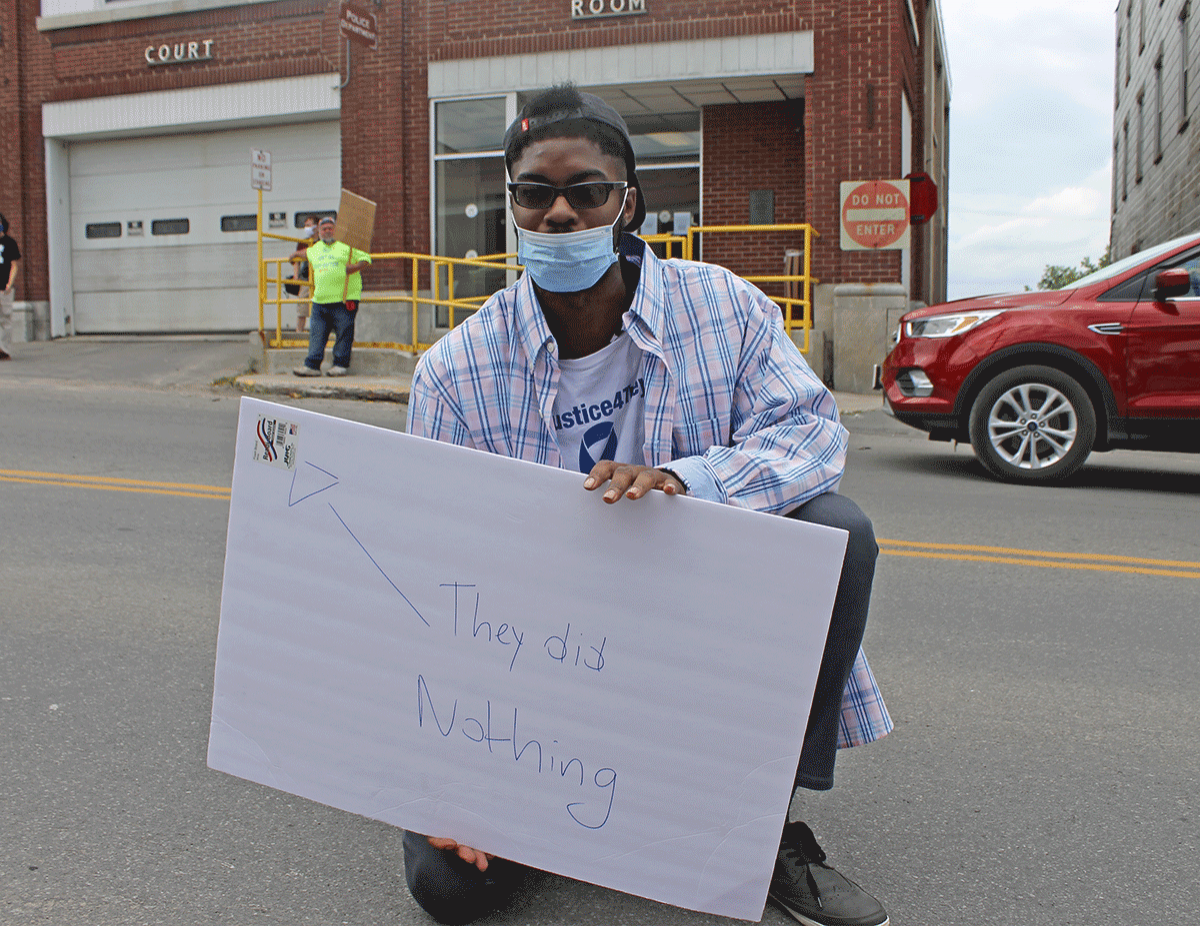 Tae'von Isiah Charlton Samuels, the victim's stepbrother, holds a sign that says "They did nothing" in front of the Gouverneur police station. NCNow photo. 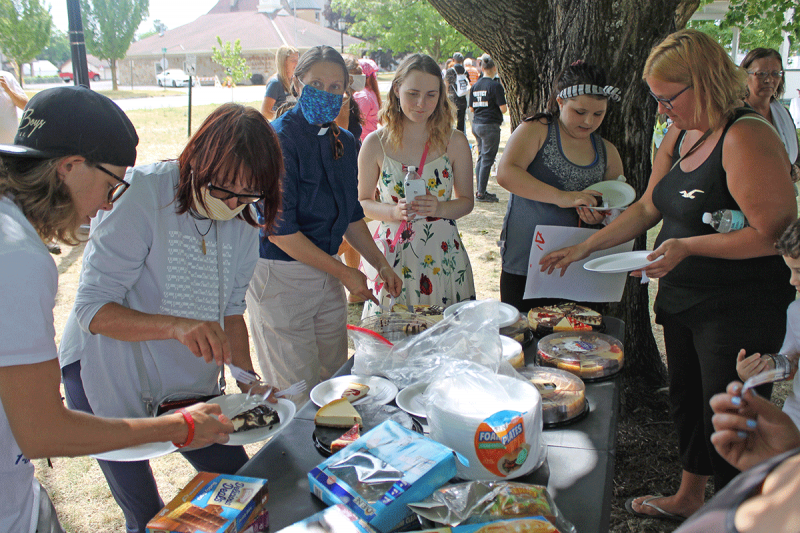 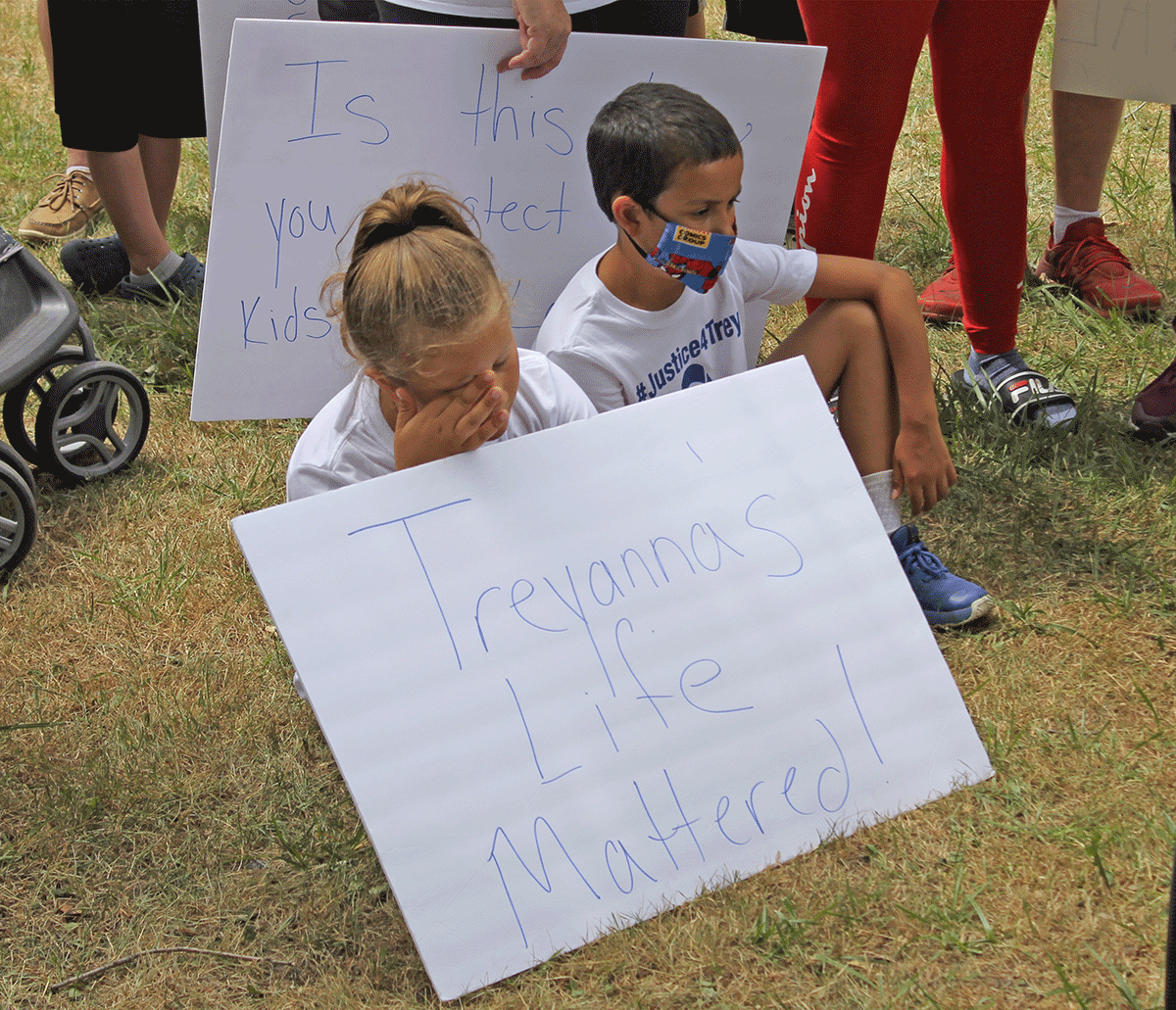 Youth participants in the march and rally sit with a sign that says "Treyanna's Life Mattered!!" NCNow photo. 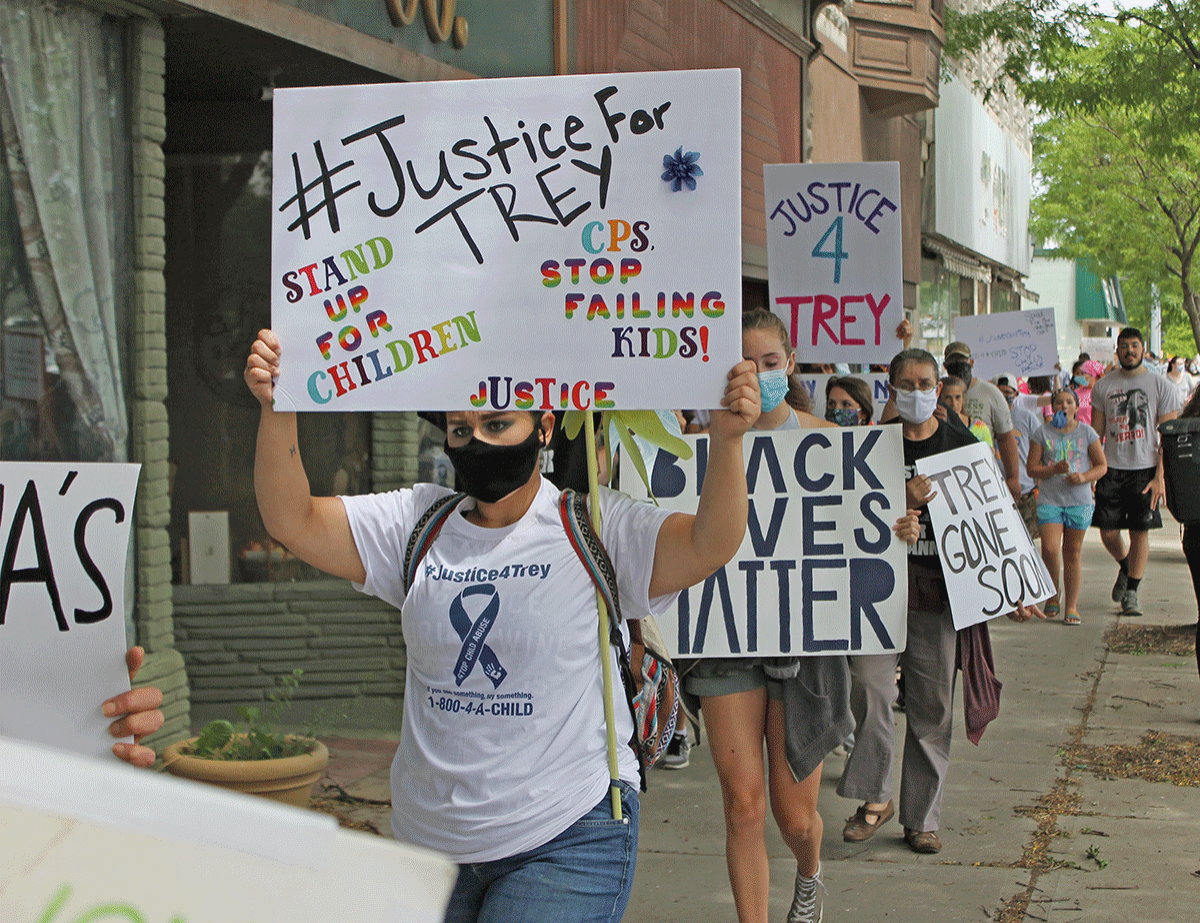