Over 100 gun control activists rally and march in downtown Potsdam 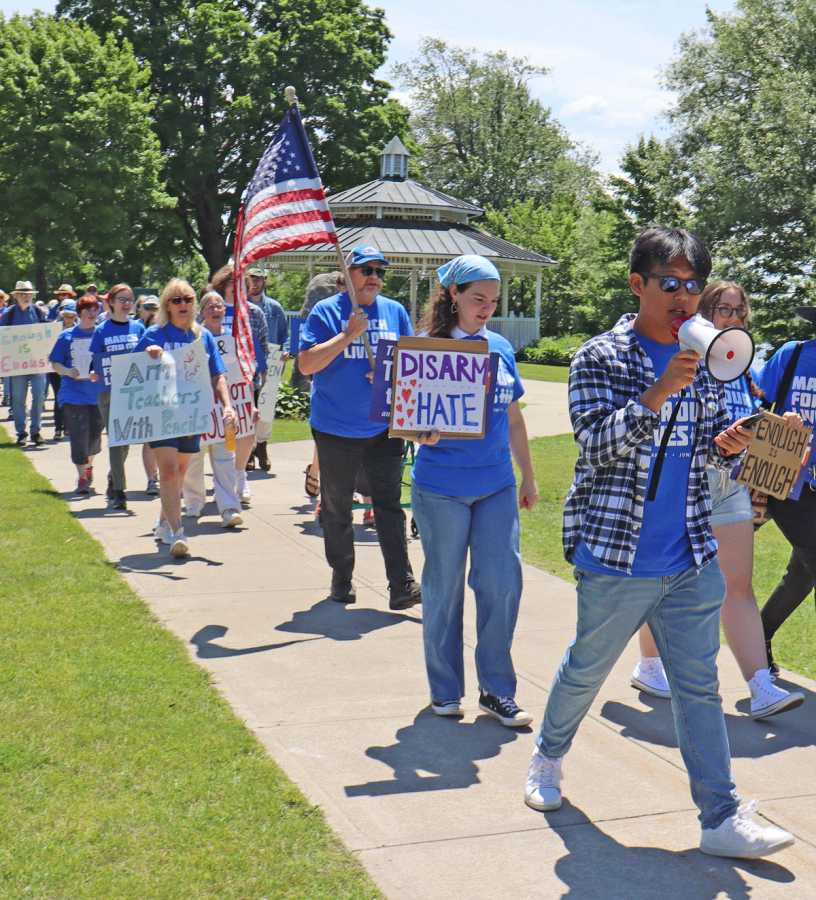 Over 100 local activists participate in “March for our Lives” Saturday in Potsdam, part of the nationally event held June 11 to rally against gun violence. NCNow photo

The “March for Our Lives” event started with several speakers at Ives Park Gazebo. Then, the crowd paraded to Potsdam High School.

“In this crowd, some of us are law-abiding gun owners, and some of us have never held a gun in our lives. Some of us are hunters, and some of us buy meat packaged in plastic at our local grocery store. But we have one thing in common. We demand that legislators do everything in their power to pass reasonable laws to protect this country’s citizens against gun violence,” said Laura Lavine, an event organizer. “Thoughts and prayers are not enough.”

“My children, who are 8 and 11, have never known a life where they didn’t practice active shooter drills,” said Sara Fregoe, a kindergarten teacher at Trinity Catholic School, Massena.

“I know as a teacher just how many children fit into my closet. I know I can pick up my table and prop it by my door in under a minute, and I know I will put my body against that table, against that door and quite literally it will be over my dead body before those babies are reached,” added Fregoe in her impassioned speech.

“I know for an absolute fact that I cannot be quiet any more. I know I can no longer do nothing. I know these things, and so do you. We are here to make some noise today, to grieve and to make clear we are no longer quiet either. We need change. My children need change. My students need change. We all need these gun policies to change so desperately, and we feel as though no one is listening. We need to be louder. We need to be firmer,” she said.

"In 2022 there have been 18, 725 shooting deaths caused by gun violence in the United States," Canton High School student speakers Peyton E. Taylor and Emma M. Gainey said. “We must act as catalysts for change, and we must do so now,” they chimed together, to the applause from the crowd.

"When a ripple of hate goes unchecked, it grows into a huge wave,” said Raamitha Pillay, North Country organizer for Poor People’s Campaign. “Hate is a ticking bomb.”

Following the speeches, the crowd marched through downtown Potsdam, chanting “No more silence. End gun violence”, “Act now. Enough is enough”, and “Fear has no place in school.”

Matt Castelli, a Democratic challenger to Elise Stefanik for the 21st Congressional District, talked with local activists at Potsdam’s rally and march, including with several students.

The marchers stopped at the Potsdam Post Office to read the names and ring a bell for each of the ten victims in the Buffalo supermarket shooting on May 14.

Another stop was made at Potsdam High School to remember the 19 students and two teachers killed at Robb Elementary School in Uvalde, Texas ten days after the Buffalo shootings.

Speaker Raamitha Pillay asked marchers to raise their hand if they were affected by the Texas elementary school shooting, as students, parents, or community members.

“The system is broken. It isn’t working for us. This is not a free country if we have to live in fear,” said Pillay. 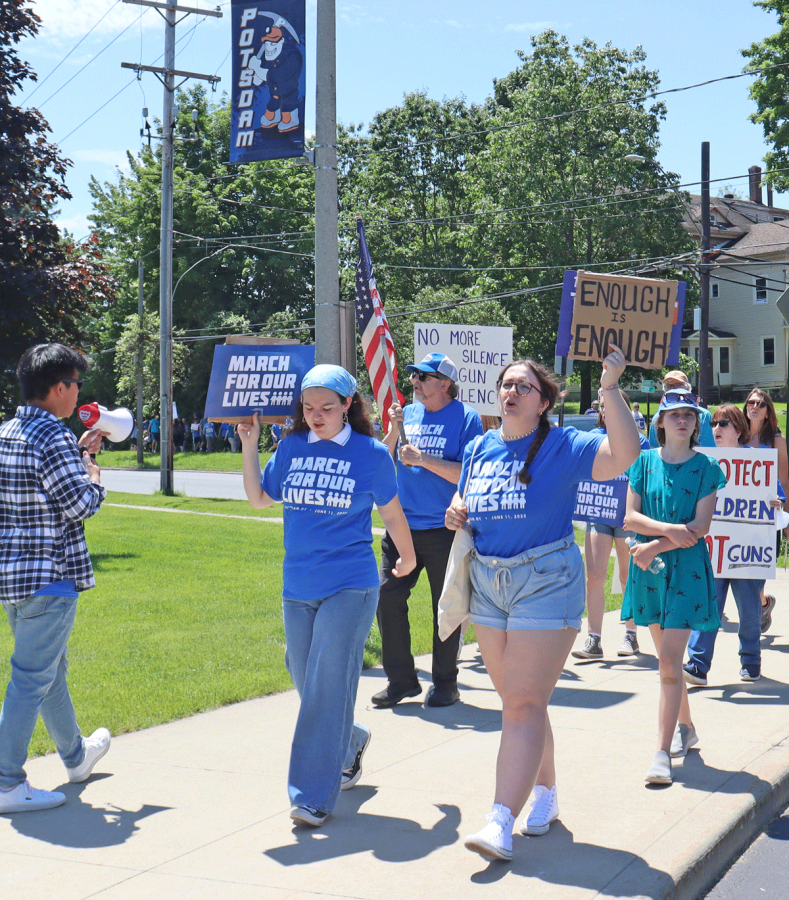 Over 100 local activists participate in “March for our Lives” in Potsdam to rally against gun violence June 11. Jay Baycura, a Potsdam High School senior, leads the march, with stops at the Potsdam Post Office and Potsdam High School. 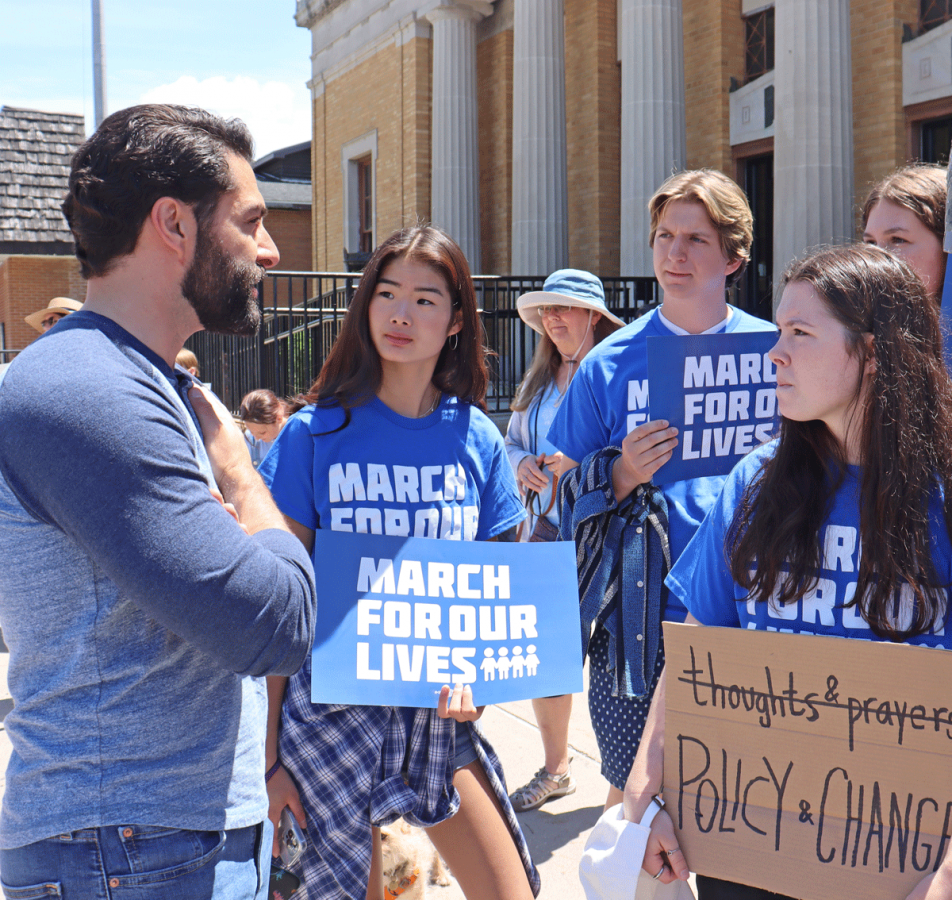 Matt Castelli, a Democratic challenger to Elise Stefanik for the 21st Congressional District, talks with local activists at Potsdam’s ‘March for our Lives’.