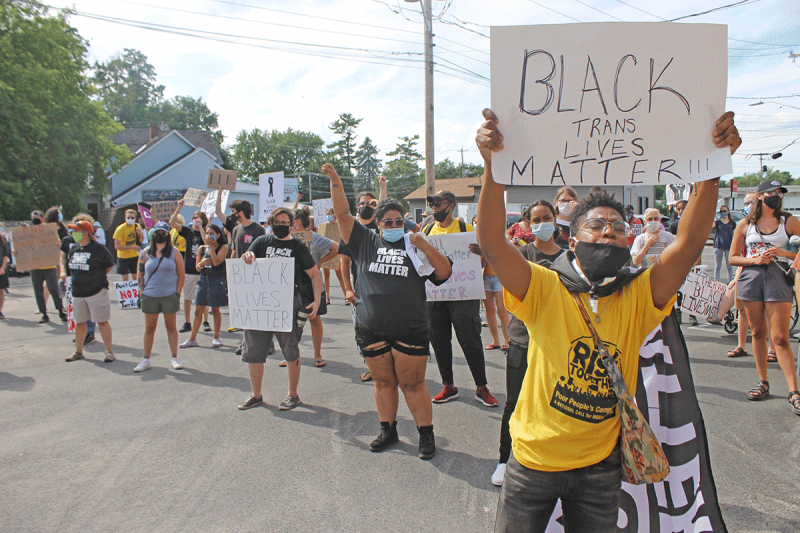 MASSENA -- More than 110 people marched through downtown Massena on Saturday to support a Black family who had a noose left in their yard, and to also demand larger systemic change.

The group gathered at Emmanuel Congregational Church on West Orvis Street and headed down Main Street around 2:30 p.m. The column of marchers stretched from the Post Office to Sunoco. They turned onto Bridges Avenue, went down Highland Avenue, turned onto Nightengale Avenue and paused at Massena High School. From there, they went up Sherwood Drive over to Andrews Street, and back down Main Street. Then they briefly rallied in front of the Massena Police Department and then headed back to the church where the march concluded.

During the rally’s climax in front of the police station, Jenn Baxtron, a member of the Potsdam BLM steering committee, said the group doesn’t feel village police took seriously the initial report of the noose.

In an online petition that circulated prior to the march, its author claimed the first responding officer brushed off the racial component and said the noose could have been a dog leash.

“We are here because they did not take it seriously when it first happened,” Baxtron, said in front of the station.

The demonstrators also chanted, “Stop covering up for these racist people.”

Shortly afterward, Massena police put out a statement saying they are treating the matter seriously and their Criminal Investigations Unit is investigating. Village police ask anyone with information on the case to call them at 315-769-3577.

“Let it be known that the Massena Police Department takes these matters extremely serious and anyone found to be involved in this will be charged to the fullest extent of the law. This will not be tolerated in our community,” the statement said.

At the march’s conclusion, Dr. John Youngblood, a Potsdam Black Lives Matter activist, told the family that the group will always back them up.

“You have a community of people behind you. Your lives matter. Your dignity matters,” Youngblood said. “Whenever you call us, we will be here because your lives matter.”

To the marchers, he said, “You have sent an important message. That message is, and will continue to be, black lives matter.”

Members of the family who were targeted with the noose were among the marchers. North Country Now is not identifying them due to their concerns for their own safety.

Just before the march began, one of the family members talked about what they’ve dealt with in town and said they feel hated in Massena.

“Because it’s a white town, we get called drug dealers, thugs, the n-word,” she said. “I hope this … brings light into the town that hates us.”

Baxtron said the marchers were there to bring awareness to Massena about racism in the community and to educate people on the effect it has.

“We just hope to accomplish some change, bring awareness to the community, educate and let people know this is real, and how it affects this family and people of color,” she said.

When Potsdam BLM rallied in Gouverneur in remembrance of Treyanna Summerville, a Black teenager who was murdered in June, they opted for a silent march out of respect for the dead.

In Massena, Baxtron called for the marchers to “use your voices.” They chanted as they headed through town, drawing honks from supporters and residents coming out on their lawns to observe the demonstration.

Bronchetti said he wasn’t there to represent the school board or the district, but was there “for myself.” He said he felt the need to support the civil rights activists after seeing the video where George Floyd was killed by a police officer who knelt on Floyd’s neck.

While paused near the high school, Baxtron called for educators to do more to teach about the history of systemic racism in the United States, which she feels is whitewashed.

Bronchetti said the board members are “not perfect” but they’re trying to do what they can to promote racial awareness in education. He pointed to the board’s efforts to work with the St. Regis Mohawk Tribe to teach more about Massena’s Indigenous neighbors, their way of life and their historical struggles. He believes that the education system’s role should be to “rectify and try to correct” racist mentality.

Hammond said he showed up to show support for the family who was targeted with the noose.

“I’m here to support the family that received the horrific noose on their doorstep,” he said. “This stuff really hits home.”

Hecklers were few. A small number of people who drove by revved their vehicles’ engines as they passed the protesters.

At the start of the demonstration, group of four men and one woman on motorcycles sat across from the corner of West Orvis and Main streets. BLM marchers identified the group as “counter-protesters.”

When interviewed by North Country Now, they didn’t identify as counter-protesters. They would not give their names when asked, and one of them wanted to know the names of the people marching.

When asked if they support the marchers, the man replied “not a f---ing bit.” He later asked the reporter, “Are you fake news, like the rest of them?”

A second man said the group was there to “check it out” and see if the protesters are “more responsible than things going on in cities.”

When asked what he meant by “things going on in cities,” the second man said looting and burning of buildings.

The Potsdam group remained peaceful throughout their march, remaining either on public sidewalks, or on the left side of the road on streets with no sidewalks. They have held numerous rallies in St. Lawrence County, big and small, since the death of George Floyd, all of which remained peaceful and civil.

Every BLM marcher observed by North Country Now wore a face covering to mitigate the potential spread of COVID-19. The group of five on motorcycles opted not to wear them, but they stayed across the street from the march and had left when the rally returned to West Orvis and Main. They did not interact with the group and looked on from an empty lot on the corner as the rally passed them by. 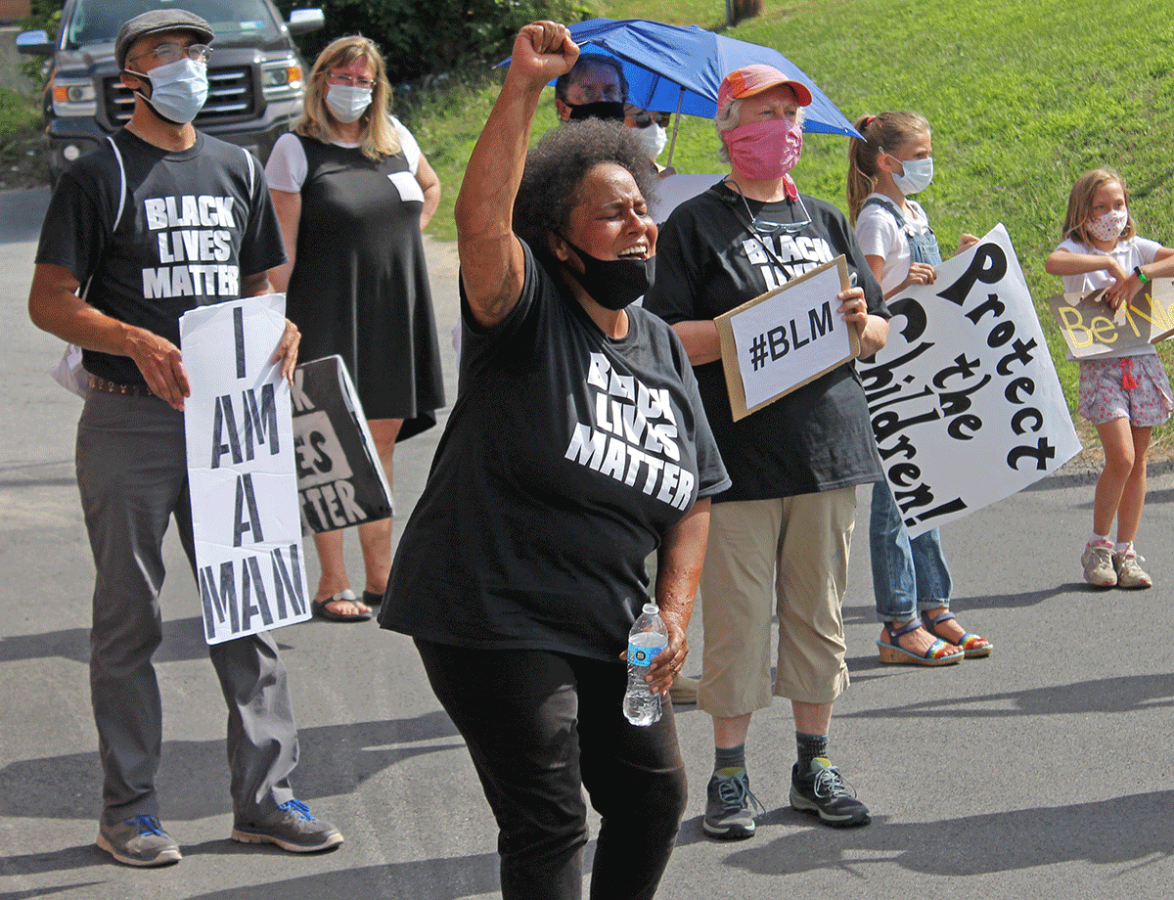 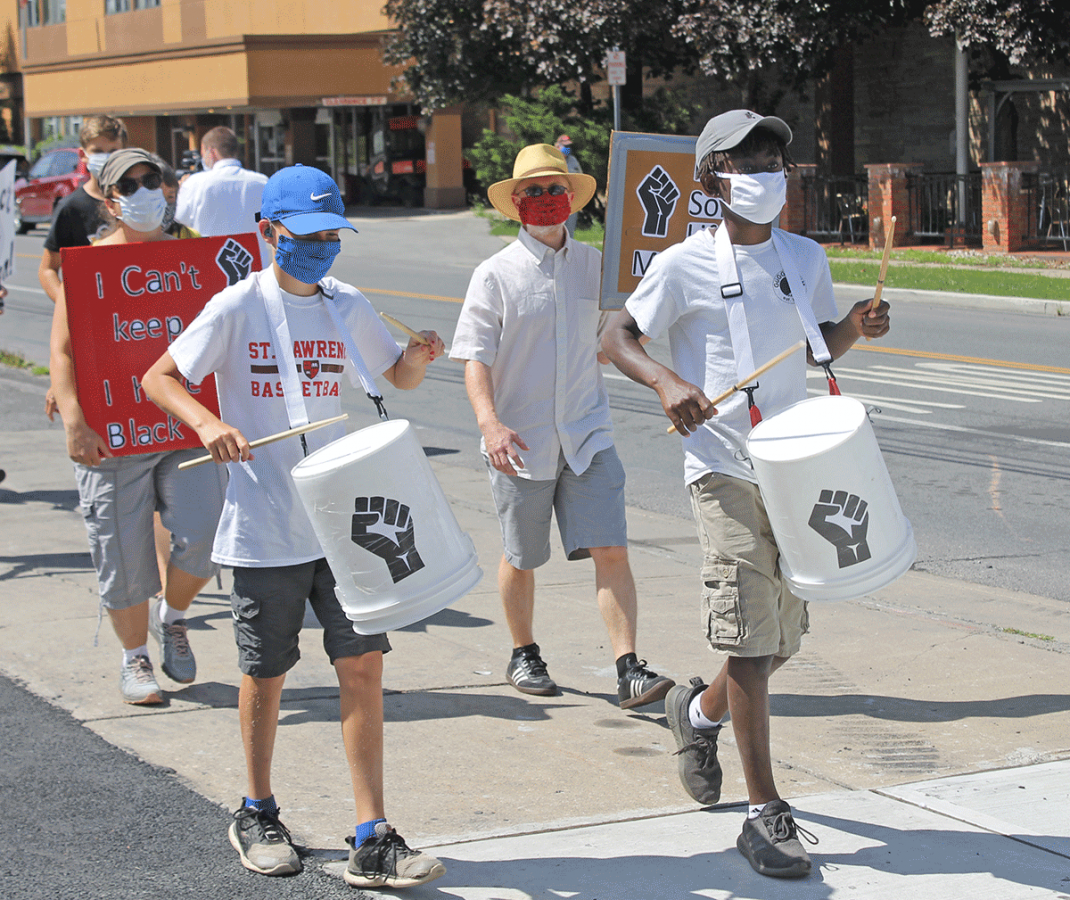 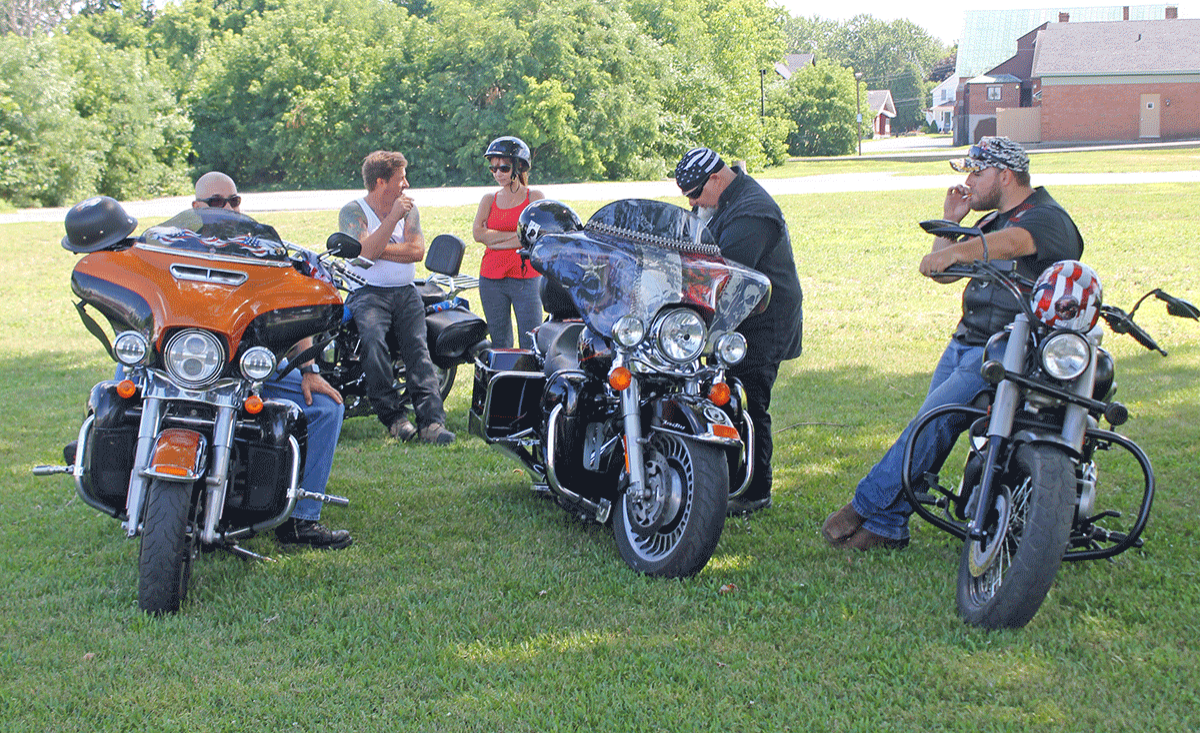 A group of motorcyclists sits across the street from the BLM rally on Saturday afternoon. One of them said they do not support the movement and were there to observe. NCNow photo by Andy Gardner.