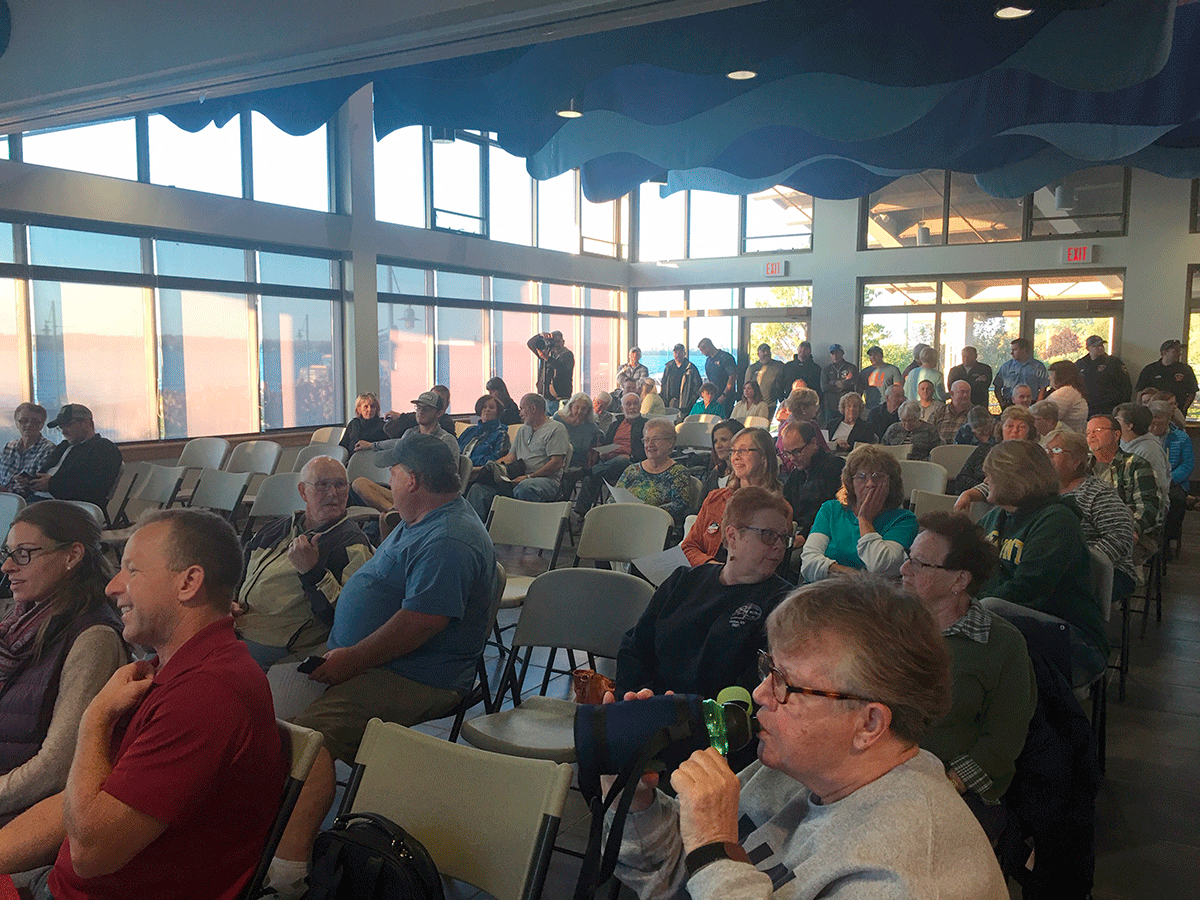 Ogdensburg voters came out to the Dobisky Center Thursday to meet candidates for city council. More than 70 people attended the event, including more than a dozen of city employees.

OGDENSBURG – More than 70 people came out to the Ogdensburg Dobisky Center to hear candidates discuss how they will tackle the city’s financial problems, grow the local economy and alleviate homeowner’s concerns over assessments.

The political forum sponsored by the Friends of the Ogdensburg Public Library did not include debate, but instead allowed candidates to share their plans for the city.

Attendees were allowed to write questions on cards, which were then sorted and selected by organizers. Nearly all of the questions surrounded assessments, economical development and how the candidates intended to reduce the city’s nearly $20 per $1,000 of assessed value property tax rate.

Meanwhile, Mayoral Candidate Michael Skelly and council candidates John Rishe and William Dillabough talked about the need for easing assessments for homeowners who maintain their property, making Ogdensburg business friendly, and focused on the need to address high taxes and reduce administrative staffing.

Mayoral Candidate Sam LaMacchia used his time to discuss his various leadership roles, the need to connect and network with state representatives, and willingness to listen to the concerns and ideas of citizens. LaMacchia also called for more positivity in his campaign and took several opportunities to compliment the other candidates for their various contributions to the city in recent years.

Many of the questions raised on the cards were shifted to a larger question that has been at the center of Ogdensburg’s political race.

Is the city business friendly?

Skelly said his own personal experiences as a business owner and discussions with other local business leaders have assured him that it is not. Skelly said he has faced numerous roadblocks while attempting to reinvest his life’s earnings back into the city through development. He cited a massive assessment hike on his home and an apartment complex he owns as well as being forced to seek a variance for parking in order to reopen the movie theater, which he purchased early this year.

Skelly and Rishe vowed to modify zoning laws to make it easier to do business in the city without as much red tape.

Rishe said Ogdensburg Bridge and Port Authority has far less restrictive zoning and has more than 85 percent of its properties occupied.

Mayor Wayne Ashley on the other hand explained that the zoning code is in place to protect residents from having a business open up in a residential area and drastically change the feel and traffic flow within a particular neighborhood. He said the variance needed by Skelly would be granted without problem for the movie theater, but said the process is important to have in place, because not all situations are the same.

Candidates Price, Power and Davis used their time to talk about how they are already planning to address the issues regarding the business atmosphere in Ogdensburg. All three said they would like to increase communication with businesses owners and discuss policy changes that could help address problems they are facing.

Incumbents also spent much of their time assuring city employees that their jobs were not in immediate danger, though nearly all incumbents acknowledged that reductions through attrition were possible.

Skelly said he knows that employees are worried about their jobs should he be elected as he, Rishe and Dillagbough have proposed cutting taxes by 25 percent in their first term. But Skelly says Ogdensburg’s workforce is already in decline. He said store closures and factory closures have already occurred and the city’s workforce must be at a size that’s reasonable for taxpayers to support.

Council candidate Steven Fisher and Councilor Jennifer Stevenson were not able to attend the meeting due to prior engagements but both provided statements for the event.