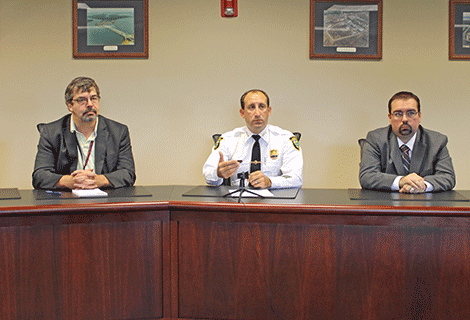 MASSENA -- The St. Lawrence County district attorney says police are not charging Massena High School vandalism suspects with a more serious offense because he feels it would be “overcharging." The DA said he also believes there was no intent to injure any animals.

He made the remarks at a Thursday morning press conference where he, Massena Police Chief Adam Love and Massena Central School Superintendent Pat Brady gave an update on the case and answered questions from the press. Love said the purpose of the event was to “address rumors or misconceptions, supply the community with as many facts as we can.”

Late on the night of June 5 and early in the morning of June 6, two groups of about 20 students in total broke into Massena High School and engaged in acts of vandalism. Part of that involved releasing two chickens and a rabbit. One of the chickens suffered a severed leg. The three animals, all of which are now in the care of a local wildlife rehabilitator, were released during the first wave, Love said.

“We know the kids we're charging entered that school. We can't 100 percent state at this time who put the animals in there,” Massena’s police chief said.

Sources have told North Country Now that the rabbit was kicked and the chicken’s leg may have been severed with a sharp cutting instrument. However, Pasqua and Love both say that’s not the case.

He also said investigators believe the chicken was bound at the legs, and that’s how the appendage was somehow severed.

St. Lawrence County’s top prosecutor said he hasn’t seen any evidence that the suspects entered the high school with the intent to commit a crime, which could elevate the misdemeanor trespass charges to felony burglary.

The incident has led to four arrests so far. The suspects, three males and a female who are ages 17 and 18, have been charged with misdemeanor counts of criminal trespass. Officials say more arrests are pending.

“They intended to go in there and commit a senior prank. We're talking about teenagers ... it’s a situation that obviously went too far and law enforcement got involved,” Pasqua said at a Thursday press conference where he, Love and Brady fielded questions from the media in regard to the case. “To charge them with a burglary when I don't think it's appropriate, I think it would be an overcharge in this situation.

“We don't have any information their intent was to hurt any animals … We have seen nothing and not been able to uncover anything in terms that was an intentional act in any way.”

A third element of the case involved students dropping a freshwater bass inside the school aquarium, which ate the other fish inside. Officials declined to offer details on who may have done that, or to provide a dollar value of the devoured fish.

“It's hard to release exactly what's going on and I believe that will hurt us with regard to the ongoing investigation,” Love said.

None of the officials would comment on how the students managed to enter the building, citing the ongoing investigation.

This photo shows the wound where one of the chickens lost a leg during the vandalism incident.

When Massena police arrested the first two suspects, their names were initially included on a police blotter report, but were redacted before it was faxed to North Country Now. Love said that was in response to a conversation he had with Pasqua where the DA said the names should not be made public, and the charging paperwork should be filed as youthful offender cases. All three officials -- Brady, Pasqua and Love -- said they were not at that time and have not since been threatened with legal action by any of the students or their parents.

Brady said the district has not received any notice of claim, which would precede a lawsuit, “nor have I had any conversations with parents over discipline that's been meted out.”

The school superintendent said he feels the legal consequences are enough to deter future groups of students from engaging in similar behavior.

“I think the message here is crystal clear: If you break into the school and commit a crime and make that mistake, there are going to be consequences,” Brady said, adding he feels the students are facing “significant consequences.”

“I think making an arrest and going through that process and having it adjudicated is not taking it lightly,” Brady said.

“We will be meeting with students early on in the year and meeting with parents and say if this is going on again, the district will pursue charges.”

He went on to praise the Massena Police Department’s investigative efforts.

“The police in this case were quick to this incident. I appreciate the work of Massena PD. They've been very cooperative, they've put a lot of hours into this case,” Brady said. “Wearing masks has made this a more complex and difficult process to go through,” said Brady referring to images on video recordings in evidence.

The superintendent said there were in-school consequences for the offending students, but federal student privacy laws bar him from commenting.

Pasqua said he has not decided on whether he will offer plea deals when the cases head to court. The defendants will appear in front of a local justice in Massena court. One of the options could be for the DA’s Office to offer what’s known as adjournment in contemplation of dismissal, also called an ACD. That means the case is adjourned for six months where the defendant must commit no other offenses and meet other conditions set by the court. If they successfully do that, the charge is dismissed.

Pasqua said he will take each defendants’ criminal history into account before deciding whether or not a plea bargain or ACD may be offered.

He said his decision will also take into consideration whether or not they were also involved in a similar vandalism incident at St. Lawrence Central High School in Brasher Falls. Officials at the Thursday press conference would not say who from Massena may have been involved. Sources have told North Country Now that three of the Massena suspects were involved in the Brasher incident where a fox, which may have been roadkill, was beheaded, gutted and dismembered and the body parts were strewn around the school.

“I obviously will take that into account when any plea offer will be made. We'll look at each student individually and their criminal record and lack thereof,” the DA said.

When reviewing the cases, Pasqua said he is not taking into consideration the suspects’ parents’ standing in the community.

“I don't know who any of the parents are with the files sitting on my desk, and it's of no concern to me,” he said.

“That's the biggest thing we need to get out is … it's not who they are, it's what the law states. We've changed our policy because of what the law is,” Love said, referring to his department’s new policy to withhold names of teens up to age 18 in misdemeanor cases.