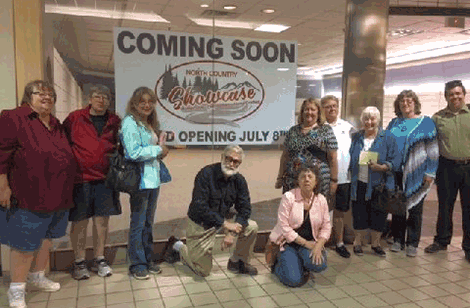 MASSENA -- People are talking. People are peeking in windows. People want to know. What’s happening at the St. Lawrence Center Mall in Massena? And what is this “North Country Showcase?”

Set to open on Saturday, July 8, North Country Showcase, Inc. is a unique marketplace that brings the best local products hand carved, hand blown, woven, crafted and painted, all produced in the North Country region, under one roof.

“We have a two-fold mission,” says Karen St. Hilaire, Showcase President and former County Administrator, “to provide one central location for producers and customers, and, later to create a larger online market through e-commerce.

“But the overarching goal,” she says, “is the expansion of local business and the eventual need for producers to hire more people, increasing job opportunities here.”

Legally organized as a public benefit corporation, the North Country Showcase, Inc. is “investor-owned,” which means community people believe in the idea, want to see it work and are willing to put up money to be shareholders in the venture and see it grow.

The idea for the Showcase grew out of an online think tank called “RIOT, Re-imagining Our Tomorrow,” created on Facebook by St. Hilaire in November, 2015, when Alcoa announced that the company would be pulling out of St. Lawrence County. The aluminum giant, established here in 1902, once employed 2,000 people. Generations worked the plant, joined later by Reynolds Metals and General Motors Powertrain in 1959. Now, GM is gone and Reynolds was swallowed up by Alcoa, leaving behind a total of 750 combined jobs. Following the 2015 announcement, both the state and the federal governments stepped in and bought the community some time, postponing the company’s departure until 2018.

“That’s next year,” says St. Hilaire, “and we needed to furiously look for alternatives.”

RIOT is located on Facebook, where people began to post ideas aimed at strengthening the North Country’s economy. From suggestions of tiny houses for sale to FEMA to monster greenhouses, which would grow food year for distribution year round, the RIOT page became a home for thoughts, ideas and concepts, she says, some far out, others practical.

One design took traction: Create one central place where woodworkers, jewelry makers, basket weavers, maple processors and other creative producers from the seven-county region could showcase what they make, and offer their products for sale.

In order for the idea to work, start-up funds were needed and interested individuals were offered the chance to make an initial investment, each allowed purchasing up to 10 shares of the business at $500 each. Right now there are 20 shareholders who have invested an equivalent of $13,000. These “shareholders” form the nine-person Board of Directors.

“It has taken a lot of work,” says St. Hilaire, “but we are now a corporation, governed by SEC regulations and limited to a total of 35 shareholders, each of whom can own up to 10 shares.”

Initially, the RIOT group explored the possibility of buying the St. Lawrence Center Mall outright since it was on the market, but found that those plans were too ambitious for a first project.

“We looked at many ideas for a location, not just the mall,” says St. Hilaire. “Did we want it downtown in a community? Did we want it as a stand-alone? We knew we had the interest of our producers, but we also wanted parking, customer traffic, the ability to expand.”

In the meantime, the mall was purchased by the Montreal-based Shapiro Group, which had plans of its own for renovating the aging facility with a strong eye to its future as a retailer and entertainment center.

After several conversations with the new owners, St. Hilaire said the shareholders agreed that the new owner’s plans for the mall offered promise for a vital and exciting shopping destination. At the end of May, rent was paid, a lease was signed and the North Country Showcase had a home.

Almost two dozen vendors have already signed on and will have stocked the shelves by July 8:

St. Hilaire says both the shareholders and the board members have been working on the storefront for the last three weeks, cleaning, painting, replacing carpet, adding lighting and polishing everything in preparation for the grand opening July 8.

“We believe this business is unique in its scope and that the ‘one stop’ approach will be a draw for tourists as well as residents of the North Country who want to purchase local products but who don’t want to travel long distances.

“There’s a lot of talent here,” she says, “and it’s our hope that this small step will lead to a bigger economic walk for the entire region.”

Pat McKeown is a shareholder in the North Country Showcase, Inc. project and Chair of the Media Committee.