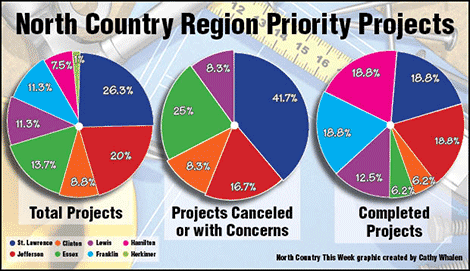 St. Lawrence County was awarded 26.3 percent of North Country Regional Economic Development Council ‘priority’ projects, but has the highest rate of projects canceled or ‘with concerns,’ 41.7 percent. Our county has only 18.8 percent of completed projects

St. Lawrence County has a higher failure rate for state-funded economic development projects than most neighboring counties in the North Country.

Of 12 “priority projects” funded during the past six years by the eight-county North Country Regional Economic Development Council that have been put on hold, five -- or 41.7 percent -- are in St. Lawrence County.

While St. Lawrence County was awarded 26.3 percent of NCREDC projects in the past six years, the county accounts for just three of the region’s 16 completed projects, or 18.8 percent.

Since 2011, NCREDC has awarded St. Lawrence County 21 of the North Country region’s 78 “priority projects” -- deemed to be the most significant business ventures funded by NCREDC.

Four of those 21 were canceled and one is stalled, according to NCREDC’s 2017-18 progress report (see story at right). Expansions at Ogdensburg International Airport and Curran Renewable Energy in Massena and rehabilitation of railroad tracks in Newton Falls have been completed, and the rest are listed as “on schedule.”

Companies receiving Regional Economic Development Council money must first build their project and, in some cases, hire a stated number of employees before getting the grant as a reimbursement.

If a project is canceled or the funding is turned down, the funding remains in the North Country and is allocated to future projects within the region.

Empire State Development spokesman Jason Conwall said “it usually ends up supporting more than one project or combined into a larger deal. It's more like a pot of funds that can be committed to projects in the region than it is a clean line from Project A to Project B. I should also note that all reallocations are approved by the Regional Economic Development Council during a public meeting.” ESD administers Regional Economic Development Council funding.

The North Country is about in the middle of the 10-region pack state-wide for both completed priority projects and those that have been canceled or have ongoing concerns.

Our region is listed with nine canceled projects and three with concerns, which is 15 percent of 78 priority projects.

How the Program Works

The councils, which include representatives from private and public enterprises, either seek out projects in their region or have them submitted through the state Consolidated Funding Application, commonly called a CFA.

“It’s one application you can apply to. Basically, it’s a portal to every state funding,” Conwall said.

The councils take the projects they receive, score them out of 20 and forward them to the state, who assigns up to an extra 80 points. The highest scored projects receive funding. “Priority projects” have to be considered “transformative and transformational” to its region, and they automatically receive a score of 20 from its respective regional council.

The funding can come from a number of different programs, Conwall said.

“A lot of the money here used to be member items … legislators picking pet projects and earmarking money in the budget … A good way to think about the regional councils is it’s not a new funding program. It’s a new process for how the state decides where funding goes. We believe it’s a much better approach to doing it because projects have to have merit.”

Job creation is not always necessary to get funding, but some of the programs that feed funding through the regional councils could require it.

“At the end of the day, not every project needs job creation … some of it is infrastructure or environmental remediation,” Conwall said.

A statewide online database at https://nyscfaprojectdata.ny.gov/cfadatatable shows that Empire State Development administered funding for 20 out of the 21 priority projects awarded in St. Lawrence County between 2011 and 2016. One project didn’t come up when searched in the database, a failed attempt by C Speed to build a radar manufacturing facility in Potsdam.