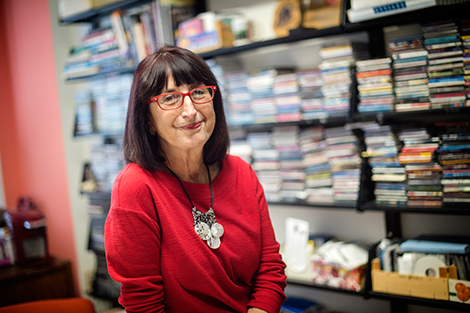 North Country Public Radio’s Director of Content and Broadcasting Jackie Sauter will retire at the end of the year.

CANTON -- As North Country Public Radio concludes their 50th anniversary year, the station is holding an all-day open house Tuesday, Dec. 11 between 7:30 a.m.-7 p.m. at its studios located at 80 E. Main St. (US Route 11) in Canton.

NCPR will also use this occasion to give friends and listeners an opportunity to thank and congratulate Director of Content and Broadcasting Jackie Sauter, who is retiring at the end of 2018.

“Jackie is the heart and backbone of our station,” said Station Manager Ellen Rocco. “She has been at the station since 1971, starting just as she completed her college education at St. Lawrence University. She has shaped the direction and sound of NCPR through almost five decades.”

Jackie Sauter had this to say about her tenure at NCPR: “It’s been an honor to be a part of this amazing station, and participate over the years in its growth into an important regional resource. I’ve loved every minute of my work in public radio and am excited to see what lies ahead. I’ll be listening and cheering on the NCPR team.”

Jackie Sauter started her career at NCPR as a part-time secretary, in the days when the station had a single transmitter and was known as WSLU-FM.

Along the way, Jackie served as news director and reporter (in the 1970s), as Program Director, and, in recent years, as Director of Content and Broadcasting.

“Jackie’s impact on NCPR is heard every day on our airwaves,” said Ms. Rocco. “What listeners may not realize is how well-respected Jackie is throughout this country’s public radio system. She has led the way in how stations think about serving the American public with topnotch broadcast and digital content, and she has been a friend and mentor to so many in our profession.”

Everyone is invited to stop by the station for refreshments, for an opportunity to share a message of congratulations with Jackie and other staff, and to take a tour of NCPR’s studios.

Morning visitors will find coffee and baked treats; through the day we’ll have finger food and sandwiches on hand; and, the cake-cutting will take place at about 5:30 pm.