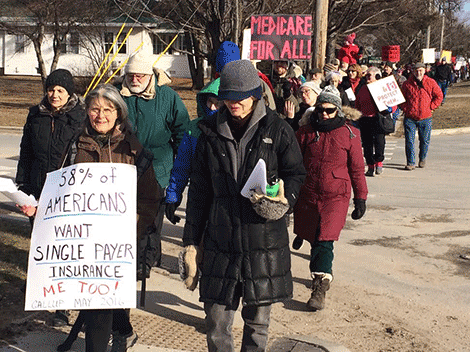 About 300 people march along Main Street in Canton on Sunday to demonstrate their opposition to efforts to repeal the federal Affordable Care Act.

CANTON -- Assemblywoman Addie A.E. Jenne, D-Theresa, says the turnout in Canton this weekend for a march to protest the Affordable Care Act is “a demonstration of support for a health care system that provides access to quality health care for all Americans.”

“The Affordable Care Act has provided millions of additional Americans with health care coverage and has also meant that more patients being treated at our financially-strapped rural hospitals have insurance coverage aiding those institutions' bottom lines,” a news release from her office says.

She said health care costs were “skyrocketing” before the Affordable Care Act was signed into law.

Assemblywoman Jenne noted the new law included provisions, including allowing young people to remain on their parents' insurance plans until age 26 as they started their work careers typically at the lowest rungs on the income ladder and prohibited insurance companies from denying coverage to people with pre-exisitng conditions.

She said a speaker at the rally Sunday in Canton that drew a crowd of approximately 300 people demonstrated the positive strides that have been made as a result of the federal legislation.

The unidentified woman, now in her mid 20s, said she was diagnosed with having an inherited gene mutation that makes her a high risk for breast or ovarian cancer when she was 22.

She said that diagnosis was devastating but the provisions of the Affordable Care Act meant she could be screened to see if she had the gene without being concerned that a pre-existing condition would impact her ability to get health insurance. She also said it meant she could get the twice a year screenings recommended for patients with the gene mutation.

"The Affordable Care Act was a step in the right direction, and this young woman's story is just one of many that demonstrate its merits. But we know the federal legislation still has its problems. Health care is still inequitable, keeps some people from accessing basic health care and its costs are a challenge for many of our working poor families," Assemblywoman Jenne said.

She said those concerns led her to co-sponsor legislation in 2015 and 2016 calling for the implementation of a universal health care plan to cover every New York State resident, known as the New York Health Act (A.5062-A).

"I have supported the single payer system for years. Health care is a fundamental human right. It's not a privilege or an entitlement. Access to quality health care shouldn't be a privilege only available to our wealthiest families, and North Country residents shouldn't be forced to make life and death decisions based on concern that being treated for health issues could drive them into bankruptcy. I think including everyone in one system is the best way to control and drive down costs,” she said.

She said the current debate over health care at the federal level makes the timing of the effort to enact a universal health care plan in the state even more critical.

"People are still racking up huge bills because of high co-pays and skyrocketing premiums. We have an opportunity to put people over profits and continue the goal to make sure hard working middle-class families have the same access to quality health care as the wealthiest New Yorkers. This bill has passed the state Assembly in 2015 and 2016 and I expect that it will be brought to a vote again this year. The bill has never made it out of committee in the state Senate, and that needs to happen this year," she said.

The New York Health Act would establish a universal health care system, known as New York Health, and would expand coverage eligibility to include all residents, regardless of wealth, income, age or health status.

In addition, every enrollee would have access to the full range of doctors and service providers offered. Benefits would include comprehensive inpatient and outpatient care, primary and preventive care, prescription drug costs, laboratory testing, rehabilitative care, dental, vision and hearing care.

As with private insurance, out-of-state care would be covered. both when residents are traveling and need health services or when there is a clinical reason to receive care outside the state, Jenne said in a news release.

Those providing or coordinating care would be fully paid by New York Health, with no co-pays or other charges to patients. Funding for the system would be based on a shared 80/20 employer/employee payroll tax contribution, eliminating the “regressive tax” of premiums, co-pays and deductibles currently imposed on patients regardless of their ability to pay.

With health care costs increasing nationally, considerable research has shown that a universal health care system would reduce costs and pass savings along to patients, consumers and taxpayers.

A 2009 state Department of Health report showed that this type of system would provide the lowest cost for universal coverage in comparison to systems relying on private and employer-based insurance. In addition, the Centers for Disease Control and Prevention cites wellness and preventive health care as key measures that will help people live longer, more productive lives while reducing overall health care costs.

She said the universal health care plan would mean insurance companies would no longer serve as the middleman in the health care system between patients and their providers.

"This is an issue that impacts each and every resident in New York State - as well as every employer. We can and must do better, and now is time for action," she said.

The governor's plan consists of a three-pronged approach aimed at preventing prescription drug price gouging in the Medicaid program, imposing a surcharge on drug manufacturers that charge exorbitant prices for their product and protect ratepayers from abusive business practices by intermediaries that drive up drug prices

"We have far too many companies selling their products at exorbitant prices that are unrelated to the cost of developing and making those drugs and that is placing a major drain on health care costs in our state and nation. I'm please to see Gov. Cuomo focusing on steps that can be taken to address this issue," Jenne said.

But the assembly member said it will also be important to make sure any legislation aimed at containing the cost of prescription drugs doesn't have an unanticipated impact that gives large, national drug chains a distinct advantage over regional companies such as Kinney Drugs in the North Country.

"I will be focused on insuring that efforts to cut the cost of prescription drugs, which I obviously support, isn't based on a business model that would force a company like Kinney Drugs to shut its doors or jeopardize its valuable services, such as jeopardizing its home delivery program. We don't want the cost of implementing the program be overshadowed by the negative impact on the state's economy and Medicaid costs," Jenne said.

She said as changes are made in the health care system it will remain critically important to make sure medical professionals remain the decision makers in terms of a patient's health.