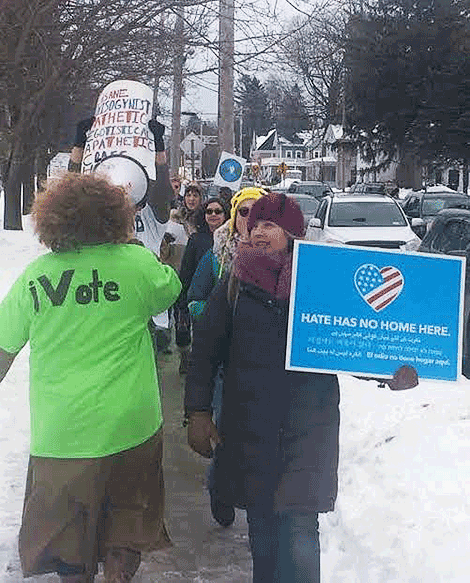 CANTON — North Country Assemblywoman Addie A.E. Jenne said she was encouraged by the enthusiasm, engagement and willingness to stand up for policy issues of importance she saw at rallies and womens' marches this past weekend in Canton and Watertown.

"It’s amazing to see so many people come out this morning for this call to action. We are trying to address social inequities, social justice," Assemblywoman Jenne said as she addressed a crowd of just under 200 people at a pre-march rally at the Unitarian Universalist Church in Canton.

"We are not going away. We’re never going to give up. We will not be shushed, shushed,” she said.

Jenne said the crowds attending the two rallies were drawn by a variety of issues ranging from federal policy actions on health care, and education, cuts targeting children and environmental protections as well as the current state of public discourse on race and sexual assaults and sexual harassment.

"At the end of the day what we are talking about today is social justice. We are trying to address social inequities and support the time honored ideals our country was founded on," she said.

Elizabeth Bollt, who organized the Canton march, said the theme of this year's event was "Power to the Polls."

Bollt said a voter registration table was set up at the event, and she stressed volunteers would be canvassing and working to get out the vote in November.

Jenne said local residents have their voices heard when they go to the polls on Election Day.

“It is in communities like this in the North Country, where we know how to strike the balance; communities where we respect and value each other," she said.

"It’s places like this one that support young women running for office that have crazy ideas, like the importance of providing our citizens with quality health care and equitable funding for our schools, raising the minimum wage and expanding family paid leave to allow moms to stay home longer with their babies,” Assemblywoman Jenne added.

She said she will continue to advocate to allow women to continue to make their own health care decisions.

"We wake up and find a women's right to choose is in the crosshairs again. We've got to work together so we are able to make our own health care decisions that will determine our futures," according to Jenne.

Jenne, speaking at the rally in Watertown, said the #MeToo movement is a sign that women are demanding changes in the workplace and will no longer remain silent about sexual harassment and sexual assaults.

"We have had a flurry of women speak out very courageously about the pain that they have suffered - pain that has been long and systemic," she said.

"We have institutional inequities. It is extremely important as we get our legs underneath us as a movement that we not just be satisfied that a couple of rich white men have lost their careers or had their careers knocked off track," the assemblywoman stressed.

"We have to make sure that we turn these high profile incidents into real justice for working women - store clerks, clerical workers on our college campuses ... - and people who have been discriminated against and oppressed for years and years, generation after generation," Assemblywoman Jenne said.

"We need to get long-term policies in place to protect all those who have been abused or harassed including those suffering at the lower end of the economic scale so they know they will have justice so they will be able to live their lives with dignity," she noted.

The assemblywoman said she was also impressed to look out at the crowd at both rallies and see the faces of so many men.

"This movement is as much about men as it is about women. The things that move me have as much to do about the men in my life - my son, my father, my brother, my nephews, the men in my life that I love, the men in our community we love that we send off to war to protect the ideals we are here fighting for today," Jenne said.