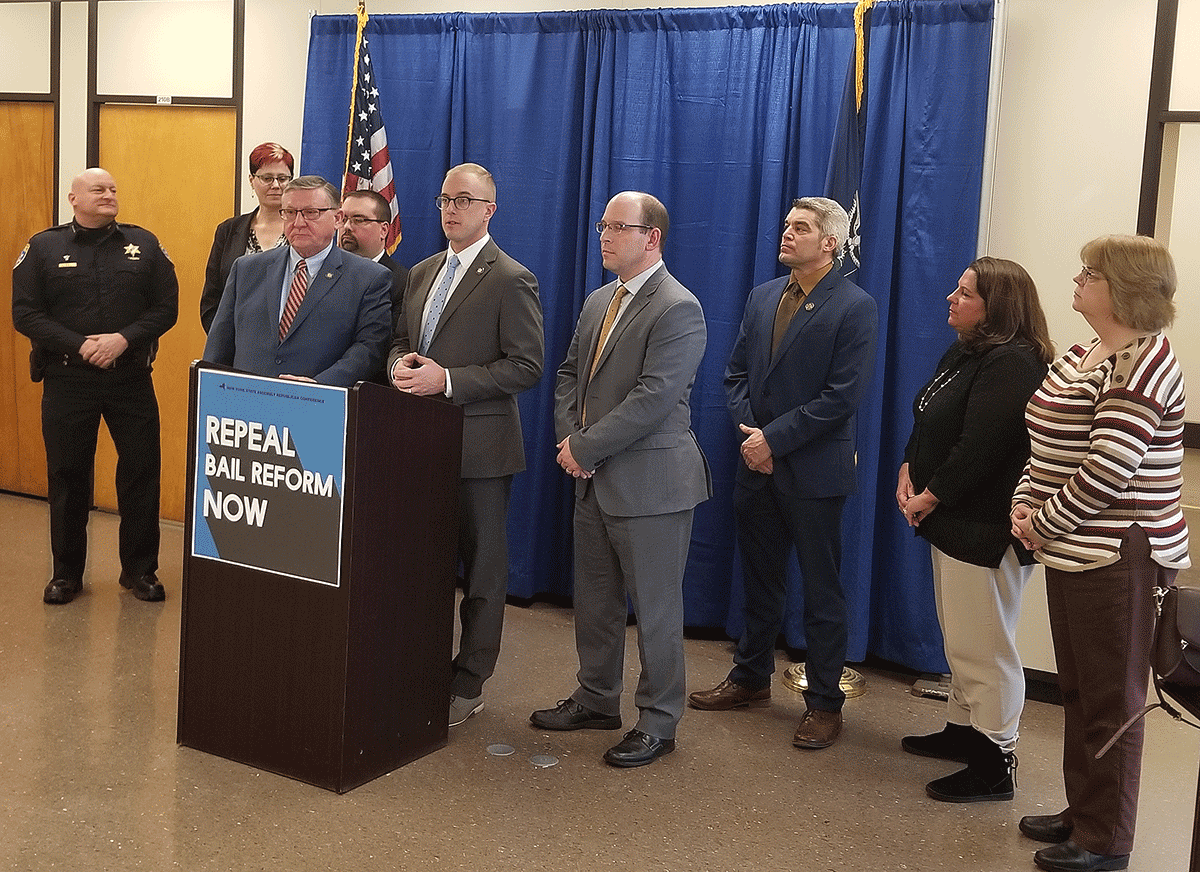 Assemblymen Mark Walczyk (R -Watertown) and Ken Blankenbush (R-Black River) were joined by county sheriffs, district attorneys and victim advocates calling for a full repeal of the “Victims Abuse Act of 2019” at a press conference Thursday.

The “Victims Abuse Act of 2019” was crammed into last year’s state budget, said a press release from Walczyk’s office. Since these reforms took effect on Jan. 1, 2020, many officials from across the state have raised objections, saying criminals have more rights than victims of crimes, Walczyk’s office said.

“Every day that goes by there is another headline about a criminal who was caught and released back on the street, allowing them to rob banks, break into homes or even domestically abuse a victim, and with continued inaction by legislative leadership in Albany, we continue to jeopardize public safety,” said Walczyk. “I’m proud to stand alongside Assemblyman Blankenbush and public safety experts who joined us today to raise the issue. It’s time to fully repeal ‘catch and release,’ we have a responsibility to protect the public.”

“The so-called bail ‘reforms’ have negatively impacted New Yorkers across the state. I have heard countless stories of families losing loved ones due to dangerous criminals being released back into neighborhoods,” said Blankenbush. “We need to listen to the outcry from our law enforcement agencies, judges and district attorneys. We need to look at the insurmountable evidence that supports a full repeal. We can’t waste another day. We need to act now.”

“The gutting of judicial discretion imposed by this bail reform law creates a state of lawlessness and imposes a terrible burden on law enforcement officials,” said St. Lawrence County District Attorney Gary Pasqua. “This is a gross overreach on the judicial system and places the safety of communities at a serious risk.”

“I fear for the safety of our communities and law enforcement officials as a result of this terrible law,” said St. Lawrence County Sheriff Brooks Bigwarf. “I believe the bail system warranted reform, but it should have been conducted following public hearings with testimony from legal experts and law enforcement. This law completely ignores the expertise of criminal justice professionals and innocent people are forced to pay the price.”

"Since the criminal justice reforms took effect on January 1, I've had serious concerns about how this legislation will accurately safeguard the public, and I'm even more concerned for the well-being of victims of domestic violence," said Jill Parker, Executive Director of the VAC. "I applaud Assemblymembers Blankenbush and Walczyk for being at the forefront of this issue and fighting for victims."

“We at Renewal House, are very concerned about the safely of victims and we are at the ready to help those that have been impacted by domestic violence and sexual assault," said Ilene Burke, executive director of Renewal House. “I would like to thank Assemblymembers Blankenbush and Walczyk for being advocates for victims and working to strengthen public safety."

Blankenbush, Walczyk and their colleagues support the legislation which would repeal the criminal justice reforms, the press release said.

In addition to these measures, Assemblyman Walczyk continues to urge New Yorkers to call for a repeal of these laws by signing his petition at https://forms.gle/p9EQumD1Je8NjF2f8