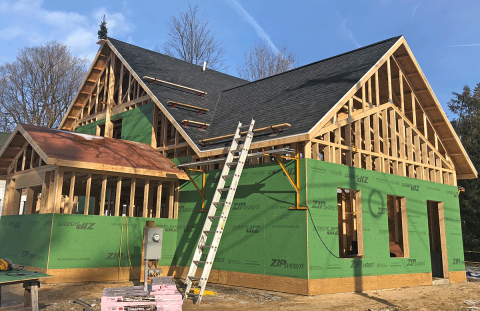 POTSDAM -- New house starts in the village have been few and far between in recent years, but Scanlon Home Care Service is building a new home from the ground up at the corner of Waverly and Broad streets.

Those passing by the project may have noticed the live evergreen tree on the highest peak of the new home being built at 2 Broad St.

The significance of the tree is more than a holiday tradition, according to builder Everett Scanlon. It is an ancient construction tradition called “topping out,” which is performed when the last beam is placed or the highest peak of construction is complete.

Placing a tree atop a new building appeases the tree-dwelling spirits displaced in its construction, according to Scandinavian mythology. There is evidence that this practice dates back to as early as 700AD.

The topping-out practice is not new to Scanlon and his construction crew. They have observed this tradition with each new home they have built since the company’s origin in 1986. The 2 Broad St. topping out was performed on Dec. 4, 2018.

The village location was chosen by Scanlon to resurrect the lot, which had been left vacant after a house there burned.

Scanlon learned from local real estate agents that there is a need to provide new housing within the village. With the growth of the hospital and colleges, homebuyers relocating to the area often express an interest to purchase new homes within the village but none have been available.

The new home is expected to be completed and on the market by April 2019. The 1500-plus square foot two-story home includes three bedrooms, including a master suite on the first floor, two and a half bathrooms, an open floor plan with vaulted ceilings and hardwood flooring, high efficiency windows, and in-floor radiant heating. In the kitchen is white cabinetry, granite counter tops, and stainless steel appliances.