Lisbon residents call for changes to school's inclusion board 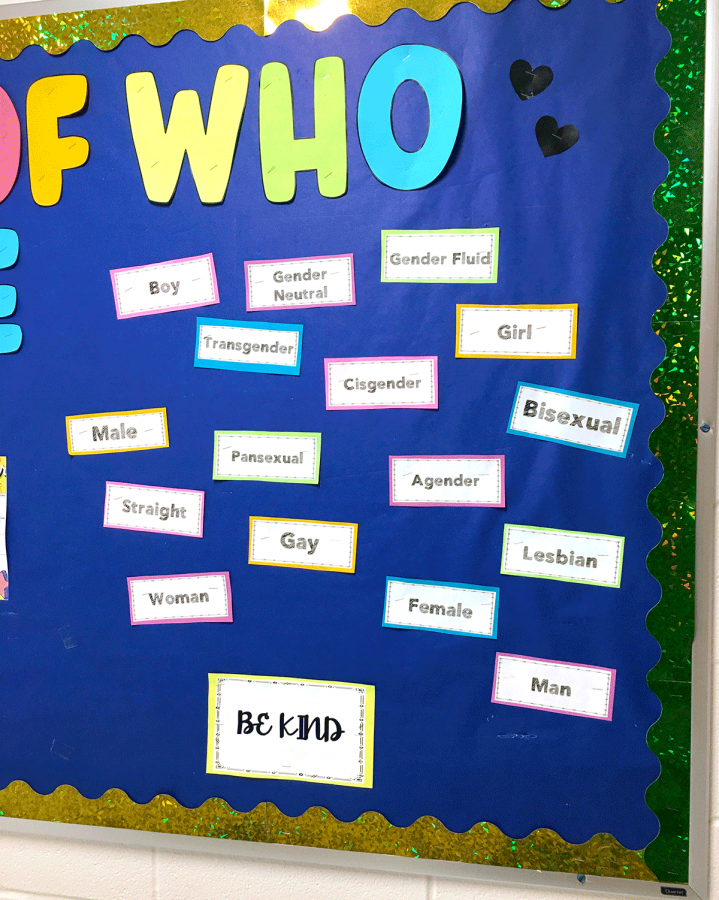 Above is a bulletin board at Lisbon Central School which is causing concerns among some residents. Photo submitted

LISBON – A number of residents are calling for changes or removal of an “inclusion board” in a hallway at Lisbon Central School Board which includes labels for several gender types and sexual orientations.

The bulletin board says “Be Proud of Who You Are” in rainbow-colored letters. A rainbow is also present on the board.

It also includes a variety of sexual orientation labels as well, including straight, gay, pansexual, bisexual and lesbian.

Below the labels a card reads “Be Kind.” Additionally, the bulletin board included a newsletter promoting bisexuality week.

Some parents are upset because the board includes references to sexuality. They say that if such topics are to be tackled at all they should take place in classrooms rather than displayed in the hall.

“If children have questions about their sexuality and they feel they can't talk to their parents, there is a councilor and teachers they can talk to. Sexuality should be kept out of schools. I have always encouraged children to focus on school,” Lisbon resident Jenna Swan said in a letter she sent to the board of education.

A Facebook post raising concern about the bulletin board garnered well over 200 comments in a few hours, including some in support and opposition to the board. Criticism of the bulletin board ranged from calls for total removal to modifications, while supporters offered praise to the district.

Lisbon resident Naomi Teele, who posted pictures of the board on social media, said that while she wasn’t angry she had concerns about the content.

Teele and others attended a recent school board meeting, hoping to get answers about the bulletin board, but other than a few parents expressing discontent, not much conversation was had.

Superintendent Patrick Farrand said the board was put up to help students who might be struggling.

“This bulletin board represents a group of people who have otherwise been marginalized in schools and social settings and they need to know it is OK to be proud of who they are,” he said.

Farrand said mental health has been a growing concern across the nation and said local schools are responding by making sure kids are feeling safe and accepted.

“Thoughts of suicide, depression, anxiety, and mental health are more prevalent since the COVID-19 pandemic and there is a great need to support our students with professionals in the school system. Knowing students face these challenges as a result of peer pressure, family stress, academic expectations and the challenges of life, we are providing additional support and services through the hiring of a Social Worker and Licensed Mental Health Worker. We want to make sure that all students have access to a support system,” he said.

But Teele says the efforts to improve mental health are creating confusion.

She says the bulletin board goes a bit too far by potentially exposing children to sexual content they aren’t ready to process. At the recent board meeting, Lisbon resident John Carlin pointed out that if he had worn a shirt with some of the words on the board when he was in high school, he would have been asked to remove it.

In days following the meeting, Teele asked the district to remove the labels from the bulletin board in the form of a letter.

“I’m asking if the words could be removed,” Teele wrote in an email to the school.

Teele questioned if the board was promoting a healthy learning environment and raised concerns about exposing students to content they may not be mature enough to understand.

“The power of suggestion is robbing them of their innocence. Children are too young to comprehend these words. Exposing them is leading to curiosity. These are adult conversations and children should be carefully counseled with parents,” she said.

“These are adult conversations and children should be taught how to treat (people) in general regardless of sexuality. Love without labeling,” she said.

Farrand says that students are being exposed to various terms and ideas while in school and elsewhere and the inclusion bulletin board is about understanding and accepting a variety of walks of life.

“Terms related to sexual identity or orientation are throughout informational sources and communications that our students are exposed to. We do provide instruction in the classroom that identifies some vocabulary terms so this could be something that would be in a classroom but would only allow a limited number of students to have some exposure to the information. Having it in the hallway allows those who are silent on their needs or personal development some validation that it is OK to be who you are. Some people are willing to express who they are and some are not,” he said.

Farrand noted that the content on the board rotates throughout the school year, though he could not provide a time frame for when it might change.

“The board has been used for various informational displays and the information rotates throughout the school year. There will be new information related to students and their needs which is current and relevant for students after this display period is over,” he said.

Many parents online, in discussions and at the meeting drew particular concerns about the potential exposure of sexual orientations to elementary students.

Farrand said the board is located in a place where elementary students are unlikely to see it. He said it’s far more likely to be seen by students in grades 7-12.

“Adolescence and puberty are important times in individuals lives where many biological and social changes take place for all students. Students in grades 7-12 are exposed to a lot of new information and experiences. Some of this exposure is related to sexual orientation. Students who are different or who do not fit the stereotypical norm are oftentimes harassed and bullied because of how they chose to express themselves. Having information that is visible to all students stating that it is ok to be proud of who they are and they are able to feel supported only ensures the safety and wellbeing for all students,” Farrand said.

Farrand said the school board is open to hearing from the public about the board, but said that the district will ultimately determine the content on the board.

“We are always open to community input and ideas to share to show support for all students in our school system. Bulletin boards and messaging is something that is established by our professional educators in the building ensuring they are doing what is best for all students. The school board is not responsible for approving day-to-day instruction and materials. They are responsible for overseeing policy. This board is in line with school district policy, specifically that we do not and will not discriminate against others based on their identified differences,” he said.

Residents like Teele and Swan however are hoping for a change.

Swan said students should be in school to learn math rather than worrying about sexual orientation.

“There's plenty of time for that after graduation. Be proud of who you are should be kept but instead of seeing personal sexual labels let's use words like Be kind, be honest, be helpful and be a good citizen!” She wrote.

Teele says she’s encouraging Lisbon residents to attend the next school board meeting to share their thoughts on the subject.