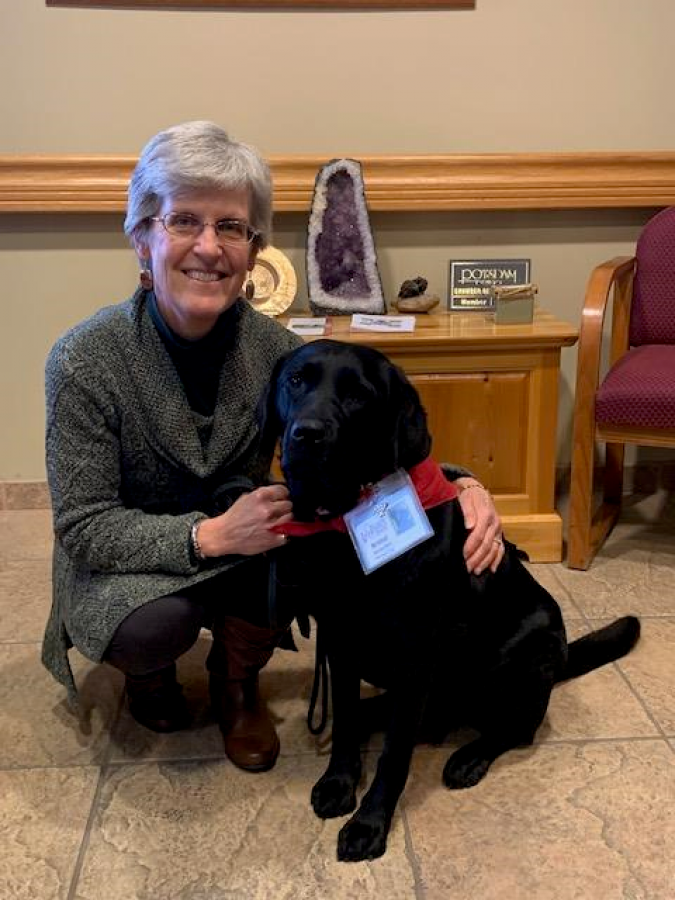 Linda Caamaño is pictured above with Bristol, a 3-year old black lab who is a certified therapy dog through Therapy Dogs International. She is used by Hospice to visit patients in nursing home and private homes as requested. Photo submited by Linda Caamaño

Hospice and Palliative Care of St. Lawrence Valley is in critical need of volunteers, especially in the Massena and Ogdensburg areas, as the organization continues to care for sick and dying North Country residents.

A combination of historically lower numbers of volunteers in the Massena and Ogdensburg areas, people moving from the area and others who stop volunteering due to old age has led to the shortage, according to Linda Caamaño.

And so far, those volunteers have not been replaced at a pace to keep up with the demand. Caamaño said there have always been fewer volunteers in the Massena and Ogdensburg areas. “We’d love to have more.”

She says Hospice receives many requests from RiverLedge nursing home in Ogdensburg, as well as private homes. It is becoming harder to find volunteers with dwindling numbers.

She has been forced to pull volunteers from Canton and send them to Ogdensburg. Potsdam volunteers are being sent to Massena.

This is causing volunteers to spend nearly double the amount of time after considering driving time, she said.

On average, Hospice has 65 volunteers with 25-30 active at any given time, Caamaño said. Some are snowbirds, and others are college students who go home, which leaves Hospice short-handed.

Those volunteers assist with daily lives of around 60-65 people under Hospice care. Volunteers usually are assigned to one client and spend 1-3 hours a week with them.

Volunteers help give other family members a break from their sick relatives. They play games, watch TV, look through old photos and any other activity that the client wishes to do and the volunteer feels comfortable participating in.

Ginger Storey-Welch, Colton, says that being a volunteer is “deeply rewarding and meaningful.”

She says she tries to get patients outdoors whenever possible, especially ones who have spent much of their lives outside.

“Johnny Cash music woke up the mind of an old farmer with dementia, and he began speaking in sentences, saying ‘you know, I used to go to barn dances … and I would raise hell!’”

One woman Welch cares for found meaning in buying food for her adult son.

She said the patient showed that through her words: “Oh, he likes those! Let’s get two.”

Welch was once asked to join a car ride along with a dying woman and her husband. Welch was needed to take care of their walkers, pump gas, and be in the backseat “just in case.”

“We drove down increasingly narrower country roads until at last she was on a bumpy dirt road with branches scraping the car. At the end of this road was their honeymoon site from over 70 years earlier. I sat in the backseat marveling that I got to witness this beautiful moment. They were both gone within three months,” Welch said.

Training to be a volunteer takes about 15 hours spread over a Saturday and two evenings during the week. Three hours of additional online competency testing is also required.

“People can make the decision at the end of training if they want to do this,” Caamaño said.

Speakers from Hospice give presentations on nursing, social, chaplain services, palliative care and bereavement. The executive director also gives a general info presentation. There are also videos and discussions to round out training.

“There is more to it than people understand,” Caamaño said.

Most people do end up volunteering, but there are some who decide that isn’t for them.

Caamaño hopes more people consider volunteering if only to give them a better understanding of how the program works.

“Knowledge is power – when you understand something it is not as scary,” she said.