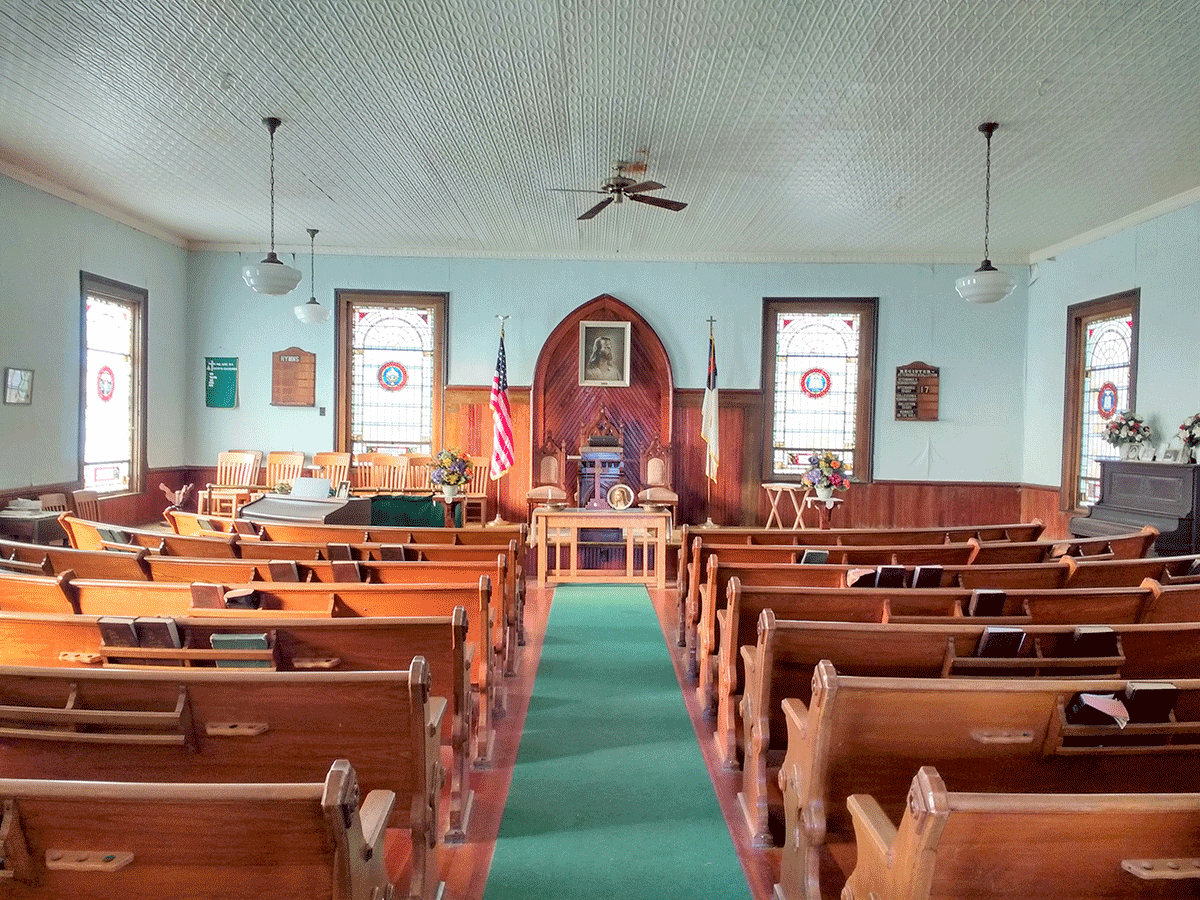 An inside view of the building. Submitted photo.

MADRID — The trustees of the historic Nevin Memorial Church in Lisbon have donated their church building to the St. Lawrence Power & Equipment Museum.

Preparations are underway to disassemble and move the building to the Museum where it will be reconstructed and restored, said a press release from the Museum. An effort is underway to collect memorabilia about the structure to be displayed at the building.

The church will be relocated at the Museum’s village green. It will be located on its south end, balancing the schoolhouse located at the north, and joining others including the gas station and shoe shop.

The village green has been graded and foundations for the church have already been constructed. When completed, the church will be available for public use.

The first phase of the move involves separation of the walls and salvage of floor and ceiling elements. This work is being overseen by Museum trustee and treasurer Lee Dezell. This will be followed by transport to the Museum and re-erection on the newly constructed foundation organized by Museum trustee Dave Gibson. A new roof will be constructed, and the stained glass windows will be repaired and reinstalled.

Phase 1 has an estimated cost of $50,000. A donor has offered to match the next $25,000 received. The Museum hopes for the loan of a crane and flatbed trailer to facilitate moving eight wall sections up to 24 feet long and standing them on their new foundation. The Museum expects the building to be up and sealed against weather this summer.

The second phase will be restoration, returning the building to near-original condition including some of the new features added over the years. Its estimated cost is another $50,000 depending on what materials used and what is revealed during disassembly and by historical records. This work will begin in 2022.

The Church closed its doors in December of 2019 after 164 years of worship. Anticipating the closure, church trustee Mark Armstrong addressed the Museum’s board and offered the building and its contents to the Museum. After studying the opportunity, the Board voted to accept the offer and gained title to the church in November of last year.

The Museum and Town Historian LaFaver are asking members of the community to share photos and memories of the church. Some architectural features may have been removed, and photographic records would help greatly. Copies of records can be made so original works can be returned to their owners.

The church is located at 1705 County Route 31 near Lisbon. It is a white, single-story building 1,700 square feet in area. It has 12 double rows of pews, patterned tin ceiling, and wainscotting on the walls.

According to David E. Martin of The Horwood Stained Glass Museum in Ogdensburg, its 12 windows were made by Harry J. Horwood of the well-known Horwood family of stained glass artists in Ogdensburg and elsewhere. These will be preserved along with the church’s pews, alter, and other features.