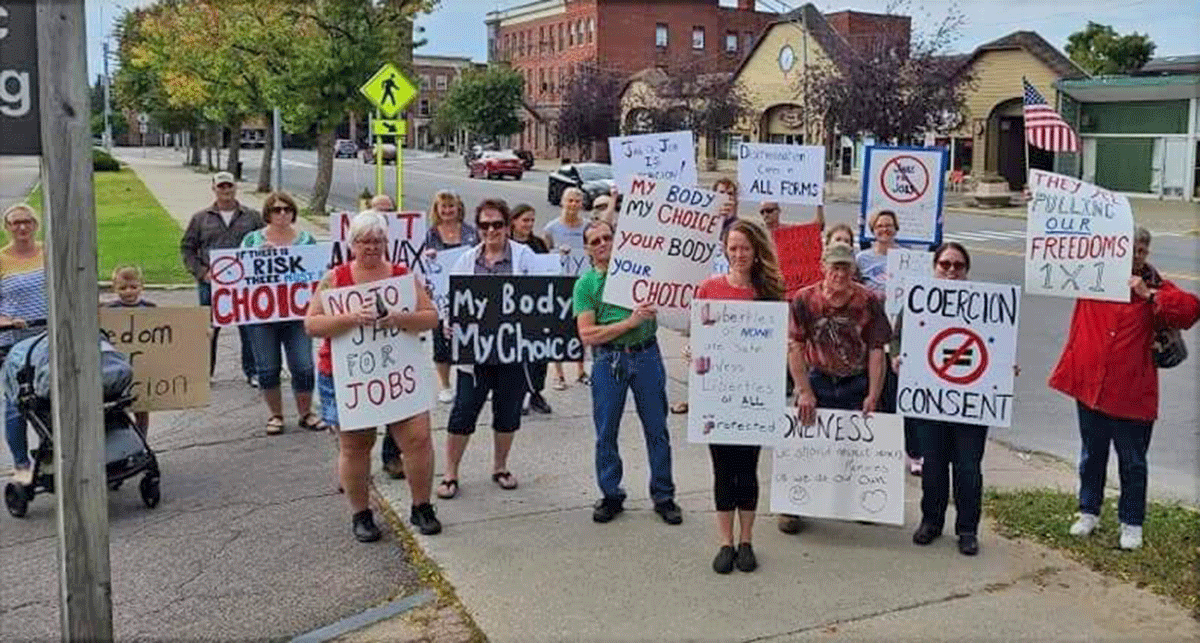 A group of protestors show their signs Sunday while supporting ‘medical freedom’ related to COVID-19 vaccine mandates some employers will require. Photo submitted by Rebecca Blackmer.

POTSDAM — A Colton woman has organized a protest and created a community group to support each other in the fight against state and employer mandated vaccinations.

Most recently President Joe Biden announced plans to mandate vaccinations of employees for all businesses employing more than 100 people.

The protest comes as hospitals here are filling up with COVID-19 cases in the emergency room and high levels of admittance. Cases have been surging in St. Lawrence County, with 106 deaths reported in the county and nine in the latest wave.

“Standing Up for Our Medical Rights” was created by Rebecca Blackmer, to help people, many in the healthcare field, who face termination if they do not receive the COVID-19 vaccine.

By Sept. 27, all healthcare workers at hospitals and long-term care facilities across New York will be required to have gotten at least their first dose of a COVID-19 vaccination. Limited medical exemptions will be allowed.

“I have since learned that other employers are enacting the same policies,” Blackmer said.

The group held its first protest Sunday in Potsdam.

They marched from Ives Park to Canton-Potsdam Hospital on Cottage Street, up Waverly Street and back to the park down Market Street.

“We carried signs, some saying ‘Honk if you Love Freedom’ … we did get many honks in support,” she said. “Many community members cheered, or clapped, or gave us thumbs up.” Other people disagreed, Blackmer said, allegedly hearing some motorists yelling “get the jab” and some vulgarities out their vehicle windows.

“Overall, I consider the march a success and I hope we reached others who perhaps feel as discouraged as we did. I hope we gave them hope that they have support, and we are working to make our voices heard,” she said.

She said attendees at the protest came from all walks of life.

“There were families who have been forced out of school when their religious exemptions were taken away two years ago. Casino employees, healthcare workers, and teachers were there, Blackmer said.

Individuals who have been injured by previous vaccines were there as well, she said.

“At the very beginning of the protest, we shared our stories, some were absolutely heartbreaking … however, it was such a meaningful moment, and an emotional afternoon,” Blackmer said

She said the group supports people getting the vaccine if they choose, but feels forcing a vaccine onto someone as a condition of employment is wrong.

“We share the viewpoint that as human beings, we have an unalienable right of making our own medical decisions, without the risk of losing our employment or education,” she said. She also cited a risk of vaccine injury, and the lack of vaccine liability that is being offered.

There are plans to meet Saturday at Ives Park from 11 a.m. to 1 p.m. to continue the effort of opposition to mandated vaccinations. Their Facebook page is https://www.facebook.com/groups/231076532315915/?ref=share .

A group calling itself Frontline Defense has also announced plans for a rally Wednesday at the Potsdam Post Office at 4:30 p.m.

It is unclear what impact a return to in-person learning in schools, which are already seeing positive COVID-19 cases, will have on the hospital strain at this time, though reports from the board of health say children have only been admitted under rare circumstances at this time.

Across the state, stories are being reported of health care workers walking off the job due to the vaccination mandate, though it’s unclear how much of this has occurred in St. Lawrence County. Recent reports say Lewis County General Hospital was forced to close its maternity ward due to walk offs. Recently a St. Lawrence Health System’s cancer center director announced his resignation.