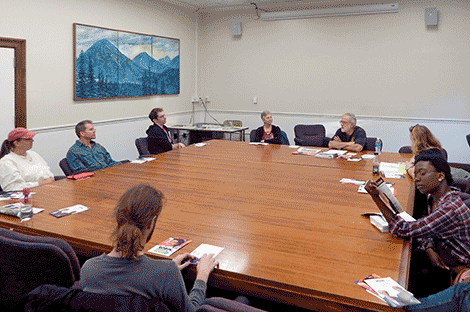 Invited by the International Socialist Organization and hosted by the Potsdam College Socialist Organization, Hawkins explained in great detail his vision laid out in his second campaign for Governor in 2014, where he called for a "Green New Deal," including public jobs for the unemployed, single-payer healthcare, a ban on fracking, and a 100 percent clean-energy future.

Hawkins got involved in politics early in life, “seeing that the concerns of the average worker, minorities, and environmentalists were often overlooked in mainstream politics,” according to the ISO.

“This trend is poignantly expressed in the low voter turnout in the US and the promotion of the two least-favorable presidential candidates (Clinton/Trump) in recent history,” according to a news release from the ISO. “Citing that a Green Party win is not in the immediate future, the strategy of growing a third-party base is key to involving people in democracy from below, building a movement, rather than outsourcing concerns to figureheads that kowtow to corporate money. As neither the Democrats nor the Republicans can break free from their corporate masters, a growing majority of Americans want more political options and better opportunities for third parties.”