POTSDAM -- A former SUNY Potsdam student is accused of raping a woman in the village last December. 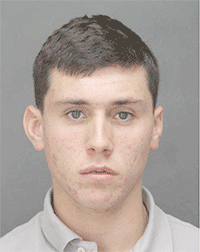 Investigators allege Cunningham raped a then-18-year-old female at a residence in the village on Dec. 3, 2017.

Cunningham was arraigned in Potsdam Town Court. The outcome of the arraignment was not available.