She will seek the seat held by former Judge Jerome Richards, who retired earlier this month. 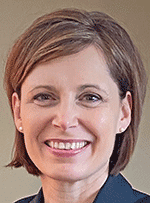 Duvé was St. Lawrence County's DA from 2006 until 2013. She lost the election that year to Mary Rain, who had a troubled tenure that ended in Rain not seeking a second term and being suspended from practicing law in New York state for two years.

Duvé, a Potsdam resident, was appointed Judge Richards' principal law clerk in 2015. Her announcement says she "continued in that role to assist eight other judges assigned from throughout the district to cover the business of County Court pending the November election of a new judge." She served in a similar capacity for Franklin County Court Judge Robert Main Jr. from 1998 to 2005.

She was also twice elected as Potsdam town justice, a position she held from 1998 to 2005.

"While District Attorney, Duvé was cross designated as a Special Assistant United States Attorney for the Northern District of New York, served on the Executive Committee of the state District Attorney’s Association, and participated in the establishment of the Judicial Diversion Program (Drug Court) and Integrated Domestic Violence Court. A member of the Carlisle Law Firm in Ogdensburg from 2014-2015, Duvé handled Social Security Disability claims and personal injury litigation, and accepted appointment as a Special Prosecutor for numerous felony matters in County Court. Duvé’s experience has also included working in the county’s Public Defender’s Office (1991-1996), teaching as an adjunct/guest lecturer at SUNY Potsdam, SUNY Canton and the David Sullivan Law Enforcement Academy on various legal topics, trial tactics and courtroom preparation, and conducting training sessions for local town and village judges," her campaign announcement reads.

“I am keenly aware of the importance of approaching each matter and application before the court with an open mind and making a determination under the law that takes into account the unique circumstances presented. There is no better way to serve the people of St. Lawrence County than by instilling confidence that each person before the court will be heard, and assuring the fair and equal administration of justice for everyone," Duvé said in a prepared statement.

“I have had the enormous privilege of serving the people in our county for nearly three decades. At no time more than the present, have the changes and challenges in the criminal justice system been so rapid and so extensive. If given the opportunity, I will bring my many years of experience as a litigator, town judge, court attorney and law clerk to the position of County Court Judge to serve the people of St. Lawrence County fairly and impartially, with the dedication and commitment to justice deserved by all.”