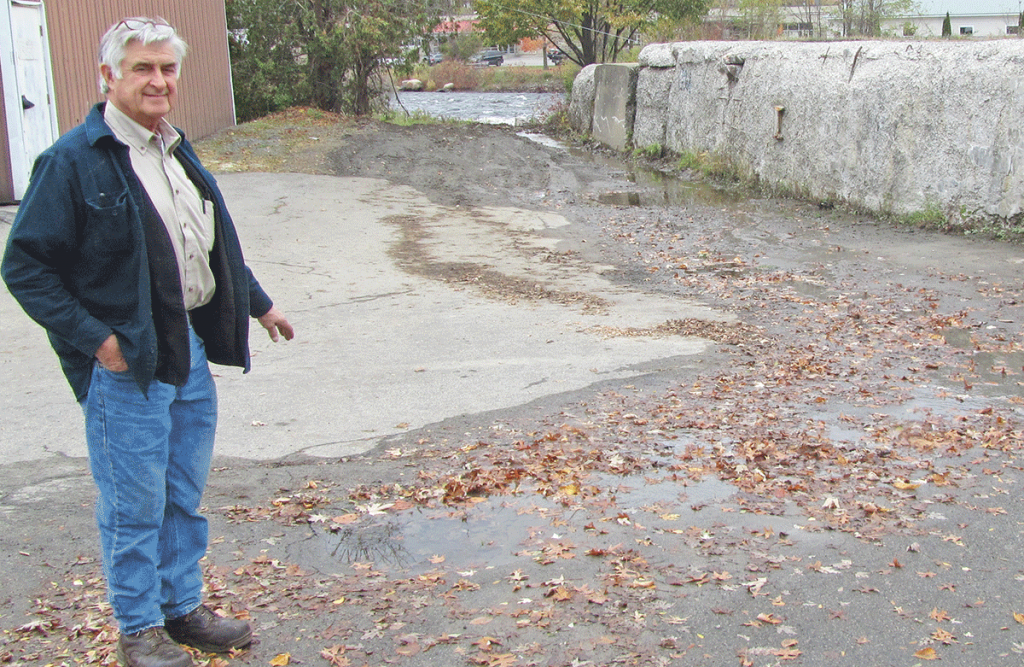 John White of Evans and White Ace Hardware points to spot in the store parking lot where water has been coming up, he thinks from undermining at the flood wall.

POTSDAM -- Deterioration of a retaining wall on Fall Island at the west end of the eastern Raquette River dam “poses a significant flooding risk” unless it is restored.

That’s the opinion of engineers at Environmental Design and Research, a consulting firm that is “starting the process of how to assess the wall,” says EDR engineer Mike Tamblin.

Tamblin told village trustees at their meeting Oct. 21 that the firm is planning non-destructive testing to see what will need to be done to shore up the flood wall.

The testing, Tamblin said, will be like an x-ray to look at “multiple internal layers of sandstone and concrete.”

How significant are the risks?

“It’s hard to tell,” without more information. He was reluctant to be specific before the firm begins their “analysis of what’s at risk,” but that part of their examination will begin with “an analysis of where the low areas” behind the wall are.

He said there are some spots where the village had done repairs, but the extent of the degradation is unknown until the tests are done.

“Once we get the test results back we can come back to the village with an evaluation of the risk.”

Tamblin says they are in the process of getting quotes from specialists in this kind of work, and then will report back to the village board for approval of the testing.

He estimates the testing itself could be done as soon as January or February. With a report on that in hand, EDR will return to the board with recommendations, a cost estimate for repairs, and a survey of possible funding sources for the work.

The wall, roughly five feet high, 50 feet long, and three feet wide, runs alongside the parking lot behind Evans and White Ace Hardware on Fall Island and the village’s eastern Raquette River dam. It keeps the water in its course as it rises before flowing over the dam.

But it is visibly degraded, with concrete flaking off and chunks falling away, revealing an interior of stacked sandstone slabs and exposed rebar.

It is in much rougher shape than it was when we saw it in the spring of 2011, when communities up and down the Raquette suffered flooding due to high water. But the wall held, preventing flooding there.

In February 2016, the village Board of Trustees received a draft engineering report aimed at reassuring the Federal Energy Regulatory Commission (FERC) that the wall was is in good enough shape to keep its “low hazard” designation.

H.L Turner Group of Concord, N.H., a firm experienced with hydropower dams, submitted the draft report in response to a FERC request for an analysis of the stability of the flood wall.

FERC had made its concern about possible failure of the wall known a few months before and had suggested that the classification of that dam be changed from a low-hazard installation to one with significant damage, said then-Village Administrator Everett Basford. FERC also wanted a detailed emergency plan in place for the chance that the wall would fail.

But the draft Turner report said that their “complete analysis concludes the wall is stable and they believe the dam should be classified as a low-hazard dam,” Basford said.

Turner did recommend that the wall be recapped to repair wear and tear on the concrete and cover exposed rebar on the top of the wall.

The village was financially strapped at the time and if there was any follow-up then, it is not apparent.