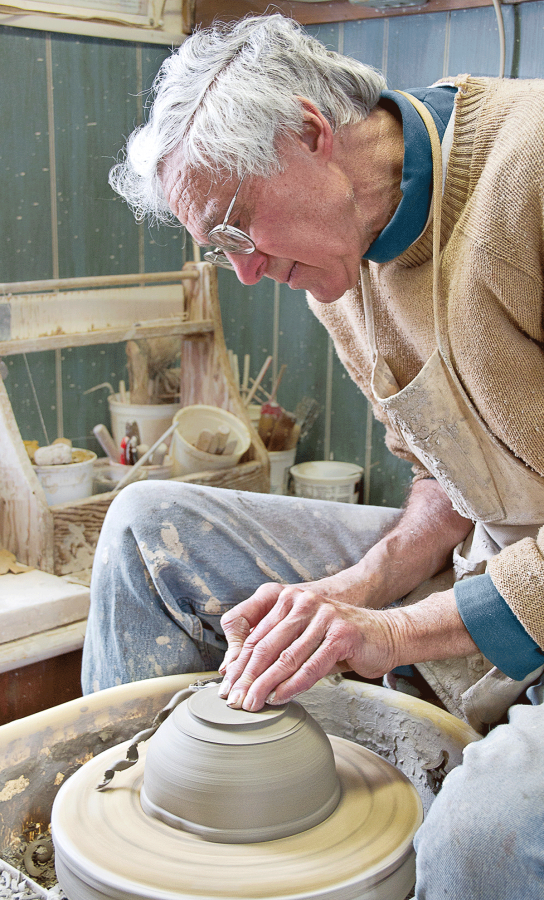 Ron Larsen of Crary Mills Pottery in his shop at 174 County Route 35. Larson is ceasing regular production of pottery after 42 years in the business. Photo by Jim Bullard.

CRARY MILLS – Local potter Ron Larsen of Crary Mills Pottery, a long-time fixture and organizer in the St. Lawrence County arts community, will no longer regularly make pots and wares at his shop at 174 County Route 35.

Larsen said 42 years of pot making and many thousands of pots have taken their toll physically. Enough so that a decision has been made to cease regular, consistent production of wares from Crary Mills Pottery.

The pottery itself is not closing, and the showroom, offering pots and nature photography for sale, remains open and functioning. But new production of pots will be sporadic and episodic at best, Larsen reports.

To mark this milestone in the life of Crary Mills Pottery, and as a modest “thank you” to all those who have acquired a pot from the pottery over the last 40 years, there will be a special “end of production” sale at the pottery from Dec. 7-14, from 11 a.m.-4 p.m. daily, with all pots at wholesale prices, Larsen said.

Ron and and his wife Joan Larsen, a former university mathematics professor and a newly minted reference librarian, respectively, relocated to the North Country in the summer of 1977, settling into the historic 1835 house of Edward Crary in Crary Mills.

Joan was about to embark on a successful and rewarding 34-year career at St. Lawrence University. Ron, after a year of teaching at Clarkson University, turned his attention to converting his avocational interest in pottery to the establishment and development of Crary Mills Pottery.

Gradually the pottery became a fixture in the North Country, offering the local population a constant supply of fine utilitarian stoneware pottery.

In addition, Ron developed a widespread wholesale market for his work supplying stores and galleries nationwide. Although concentrated primarily in the Northeast and mid-Atlantic region, this market, at times, spread as far afield as Alaska, Hawaii and the west coast.

Together with the activity of running a pottery, Larsen has, over the years, been involved in other aspects of the craft world. He has participated in numerous exhibitions, and written essays for various publications such as Ceramics Monthly, The Studio Potter and, the short lived, Professional Craft Journal.

He has also compiled and edited an anthology of essays, commentaries, stories and poems concerning functional pottery and pottery making entitled “A Potter’s Companion: Imagination, Originality and Craft.” This was published by Park Street Press of Rochester, VT and received the 1993 Vermont Publisher’s Special Merit Award in the Arts.

Larsen has been involved with the St. Lawrence County Arts Council since its inception and served for a few years on the board of directors. Together with Kristin Boyesen and Anne Burnham, he was a co-founder of the current Arts Council Studio Tour, now in its 32nd year.

More recently, Larsen has explored nature photography, primarily with images of the Adirondacks and North Country. A sampling of this work is on display and for sale at the pottery showroom together with a wide range of his pottery.

Crary Mills Pottery is located at the intersection of County Route 35 and the Post Road at the flashing light in downtown Crary Mills. Call 315-386-4721 for additional information.