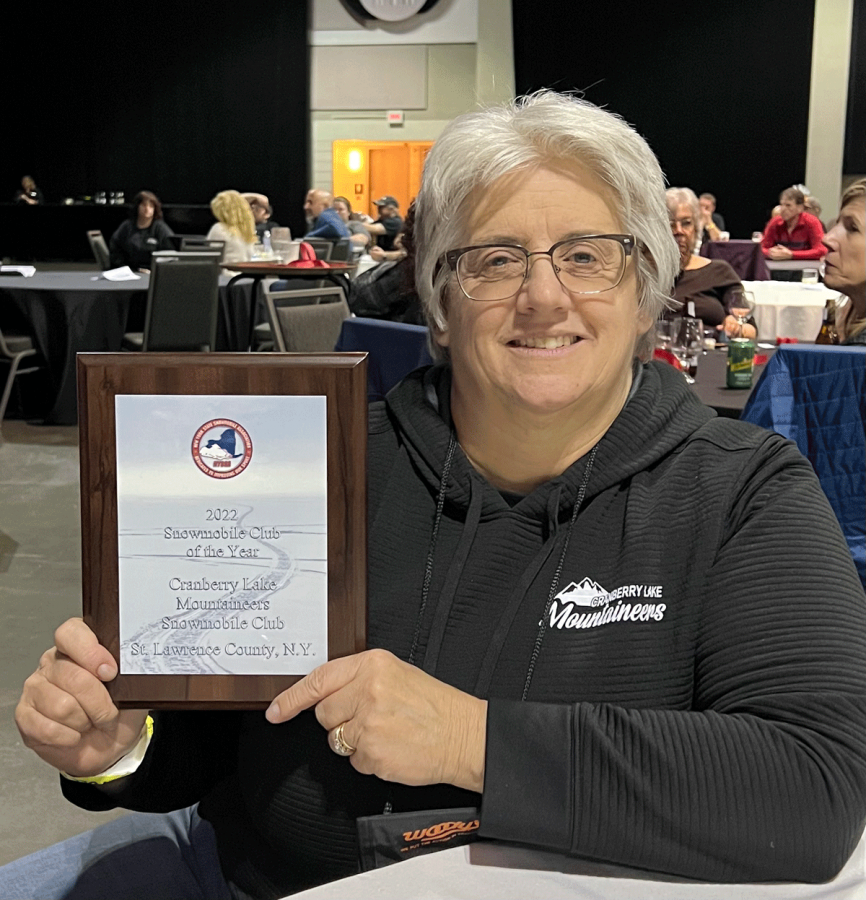 “With 225 snowmobile clubs in New York, receiving this award is truly an honor. It speaks volumes of the hard work and dedication of our volunteers, and 448 members committed to maintain the nearly 150 miles of snowmobile trails they are responsible for," said Club President Heather Wilson.

She credited the dedication of their volunteers as the reason the club was honored.

In addition to their volunteers, Wilson wished to thank landowners, sponsors, and donors. The snowmobile trails the Mountaineers maintain are located in southern St. Lawrence County in the towns of Clifton and Fine, and some trails in the towns of Clare and Colton.

This past season, their volunteers logged over 455 hours grooming and 1,900 hours of trail work.

In December, with the help of donations, the club added two trailside rest areas to make the sport of snowmobiling more family friendly. One rest area is located on NYS Corridor trail C8 at JCT 29A in the Town of Clifton, and the other on C7A between JCT 54 and 55 on the Roaring Brook Club in the Town of Colton.

Both rest areas have a warming hut and an outhouse. The Roaring Brook rest stop is heated, and has a picnic table and propane grill. This area is approximately 4 miles southeast of iconic “Little Blue”, a beautiful scenic overlook that should be on everyone’s bucket list.

The Mountaineers had a vision that trail funding, earned entirely from snowmobile registration, should stay on the trails that generate the funding. The Club dreamed it, planned it, and are now making it happen.

A year ago, the club didn’t own a single trail groomer. Today, they own three older groomers. Their present inventory includes a 1995 and a 1997 John Deere with tracks, and a 2008 PistenBully.

To reduce the risk of a breakdown, the Club is focusing its ongoing fundraising efforts to upgrade the aging fleet. In December 2021, the Club was awarded a Recreational Trail Program (RTP) with the Club required to fund $60,000. The RTP grant also stipulates that the equipment be made in the USA with American steel.

“We have our fingers crossed that their new groomer will arrive before next season,” President Wilson said.

They also hope to upgrade their 1995 Star Lake groomer. Because of the New York State Constitution’s “Forever Wild Clause”, C8 from Herkimer County to Wanakena requires a groomer to be 8’ or less wide and not over 10,000 lbs.

To learn more or to help them to continue to improve trails, visit the Cranberry Lake Mountaineers Facebook page.