Composting program in play at Canton-Potsdam and Massena hospitals 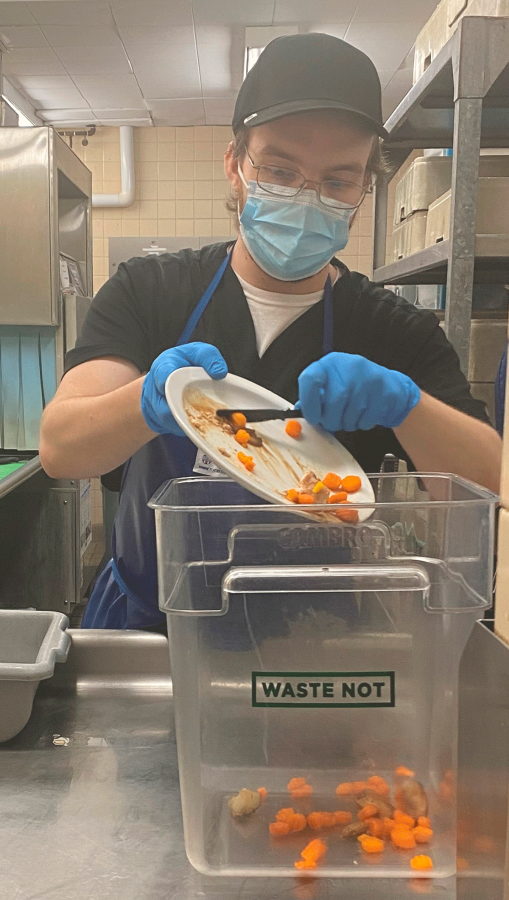 Canton-Potsdam Hospital Food Service Worker Trevor Boprey scrapes patient food leftovers into a compost bin, which will later be dumped into a larger container and hauled away for composting at Whitten Farm. Photo Submitted by St. Lawrence Health.

What started out as a program for one of St. Lawrence Health’s (SLH) hospitals to become engaged in a community initiative, quickly turned into involvement from a second hospital, and its third hospital will not be far behind.

Food waste that previously ended up in the hospitals’ trash or down the garbage disposal is now being deposited into bins provided and picked up by Whitten Farm. Whitten’s currently picks up the waste two to three times a week, based on the location. As bins are picked up, clean ones are delivered to replace them.

“There are many reasons to compost. Repurposing food waste versus adding to landfills or water systems is more sustainable for our environment and decreases greenhouse gas. SLH is one of the largest food service operations within St. Lawrence County and by composting, we are doing our part and setting a tone for sustainability,” Prentice said.

“Composting is one way to show our commitment to our local communities, and in addition, supporting a local business,” Prentice added.

The project has been ongoing for approximately two months and hospital dietary staff are more aware and mindful about production waste and overproduction waste. They have been coming up with ways to use extra ingredients, improve production skills, and learn about the potential cost savings.

“Seeing the creativity grow among our teams has increased employee engagement. Our next step is focusing on reducing the overall waste and cost saving initiatives,” Prentice said.

​Currently, the dietary staff is focusing on patient services, production waste, and over production waste. The following phase will be to include café customers in the composting process.

Prentice is currently reviewing a safe and efficient way to transport Gouverneur Hospital’s food waste to one of two possible locations. While efforts are being made to determine how Gouverneur will participate, all three SLH hospitals will continue with the Waste Not program from Morrison Healthcare. Waste Not is used in addition to the composting initiative and provides a better sense of the cost/potential cost savings.