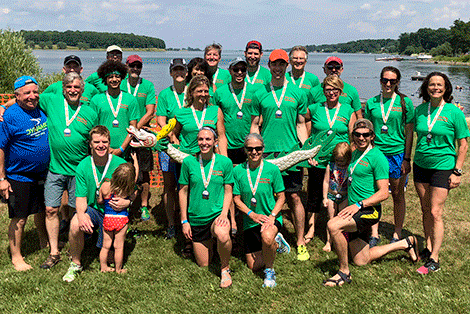 OGDENSBURG -- For the third year in a row, the Kelly Farm team took gold in the Claxton-Hepburn Medical Center Dragon Boat Challenge.

Dynamic Dragon Boat Racing of Knoxville, Tenn., provided the specialized boats and the expertise to put on a successful race.

“The day was all about relationship building and having some fun in the North Country sun. A dragon boat team consists of 20 paddlers and a drummer, all working together to propel the 46-foot long war canoe down the course,” according to a news release from CHMC.

Teams included representatives from many area healthcare institutions including Canton-Potsdam Hospital, Gouverneur Hospital, St. Lawrence Surgery, corporate and community-based teams as well as four teams from Claxton-Hepburn. The event drew over 900 people to Waddington Beach. Local vendors provided food for the crowd and many of the teams traveling stayed in local hotels and campgrounds helping to generate revenue for the community.

The 2019 St. Lawrence River Dragon Boat Challenge is scheduled for July 13. New for next year’s event will be addition of 10-paddler boats, which will require a smaller team.