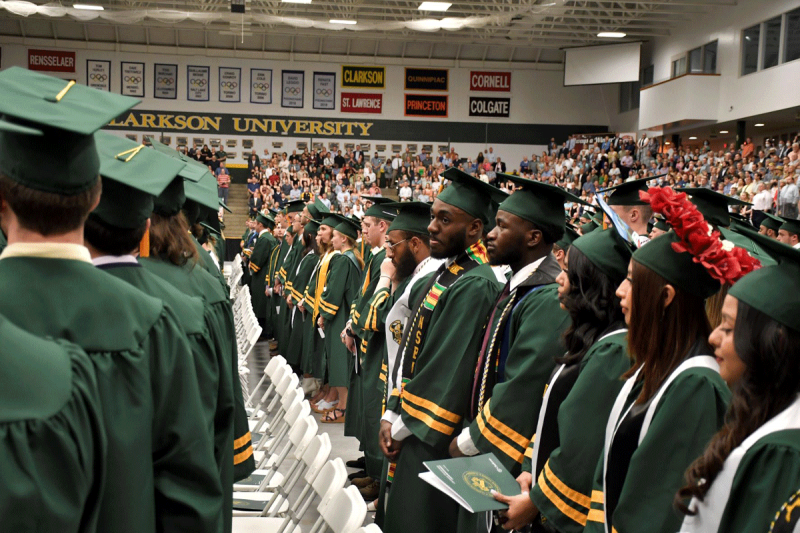 An additional 189 students received degrees this past winter and summer, university officials said.

Tom Langen, a professor of biology in Clarkson University's School of Arts & Sciences, was awarded the Distinguished Teaching Award. The $1,500 prize is given "in recognition of the importance of superior teaching." Candidates are nominated for the award by Clarkson alumni and the final selection is made by a faculty committee.

Senior Kristen A. Goebel of Victor, was awarded the Levinus Clarkson Award, and senior Autumn Hui Lennon of Beacon, N.Y., received the Frederica Clarkson Award. Both are $1,000 prizes given to "a student who demonstrates the best combination of scholarship and promise of outstanding professional achievement."

In addition to the graduating students, receiving honorary doctor of science degrees and addressing students, families and guests were Dr. France A. Córdova, president of the Science Philanthropy Alliance and former director of the National Science Foundation, Sveinung Løset, professor of arctic marine technology at the Norwegian University of Science and Technology (NTNU) in Trondheim, Norway, Dr. Toby Cosgrove, M.D., former CEO and current executive advisor of Cleveland Clinic, and, Dr. Mae C. Jemison, the first woman of color in space, leader of the 100-Year Starship organization, and founder and president of the Jemison Group and BioSentient Corp.

Cordova gave the graduates three quick pieces of advice; “connect with your passion, your instincts. Happiness in what you do in both your professional and personal life is more important than money. “Connect the dots. The most brilliant accomplishments are wonderful surprises, resulting from putting together different ideas in entirely new ways. And, connect with others. Care about others and give back in your unique way. We’re here for just a short time, make your time one of impact.”

Løset told the students to, “be great and accept that you may not always reach your goals but you have done your very best and used your abilities. Be proud of yourself, you have succeeded in character.”

Cosgrove spoke about failure and told the graduates that, “by this time, most of you should have sampled a little failure. For those who have not, be patient. It is coming. Failure is a great teacher. The only true failure comes when you fail to rise and try again. Only those who dare to fail greatly can ever achieve greatly,” Cosgrove said. “It is how you handle your failures that will define and determine your success. Dream a grand dream; relentlessly pursue your dream, and do not fear failure.”

And Jemison spoke about nature and the changing world that the graduates are heading out into. “Graduation is a time of transition, it is moving from one definable phase of your life to the next, and taking your place in a greater world. But right now, the world that you are entering is undergoing not just subtle changes, but upheaval and instabilities, that may have immutable, lasting changes and consequences for untold decades to come.”

In closing, Jemison told the graduates that when things get rough, they should go outside and look up. “Just go outside sometimes and look up at the clouds and stars and allow yourself to wonder what they were, just as you did when you were a child. Look up at the stars and wonder how we’re connected to the universe.”