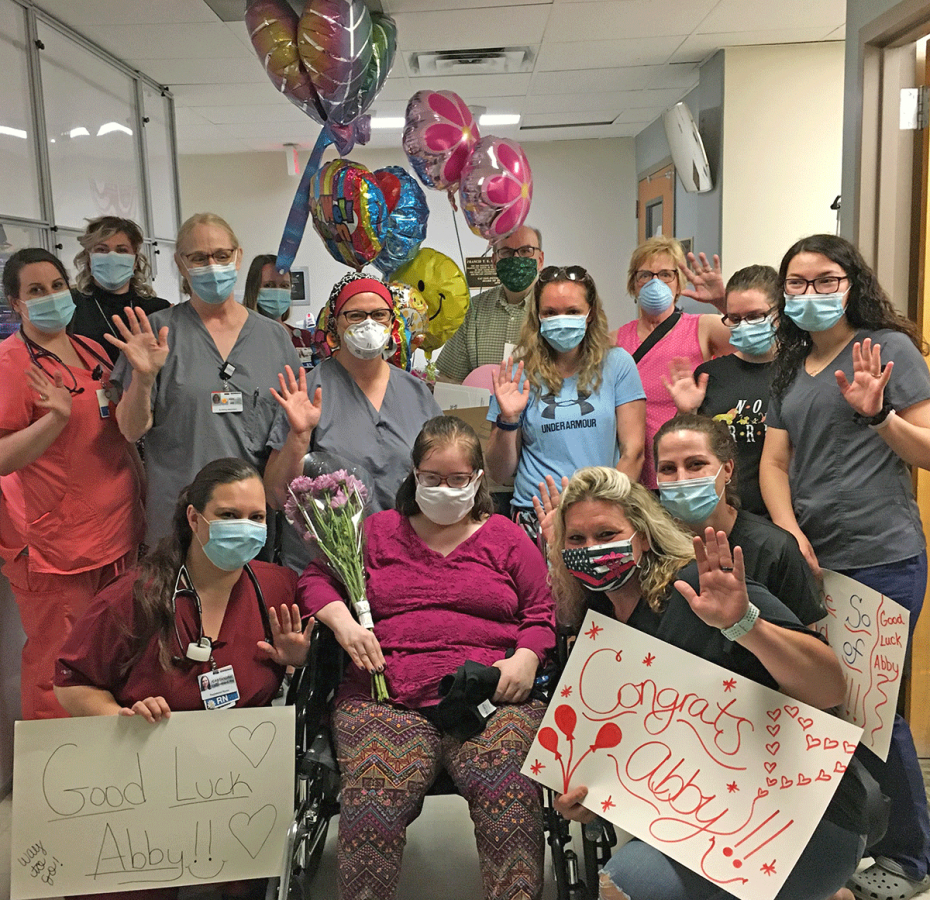 POTSDAM – As a 23-year-old woman was recently released from Canton-Potsdam Hospital (CPH), the hallway to her exit was lined with staff members cheering her on, saying good-bye, and wishing her well. There were signs, applause, and some tears from those who cared for her over the past 49 days.

Abigail “Abby” Darou of Canton was not a typical patient. She is a young woman who “captured the heart of everyone in this St. Lawrence Health System hospital,” hospital officials said.

Abby is the daughter of Mark and Deborah Darou, and is a Down syndrome special needs individual, which makes her comeback from COVID-19 nothing short of amazing.

“The week after Easter, April 17 actually, Abby started having coughing spells with a very deep cough. Then she started having pain in her right side, which we didn’t know if it was just from the coughing, or something else,” Mark Darou said.

Deborah Darou took her daughter to the doctor’s, a CT scan was scheduled, and it was discovered that Abby had double pneumonia. She was admitted to CPH, and taken to the Critical Care Unit/Airborne Precaution Unit, where her mother rarely left her side. Mrs. Darou took ill during these first few days, and after being tested, it was discovered both mother and daughter were COVID-positive.

“My wife was in the hospital for one-and-a-half weeks recovering,” Mark Darou said. While Abby and Deborah Darou were in the hospital, Mark Darou discovered he was also COVID-positive, along with his mother-in-law, who lives with his family. Abby’s sister, Olivia Sullivan, was also diagnosed as positive. Mr. Darou and Mrs. Sullivan were the two among the five family members who did not require hospitalization. As the family recovered, Abby continued with treatments, and had since been intubated to assist with her breathing.”

“She had four doses of tocilizumab, and the average is one or two,” Mark Darou said. “She overcame the virus, but her body was over-attacking the virus, and she had inflammation throughout her entire body. At one point her temperature was up to 107 degrees. They used a cooling blanket on her and other cooling measures to get her fever down.”

“They were able to receive a plasma donation from the Mayo Clinic,” Mark Darou said of the CPH staff. “It was a perfect match for Abby. She received it over a two-hour period and started responding well.”

Throughout those 49 agonizing days, Mr. and Mrs. Darou were in constant contact with the members of Abby’s healthcare team at the hospital, and he noted their elder daughter was a huge help through it all.

“Olivia was phenomenal. She picked up on the medical terms and language, had great questions my wife and I didn’t think of, and was our family statistician. She was unbelievable,” Mark Darou said of Abby’s sister.

“We are so appreciative to all of them, and for always taking the time to answer our questions – no matter how long it took. We gave no consideration at any time to the thought that we would want to move her somewhere else,” Mr. Darou said. “Dr. Atkinson called her a miracle. He said anything that could have happened to Abby, did. She is so amazing and strong.”

Dr. Soule pointed out the care Abby received was a joint effort of the entire inpatient COVID team. “We all spent a tremendous amount of time on Abby’s case. Eyal Kedar, MD; Kylie Broughal, PA-C; and Sara Mohaddes, PA-C, are among the list of providers who helped Abby get through this,” he said.

On the warm and sunny afternoon during the first week of June when Abby was finally released from the hospital, she said she was “excited” to go home, was looking forward to hugging her cat Jewel, and enjoying her favorite pastime of going through cookbooks.

Even behind their masks, smiles were evident on the faces of all the CPH staff members as they said goodbye to Abby. They lined the hallway while one of her favorite songs, Chicken Dance Song, played from a cell phone, and they cheered and clapped for her. Abby was given a bouquet of flowers, balloons, and a COVID Survivor t-shirt created by one of the doctors.

Leading up to this day, Abby’s shy smile, trusting nature, and lovable spirit captured the heart and attention of those on the entire second floor of the hospital, officials said. Renee Dashnaw, RN, noted she was thrilled to be Abby’s nurse on this final day of her hospital stay.

“She is a true miracle. It is an absolute honor and privilege to assist this little lady out the door,” Dashnaw said.

Kelsea Longley, RN, was part of Abby’s team beginning the day after she was admitted, and stated this is a huge day and big step for her patient.

“She was shy and scared at the beginning, and of course we were all wearing our PPE which can be scary looking,” Ms. Longley said of their personal protective equipment. “But she became more comfortable with us. We knew Abby loves the Chicken Dance Song, so some days we would stand outside her window and do the dance for her.”

During Abby’s early days in the Airborne Precaution Unit/Critical Care Unit, Sarah Close, RN, was also among her health team.

“She was intubated for 24 days, and I was with her for four weeks straight. She is amazing, and such a tough person,” Close said. “Here we have a young woman with special needs who has been without her usual support people. We would call her mom and dad so she could hear them. I was working on Mother’s Day and I made sure her mom was able to talk to her.”

You Are My Sunshine is another of Abby’s favorite songs, and her family got together, recorded themselves singing it for her, and sent it to Close. The nurse put the phone in a biohazard bag and played it for Abby on numerous occasions.

“Her family are all rocks. They never wavered in their support and belief she would recover. Abby doesn’t know what it is to not be strong, or to say she’s giving up. Without her strength, we would not have the same outcome,” Close said. “We took care of her, but she did all the hard work.”