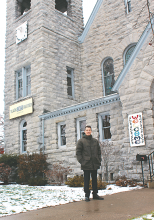 The Rev. James Galasinski stands in front of the Unitarian Universalist Church of Canton.

CANTON -- While many religious organizations tend to steer around direct political or social justice work, one church in Canton holds to activism as a core belief.

Known for hanging a “Black Lives Matter” sign on the church tower and promoting causes like gay rights, the Unitarian Universalist Church of Canton plans to hire a part-time social justice coordinator who will spearhead some of its programs and initiatives.

The Rev. James Galasinski, the Canton UU pastor, said the position would require about 10 hours a week. Details and a formal job description are still being formulated, he said.

The Canton pastor has been vocal regarding LGBTQ issues, lately writing letters to the editor questioning the evangelical Christian Fellowship Center’s stance of LGBTQ people and their position on gay marriage rights. The CFC is attempting to set up a church in Canton’s business district.

“It’s a faith position to side with the most vulnerable populations in our society,” Galasinski said.

Galasinski said the LGBTQ community is openly embraced in the UU church. “They are not ‘other’ here in this congregation.”

The reality is that some social justice problems are big, like equal rights for all and environmental problems, he said. “(But) we are not shying away from contemporary issues.”

food pantries, and offers its Shared Offerings to local and national organizations doing justice work that are nominated by church members. The church also plans outreach efforts to the local prison population next fall.

Social justice could be one of the reasons the Unitarian Universalist Church, one of the oldest in the area, seems to be thriving with a fairly stable congregation of 200 in a community known for its progressive politics.

“There is definitely a trend where people are not being as religious as they used to be,” he said.

“But we’re not dropping like mainline churches,” Galasinski said. A recent survey in the publication UU World shows a slight increase in membership for UU churches worldwide, and Canton has experienced a similar boost.

Since Donald Trump won the Electoral College vote and was chosen as president there has been a “Trump Bump,” Galasinski said.

A local CFC pastor who was interviewed by North Country This Week recently speculated that the decline in mainline church membership nationwide might be partially related to an embrace of liberalism in the 1990s. Galasinski has a different perspective. “I would argue they didn’t become liberal enough.”

“People are seeking out community, refuge and comfort in these troubling and weary times,” he said.

Everyone from yogis, construction workers, nature lovers, hippies, college professors, professionals, students, farmers and counterculturists of all shapes, sizes, colors and ethnicities will be found attending Sunday services at the UU church.

“To be honest, everyone has an in and out group. I like to think we are conscious of that,” he said. “We don’t have a creed. We have people who are theologically outside of the box. They maybe can’t fit in anywhere else.”

People tend to think of Christianity as having a conservative element to it, Galasinski said. “So religion tends not to change much.”

“We (UU members) believe in change. Life is an unfolding process.”

“We’re in an odd spot. We are a progressive religion, but ‘religion is conservative,’” Galasinski said. “We’re not evangelical. We are not into converting people.”

“We embrace science, we embrace new discoveries and we are willing to adopt those things. For instance we are one of the first organizations to embrace evolution,” the pastor said.

Unitarian Universalism holds with being hospitable, caring for the environment, the concept of entanglement, and that its neighbors are the global community, all part of the church’s belief principals.

Galasinski points out that he himself is not a fundamentalist, but he has studied various Christian denominations, Hindu religion, Jewish faith and Buddhism.

“These (under Unitarian Universalism) are all acceptable paths to travel.”

Raised conservative Lutheran in the Midwest, the Canton pastor was also involved in charismatic and evangelical churches including mega churches, Pentecostal and revival style congregations, even playing bass in a charismatic church band at one time. He attended a Catholic liberal arts college where he began taking classes focused on contemporary theological scholars.

“There is this open minded, progressive way of looking at religion,” the reverend said of modern theology.

Inspired by the poetry of Mary Oliver, someone suggested he check out a Unitarian Universalist church.

“My brain lit up. The Lutheran thing and the other churches I tried weren’t where I was,” he said, adding that Unitarian Universalism made the most sense for him.

He studied Biblical criticism and the works of Theodore Parker, Emerson and other modern theologians, and obtained his master’s degree in divinity and subsequent ordination as a UU reverend.

“We aren’t perfect, but our faith is bigger than the four walls of this church,” he said. “I think every church wants that, but we really mean that on a practical level.”

UU practice tends to focus less on salvation in the afterlife and more on the here and now, the pastor said.

“Salvation in this life is important. How can we help each other to lead more meaningful lives?” Galasinski said.

“Our job is to love the hell out of this world.”

The trend nationally is that healthy Unitarian Universalist churches are usually located in metropolitan areas, near universities. The Canton church is a “small miracle” Galasinski said. He often finds himself reminding colleagues of the church’s local history and connection to St. Lawrence University.

Galasinski said that at one time New York State was a breeding ground for the early UU movement, with a church in almost every small town. The Potsdam Museum was once a UU church.

Unitarian and Universalism were joined into one movement in 1961. Both had a long history of religious debate and social justice work leading back to the Middle Ages, with members who have been abolitionists and women’s suffragists and scholars including poet and writer Ralph Waldo Emerson.

The UU movement has been more widespread throughout U.S. history than most people might realize.

There have been four Unitarian U.S. presidents, five if you count Jefferson who was theologically Unitarian but was not an official church-going member, said Galasinski.

One of the first, if not the first fully ordained (by their whole denomination) clergywoman was the Rev. Olympian Brown, a Universalist, the Canton pastor said. She graduated from the St. Lawrence Theological School and was ordained in 1863 in Malone. Brown preached in Universalist churches throughout the North Country including Canton, Galasinski said.

“Nationally, we have more female identifying clergy than male, not to mention more and more people who identify as transgender and queer,” he said.