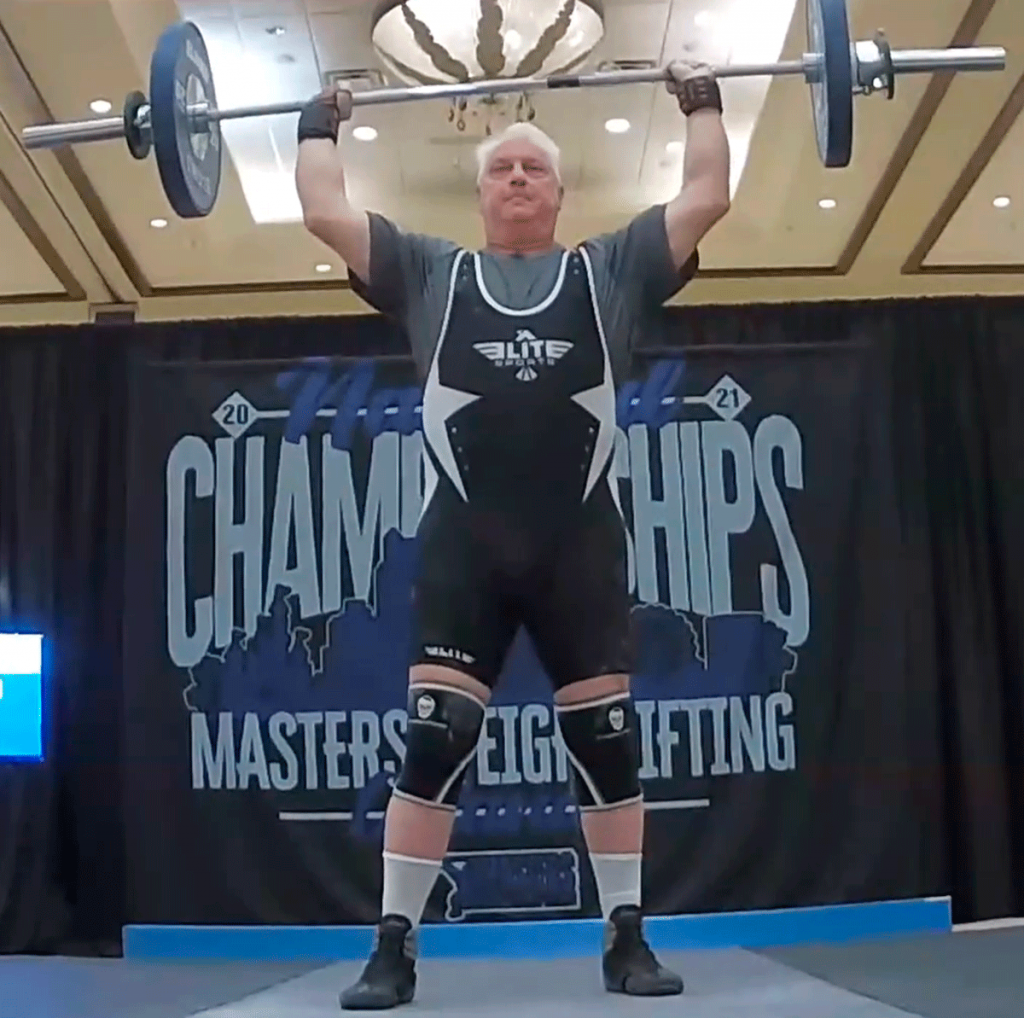 Jim Randall, a 1973 Canton High School graduate, who now resides in North Carolina, has built an impressive resume in the sport of weightlifting, most recently winning the gold medal at the 2021 World Masters Weightlifting Championships in May for the US Masters Olympic Weightlifting team. Submitted Photo.

A former Canton resident and two-time Canton Bears All-Northern football player has turned his love of sports to weightlifting where today he has become one of the premiere divisional weightlifters in the world.

Jim Randall, 67, now resides in a small, country setting in Lewisville, N.C. with his wife Jan, a former nursing director of hospitals at Duke University. He said he trains daily in an open outdoors barn he prepped on his property, from the comforts of home, in the heat, the cold, the rain and snow.

Randall said after 18 months of struggling to learn how to combine form and strength, he competed against the best Masters Olympic athletes in the world and brought home the gold medal at the 2021 World Masters Weightlifting Championships held in May for the U.S. Masters Olympic Weightlifting team.

“I had a goal in mind when I began to compete in Olympic weightlifting, to win,” said the 1973 Canton High School graduate.

Randall, a first-year USA lifter, won the gold medal with a personal snatch record of 81KG.

“I was expected to be competitive since I had won triple gold at the Pan Am championships in October 2020 and there were a host of countries in that competition. I am overwhelmed to be given the world title by the Lord,” the ordained pastor remarked.

Randall noted that his weightlifting accomplishments were realized despite suffering disastrous injuries in late 2016 to his right arm and both shoulders, suffering a severed right bicep, long head tendon, rotator cuff and removal of his protective labrum tissue in his shoulder.

“After getting back to normal, I remember asking my surgeon if there was any type of sport or athletic event I could try. He wasn’t hopeful but indicated some very light weights and cardio would be great if you can, and that’s all the hope I needed,” said Randall.

“What’s so amazing about all this is that Jim had only been training for a little over 18 months. I always knew Jim was a strong person, but to see him come back from such debilitating injuries and win it all is simply amazing,” she said. “He is blessed with a strong will that his coach calls ‘that Olympic fiber in his body.’”

“Staying healthy and depending on the Lord is my game plan,” said Randall, who has qualified for the Olympic Masters Games in Kansai, Japan in 2022. “To enter the Olympic stadium with the most talented athletes in the world is a dream well beyond what I could have imagined.”