CANTON — A Canton man was jailed on $5,000 bail after allegedly robbing a liquor store of $65 at knifepoint on Monday evening, according to Canton police. 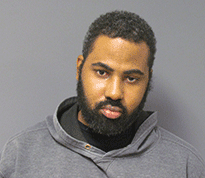 Police were notified around 7:24 p.m. that a clerk at Riverside Liquors, 33 Riverside Dr., had just been robbed at knifepoint.

Udechukwa approached the clerk and demanded cash from the register, officers sad.

The clerk complied and the suspect fled on foot with the cash and headed north, police said.

Police recovered the knife and $65 from the suspect without further incident.