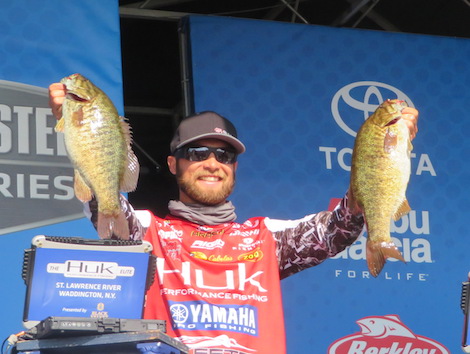 WADDINGTON -- As the bass in the St. Lawrence River get bigger and bigger, so does Waddington’s reputation as one of the best smallmouth bass fisheries in the country.

Announced Saturday, Waddington will become a regular stop on the tour for the next three years. It is scheduled next year from August 15-18.

Many of the 107 professional anglers at the Bassmaster Elite Tournament that started Thursday praised the fishing on the St. Lawrence River and the hospitality in the area. They came from around the country, and as far away as Japan.

“This is my favorite place in the whole world to fish,” said Brandon Palaniuk, of Idaho, during Thursday’s weigh-in onstage. Palaniuk was Waddington’s champion angler in 2013.

“Are there any realtors here? I want to live here,” asked New Jersey resident Mike Iaconellia, as he held up his catch in front of hundreds watching in the audience.

Records were shattered on Thursday, the first of four days of the tournament. Matt Lee, of Alabama, pulled in a record setting total of 27 pounds 12 ounces for his five bass catch. “Every time I hooked a fish, it was huge,” he said.

“Holy moly. I can’t believe that just happened. This is the biggest smallmouth bag I’ve ever weighed, and the biggest single smallmouth I’ve ever caught” said David Walker, Tennessee, with a 72 pound 5 ounce bag after three days. He is in first place going into Sunday’s final. Walker said, “I don’t know what you’ve done to these fish while we’ve been gone, but God they’ve gotten big.”

“I’ve been coming to St. Lawrence River since 1987. I’ve fished a lot of Bassmaster tournaments. I have had a few wins here. It’s a really special place. It just keeps on getting better. It’s never been better than what it is right now. We’ve got Waddington in the schedule for the next couple of years, and it is going to be the highlight of the season for years to come.,” said Kevin VanDam, last year's winner at Waddington.  "We love the support up here.  There's nothing better than the sweet corn here."

The four-day tournament at Whittaker Park at State Rt. 37 starts at 9 a.m. and ends Sunday. Competition weigh-in is at 3 p.m. The winner on Sunday takes home $100,000.

The agreement for the tournament to return to Waddington for the next three years was signed by Waddington Mayor Janet Cassada, according to announcement posted Saturday on the Bassmaster Elite Tournament website. Under the agreement, Waddington will host regular season Elite Series events through 2021.

“We are thrilled to be returning to Waddington for the next few years,” said B.A.S.S. CEO Bruce Akin.

“Waddington ranks as the most popular venue in Elite Series history, drawing more than 34,000 bass fishing fans when we visited there in 2013. The St. Lawrence River valley is home to some of the most passionate fans of our sport, and the Village of Waddington goes all out to draw them to our events in the community.”