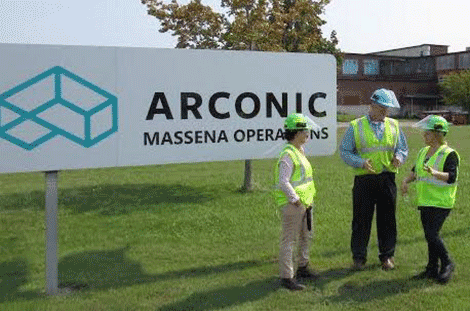 The assemblywoman met with Plant Manager Steve Rombough and Human Resources Manager Eowyn Hewey and learned about the facility’s focus on delivering results and increasing the site’s competitiveness.

She also walked through the extrusions and fabricating facilities and had a chance to see some of the products being shipped out of Massena.

Jenne noted it was her first tour of the plant since Alcoa and Arconic split into two separate companies.

"I've met with Arconic officials in Massena and Albany over the past several months, but this was my first time in the plant since Alcoa split into two companies," she said.

"It's always impressive to see and learn about the work that is being done in the Massena plant. I found it very valuable to have an opportunity to see first hand the products Arconic is making at the Massena Operations and to gain a better understanding of the process," she noted.

Jenne said she was impressed by the strides Massena Operations has taken to remain competitive in the global marketplace.

"It's clear local leadership has risen to challenge of making the Massena Operations very competitive on the world stage by remaining flexible to meet customer needs and hitting high quality on time delivery benchmarks," Jenne said.

"It was energizing to see the energy and enthusiasm from the plant manager and his team. The competitive spirit and strength Massena and the North Country have exemplified for generations is certainly alive and well at Arconic's Massena Operations," she pointed out.

"Every time I visit the Alcoa and Arconic plants in Massena I am amazed by the work the employees do on a daily basis," Jenne said.

"They take raw materials - what many of us would describe as dirt and rocks - shipped to Massena from around the world and turn it into shiny polished products that are transported out of Massena to support manufacturing around the country and world," she noted.

Jenne said the skill and dedication of the men and women doing the work is inspiring.

"I'm glad we at the state level have been able to work with Alcoa and Arconic to help keep their Massena Operations competitive. I'm also encouraged by the work Arconic is doing to grow its business in Massena," she said.