Alzheimer’s Association Walk to End Alzheimer’s raises over $34,000 in Canton 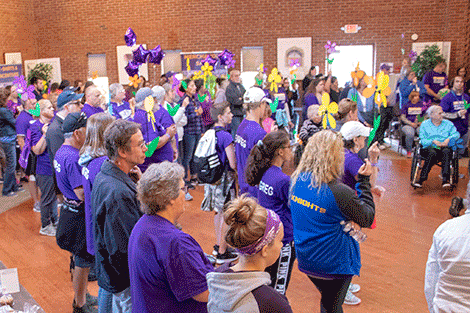 Participants take part in the opening ceremony of the Walk to End Alzheimer's in Canton.

CANTON -- Nearly 200 residents from across the North Country joined the Alzheimer’s Association Walk to End Alzheimer’s presented by Community Bank, N.A. in the fight to end Alzheimer’s disease on Sunday at St. Lawrence University. Participants raised over $34,375 to fund Alzheimer's care, support and research programs.

“The way this community bands together to fight Alzheimer’s disease each year is like no other,” said Catherine James, Chief Executive Officer for the Alzheimer’s Association, Central New York Chapter.

The top individual fundraisers at the Walk to End Alzheimer’s were Brenda Carbino of Ogdensburg, who raised $2,280 and Latoria Williams from 1FirstCashAdvance.Org, who raised $2,820. United Journey was the top fundraising team at this year’s Walk to End Alzheimer’s, raising more than $5,140. United Journey is comprised of staff, family and residents of United Helpers’ facilities throughout St. Lawrence County.

Participants enjoyed a three-mile walk through the historic St. Lawrence University campus, learned about Alzheimer’s Association programs and services, clinical trial and advocacy opportunities and engaged with corporate sponsors. They also took part in an opening ceremony where they renewed their commitment to the fight against Alzheimer’s disease and heard from guest speaker Greg Carbino, who talked his diagnosis of Alzheimer’s disease and how his life changed as a result. Carbino, a jeweler in his hometown of Ogdensburg, discussed how his family was his support system and reveal the promise he and his wife made to each other following his diagnosis.

“My wife and I promised to each other, the day of my diagnosis, that we are not going to let worrying about tomorrow ruin our today,” he said. “It is something that is not always easy to do, but it is something that must be done.”

A Facebook Live video of the opening ceremony, including Carbino’s remarks, is available online (https://www.facebook.com/alzcny).