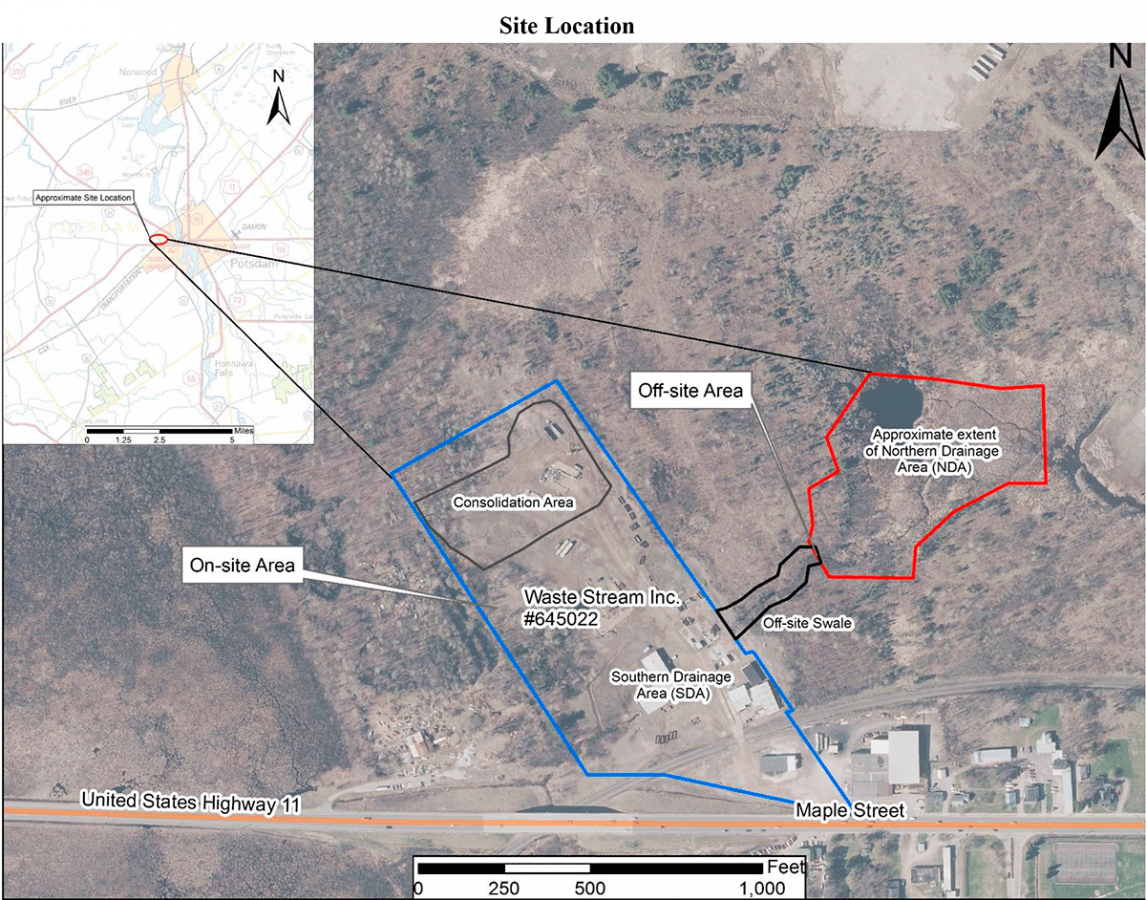 The state Department of Environmental Conservation has announced that the cleanup will be finished by next spring, but Skip Bisnett, general manager of Casella Resource Solutions operations in Potsdam, says the cleanup contractor has a goal of getting it done before then.

“The contractor has set a personal target date to be completed by the end of the year,” Bisnett said. “Obviously they have longer, but the contractor wants it done earlier.”

A DEC fact sheet says the Waste Stream Inc. Superfund site is designated as a Class 2 site, with a “significant threat to public health or the environment,” requiring action.

“PCBs (polychlorinated biphenyl) are the primary constituent of concern (COC) in surface and subsurface soil and sediment at the site,” the fact sheet says, and notes additional volatile compounds and metals in the soil.

The main source of the PCBs, Bisnett said, was transformers from Niagara Mohawk Power Corporation, the former electricity utility, which dropped off the transformers when they were done with them. They held PCBs in the oil used as an insulator. They were drained before they came to the yard, and the oil was taken to a tank farm in Brushton, but the transformer casings still had enough of the carcinogen to be of concern today.

Contaminants also arrived at the yard from the GM plant in Massena, which was disposing of manufacturing dies, and from the old Reynolds Metals plant there, now Alcoa East, Bisnett said.

All this was happening when many contaminants were first being identified as dangerous.

“Nobody did anything wrong. It was all acceptable at the time,” Bisnett said.

The cleanup activities are being conducted by the Waste Stream Group “remedial party,” with DEC oversight, the fact sheet says.

The estimated cost of the cleanup is $9.5 million.

The group of named as “potentially responsible parties” is National Grid as the successor to Niagara Mohawk, the current owners of the site Casella Waste, and Reynolds/Alcoa East. The GM plant was also named, but they made a one-time payment to the fund when bankruptcy was declared at the Massena site, Bisnett said.

“That whole group concerned is backing the cleanup.”

The 27-acre site is just west of the village. It had been used primarily for scrap metal recycling. The site is empty with no buildings standing.

“Historic operations led to contamination at the site and an off-site area consisting primarily of wetlands. The site is bounded by another scrap yard to the west, undeveloped land to the north, a wetland to the east and an industrial area and State Route 11 to the south,” the fact sheet says.

“We disclosed to DEC that there was activity there that might have an impact” as the concern over contaminants became known generally, Bisnett said.

The work will involve excavation of more than 30,000 cubic yards of material from specific spots at the site, the most dangerous of which will be taken to be “disposed of at an off-site, permitted hazardous waste facility,” according to the fact sheet. Some material will be “consolidated on site” and capped.

“The wetlands will be restored with appropriate fill, topsoil, wetland seed mixtures, shrubs, and trees to create a natural condition,” the fact sheet says.

Following that is a regime of management that will include monitoring and testing.

What Bisnett and Casella have left there is “a whole bunch of worthless property.” He suggested at a recent village board meeting was that it might be used as a solar array generation site. “That’s about it,” he said.

“That might be a way to repurpose it. The way it’s being remediated and capped it won’t really be useable for anything else” he could think of.

The company has asked for a lower assessment to decrease the property tax bill on the site.

“The tax is a lot more than we want it to be, so we filed for a reduction,” he said.

In spite of all that, Bisnett said he’s glad the work is going ahead.

“The whole cleanup is very encouraging,” he said.