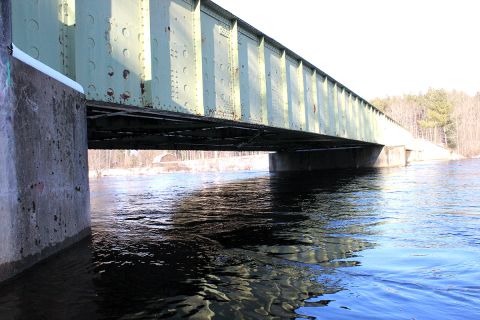 The Browns Bridge on Browns Bridge Road in Pierrepont near the northern Stone Valley Recreation Area trailhead is one of several bridges slated for rehab in 2019. Adam Atkinson

The St. Lawrence County Highway Department is hoping to complete $17.8 million in work on a dozen bridges beginning in 2019.

The county has secured $9.5 million in Bridge NY funding for work on Browns Bridge in Pierrepont, South Shore Road in Wanakena, and three bridges on Country Route 17 in Russell and DeKalb.

The county also received $7.1 million preservation funding for work on bridges on County Route 46 in Massena, County Route 17 in DeKalb, and County Routes 3 and 8 in Rossie.

The county also hopes to fund bridge replacements on Country Route 35 in Canton, Brouse Bridge in Norfolk and Sullivan Street Bridge in Stockholm at an estimated cost of $1.2 million.

St. Lawrence County Highway Superintendent Donald Chambers said his crews will be busy in coming years but is grateful to have the funding for the much-needed projects.

“I am very pleased with the outcome of the Bridge NY and NYSDOT programs and for all the hard work by the County team on the submissions. The St Lawrence County Department of Highways looks forward to the completion of these much needed projects for the citizens of the County,” he said.

“Don Chambers, our Highway Superintendent, has done an exceptional job accessing these limited transportation infrastructure funds on behalf of the county. This $16 million in funding will go a long ways in repairing our bridges that need the most immediate remediation. To produce this money from the county taxpayers, would have required a tax increase of over 40 percent. We are extremely grateful for Don Chambers efforts in attaining these much needed funds for our citizen.”

The funding comes as a major win for the county, which is struggling to maintain a massive number of dilapidated bridges.

A report referenced by Chambers in May says 35 percent of bridges are deficient.

The county estimated it would cost $18.4 million per year for the next decade to correct and maintain the deficiencies, which is more than the county has invested.

The report says 35 percent or 70 of the county’s 194 bridges are in a deficient state and should be replaced within 10 years. Nine bridges have been closed.

Chambers said he hopes to begin work on many of the projects in 2019 with completion in 2020.

He said consultants and contractors will need to be brought in to assist with the work as the projects will demand more workers than the highway department employs.

Chambers said the work will not all be performed simultaneously and he is still working on scheduling the projects, which will then need approval from the St. Lawrence County Board of Legislators.