Paquette, of Hammond, has been a United Helpers employee caring for residents at the company’s facilities in Ogdensburg for more than 30 years.

She was nominated for the honor by United Helpers Rehabilitation and Senior Care Vice President of Operations Timothy Parsons.

“She has stood out to me since working with her as a physical therapist at Cedars Nursing Home, where we both began our careers with United Helpers,” Parsons wrote in his nomination.

“As a therapist, I would always try to seek out staff I could trust for their opinion and feedback regarding our residents. Helen was one of those aides. She knows her residents better than anyone," he added.

More recently, during the COVID-19 pandemic, Paquette has really shined, he said.

“When we know a resident is in need of something, Helen is who we often ask, and usually she has already taken care of it, many times using her own resources,” he said. “She is the one we ask when some “pampering” is needed, and when our salon had to shut down, she began cutting hair in addition to her other duties. She is the type of employee I cherish and I believe she is deserving of this honor.”

The Fannie Frank Award, which is a $1,000 cash bonus, is awarded based on the following criteria: A remarkably caring demeanor, remarkably competent care, continuous employment with UH for five or more years, nomination by the vice president of operations at her respective facility.

According to Dr. Gordon, Frank was a Polish immigrant who moved to the U.S. prior to World War I with her parents and six of her nine siblings. Three of her older siblings were already married and stayed behind, he said. They perished in World War II.

Dr. Gordon grew up in New York City in close proximity to his grandmother and credits her with instilling in him a love of animals that would eventually lead to his career as a veterinarian, noting that he and his grandmother were the only “animal lovers” in his family.

In addition to paying tribute to his grandmother, Dr. Gordon said the award will serve as a way to honor his family’s legacy.

“Now, her name will live on forever,” he said.

Below are from left, Mrs. Gordon, Mrs. Paquette, and Dr. Gordon. The Gordons created an endowment in memory of Dr. Gordon’s grandmother to fund this award, which will recognize a CNA from the United Helpers organization each year. 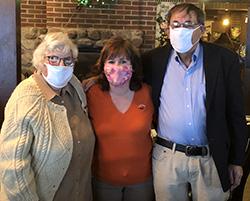