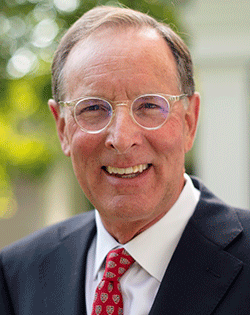 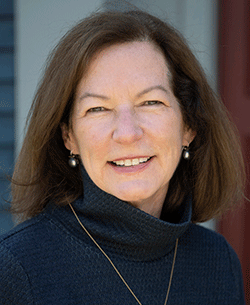 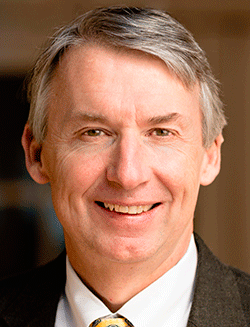 To be considered for a St. Lawrence University doctorate of humane letters, nominees must have achievement in scholarship, the arts, business, or professional life; distinguished humanitarian, altruistic, or philanthropic service; or distinctive contributions to a regional, national, or global community; and an abiding interest in a relationship with St. Lawrence University that furthers the goals and mission of the University.

Known for his forward-thinking approach to ensuring St. Lawrence provides a liberal arts education that opens doors and possibilities, President William L. Fox put current and future St. Lawrence community members at the center of his work to ensure programs, buildings and spaces would exceed their needs. Under his leadership, President Fox implemented a distinctive new curriculum and launched the Innovation Grants program, prioritized creating a more inclusive campus, created new buildings and renovated historical spaces, and guided the University to record fundraising results during The Campaign for Every Laurentian.

Fox became the 18th president of St. Lawrence University and senior lecturer in history on July 1, 2009, and served until July 2021 when he was named president emeritus. Previously, he served as president and senior lecturer in philosophy, religion, and history at Culver-Stockton College in Missouri from 2003 to 2009. He received a Master of Divinity degree from Harvard University in 1978 and a Ph.D. in American religious history from George Washington University in 1989.

As a scholar, President Fox has published four books: a study of Harvard theologian Willard L. Sperry (1991), the award-winning Valley of the Craftsmen (2001) and Lodge of the Double-Headed Eagle: Two Centuries of Scottish Rite Freemasonry (1999). Most recently, a selection of his essays written over the years at St. Lawrence was assembled as Laurentian Seasons (2019). In 2014, he contributed a section to the 3-volume study, Divinings: Religion at Harvard, 1636-1992 by his former professor, the late George H. Williams (St. Lawrence '36). He was also editor of a 10-volume book series in church history and a former faculty member at Claremont Theological School, Montgomery College, Howard University, and Goucher College.

For many years he served on the boards of various community organizations in Washington, D.C., and Pomona, California. While at St. Lawrence, President Fox served in various leadership positions in the New York Six consortium and was on the board of the New York Council of Independent Colleges and Universities. He was active in several national higher education associations based in Washington, D.C., particularly the Council of Independent Colleges.

Her professional career included 25 years with the Board of Governors of the Federal Reserve System. She worked in congressional and public affairs and internal communications, including serving as deputy congressional liaison, assistant secretary of the Federal Open Market Committee, and director of the Office of Board Members. Lynn retired in 2012 as a senior adviser, having telecommuted from Canton, spending a week per month in Washington.

A native of Spartanburg, South Carolina, Lynn graduated from Smith College and earned an MBA from George Washington University. Active on non-profit boards, Lynn has served as a trustee at Smith, a member of the board of the Frederic Remington Art Museum, and at The Wild Center, where she is currently vice-chair.

Immersed in all aspects of the Laurentian community, Lynn co-taught courses at St. Lawrence on the Federal Reserve and on non-profit management. As presidential spouse, she had a particular interest in programs for women, both students and alumnae, and career exploration, including through the Sophomore Journey and SLU Connect initiatives.

On July 1, 2015, Grant H. Cornwell Jr. was named the 15th president of Rollins College, in Winter Park, Florida, after eight years as president of the College of Wooster, in Wooster, Ohio. He has long championed initiatives in diversity and global engagement, collaborative research, and experiential learning.

Prior to his Wooster presidency, Cornwell served as vice president of the University and dean of Academic Affairs at St. Lawrence University for five years. For the previous 16 years, he was a member and chair of the St. Lawrence Philosophy Department and dean of the University's hallmark First-Year Program. The curiosity and exploration at the core of liberal learning remain driving forces in his approach to higher education.