BRASHER FALLS -- Matthew Svarczkopf of Brasher Falls has been awarded the Edward J. Kiernan Scholarship by the International Union of Police Associations. 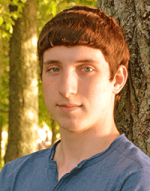 Matthew is the son of Todd Svarczkopf, a member of the New York State Police Investigators Association, an affiliate of the International Union of Police Associations. He will attend SUNY Canton to study homeland security and accounting.

The scholarship was established in 1999 by I.U.P.A.’s International President Sam A. Cabral to honor New York City Police Officer and former I.U.P.A. President Edward J. Kiernan, in recognition of his long commitment to the improvement of law enforcement officers’ and their families’ lives.

I.U.P.A. Region 11 Board Member and President of New York State Police Investigators Association, Chris Quick, in a prepared statement said “New York State Police Investigators Association is proud of Mr. Svarczkopf for being selected as a recipient of the Edward J. Kiernan Scholarship for 2018 as well as for his choice of a career in public service.”

In order to qualify for a Kiernan scholarship, an applicant’s parent or guardian must be a member of an affiliate of the I.U.P.A. The applicant must also be accepted at an accredited university or college in a course of study in law enforcement, labor relations, or a related field.