POTSDAM – A former Potsdam resident Crescent Islam has been awarded a Promising Professional Award from for his work at shipbuilder Huntington Ingalls Industries (HII). 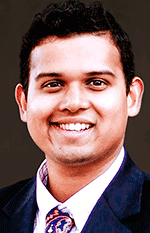 The award recognizes early career professionals who demonstrate tremendous potential for future contributions to the fields of science and engineering.

Islam was born and raised in Potsdam graduating high school in 2010 through dual enrollment at PCS and the Clarkson School, and with a Clarkson University bachelor’s degree in 2013.

SASE was founded in 2007 to help Asian heritage scientific and engineering professionals achieve their potential. The society’s achievement awards recognize Asian and Pacific Islander American students and professionals for work they are doing in their respective fields.

HII is America’s largest military shipbuilding company and a provider of professional services to partners in government and industry and employs more than 41,000 people in the U.S. and abroad.