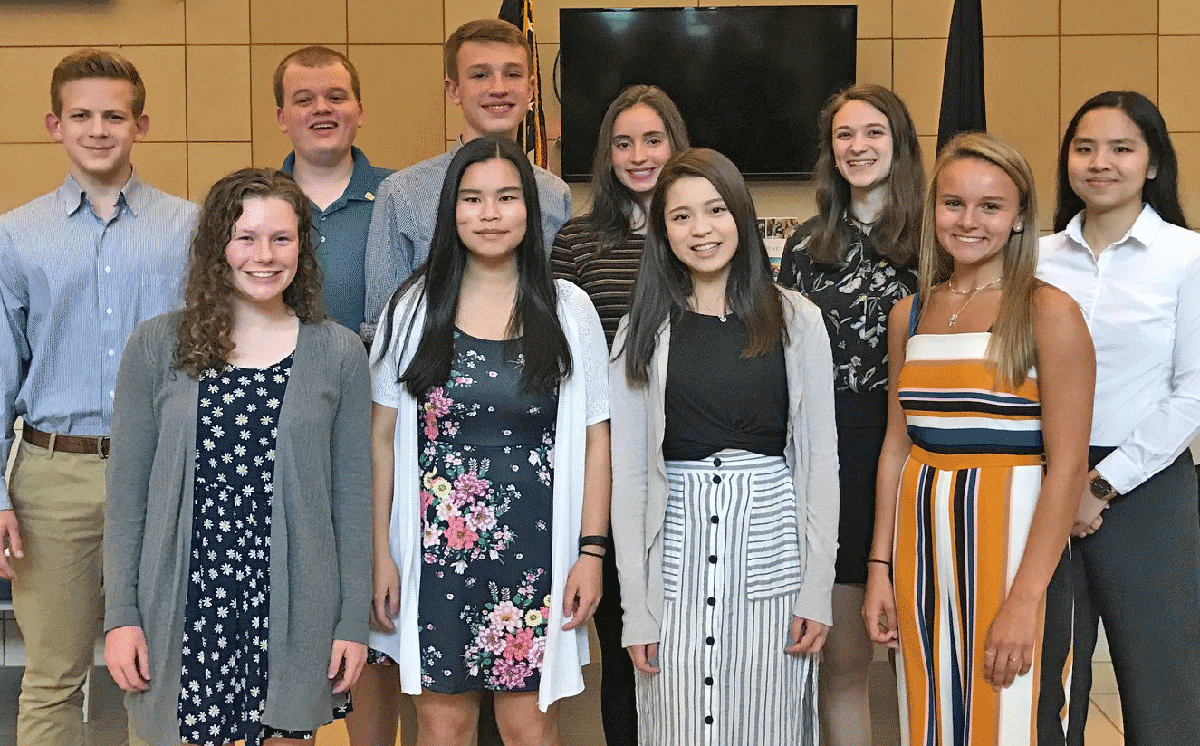 POTSDAM – The Potsdam High School class of 2019 valedictorian, salutatorian and academic top 10 have been announced.

• Jennifer Zhang is the valedictorian of the Class of 2019. She is highly personally motivated and believes in learning as much as possible outside the classroom. “I discovered my passions and the value of learning through my extracurriculars, which have consistently been the best part of my experience at PCS. I am very thankful for all the opportunities I had.”

Jenn won the Top Delegate Award at the 2018 Model G20 Summit held in Boston. Since then, she has returned to Model G20 summits and task forces around the world as a lead ambassador. In August 2018, she traveled to Argentina to co-author a position paper written on behalf of the world’s teenagers, which was submitted to all the G20 country representatives. In February 2019, she traveled to the Beijing Model G20 Summit to lead workshops and deliver the conference’s closing speech. For three years, she was a lead attorney on the Mock Trial team and competed at New York State Finals her sophomore year, placing in the top 6 of more than 350 teams.

She has served as Class President for four years and on Student Council for three years and on multiple district leadership committees as a student representative. She is President of Model United Nations, Chief Editor of the Sandstoner Yearbook, and a former competitor in Speech & Debate. She is a member of National Honor Society, French National Honor Society, and is a National Merit Finalist. She has interned with the Canton Town Court and volunteered on several political campaigns.

Jenn has taken honors and Advanced Placement courses throughout all of high school. This year, she also took Microeconomics and Politics in the Americas at Clarkson University. She plans to major in political science in college. She is interested in working in the fields of international relations, law, and public policy to help create positive change in people’s lives.

• Caroline Bergan is the salutatorian of the Class of 2019. She is an extremely talented and hard working individual who is highly accomplished in academics, athletics, and musical theater. She has spread herself successfully between demanding classes, sports practices, and drama club rehearsals throughout high school. “Hard work, attitude, and dedication are much more important than brains. Fake it ‘till you make it.”

Caroline is Vice President of the Class of 2019 and has served as a class officer since sophomore year. She is a member of National Honor Society, French National Honor Society, and Model United Nations. This year, she took Microeconomics at Clarkson University and multiple Advanced Placement courses, traveling to France through the AP French student exchange program. Caroline has played varsity soccer and lacrosse throughout high school and captains both teams as a senior. For all three years that she was a member, the varsity soccer team won the Section X Championship. Caroline is also an officer of Varsity Club.

Caroline starred as Wednesday in The Addams Family this year and as Ariel in Footloose during her junior year, both lead roles in musical productions. She plays the piano in Concert Band and is part of Canta Sera, Treble Choir, Concert Choir, and Area All-State Choir. She remarks, “Extracurriculars are everything to me, they’ve brought me so many wonderful friends and experiences that I’ll never forget.” Caroline will attend Syracuse University in the fall, majoring in music, specifically vocal jazz and business. She plans to go into the music industry and is interested in management. “I strive to impact as many lives as I can, even if it simply means putting a smile on someone’s face and brightening their day.”

• Lauren Shipp is in the top ten of the Potsdam High School Class of 2019. Her parents are Devon and Debbie Shipp.

She was on the swimming and lacrosse teams throughout her high school career and a captain for both teams during her senior year. She has also been been in the Drama Club each year, and this year was the stage manager for the musical The Addams Family and Vice President of Drama Club. She has regularly participated in band and chorus, as well as being a NYSSMA soloist for flute and voice, and Area-All State qualifier for the latter. She has been part of Model UN, Science Olympiad, Canta Sera, National Honors Society and National French Honors Society. She will attend the University of Delaware to study Biomedical Engineering.

“To the students graduating in the next few years: your best is all anyone can ask of you. Don’t stress over things you can’t change. Make sure to enjoy your time in high school because it will be over before you know it.”

• Annie Yang is within the Academic Top 10 of Potsdam High school. Her parents are Yan Qing Liu and De Dong Yang.

Annie plans on attending the Rochester Institute of Technology, majoring in Graphic Design. While Annie strongly believes in hard work and meeting deadlines, she also emphasizes that having a well-rounded high school experience is incredibly important. Annie encourages everyone to make memories that they can look back on fondly.

• Ruth Stevenson is in the academic top 10 of the class of 2019. Her mother is Emmy Stevenson.

Ruth will be attending the University of New Haven majoring in Criminal Justice - Investigative Services at the Henry C. Lee College of Criminal Justice and Forensic Sciences. She will also be minoring in Forensic Psychology and Russian.

She is a member of National Honor Society, National Art Honor Society, and National French Honor Society. She is also involved in Science Olympiad, Artistic Congress, and Sandstoner Yearbook. In addition, she sings in Concert Choir, Treble Choir, and Canta Sera, and is an Area-All State NYSSMA solo finalist. In drama club, she has worked on stage crew for the musical and performed in the 2019 Broadway Revue. Ruth has worked with troopers in the State Police and investigators in The Bureau of Criminal Investigation Forensic Identification Unit and has a great interest and appreciation for the work they do.

She strives for the knowledge and experience that will help her be successful in her area of study and trusts this career will be how she can make the world a better and safer place.

• Jacob Francom, 16 years old, is graduating a year early with the Class of 2019 to get a head start on college and his goals in medical science.

Having been raised by two music teachers, Dr. Jeff Francom and Kelly Francom, Jacob has achieved many musical accomplishments. He has been active in music through band and lessons outside school for both piano and the French horn, along with music camps at both the Crane School of Music and Brigham Young University, Utah. These activities have helped Jacob play in many different bands and orchestras.

Along with musical achievements, he had the opportunity to compete at states for swimming in Nassau, Long Island. He swam the butterfly in the Canton-Lisbon-Potsdam medley relay team.

Jacob has many other accomplishments, and thanks his family for them. Since a young age, he has been taught to work hard first and have fun later. He plans to use these lessons when he attends Brigham Young University in the fall.

• Marissa Carl is the daughter of Karen and Brian Carl. Throughout her high school career she has participated in a variety of extracurricular activities. Marissa enjoys music and dancing and has been in two musicals, as well as being on a dance team and playing flute in concert band. She also acted in the play Almost, Maine at PCS her sophomore year.

During her senior year, she joined Model United Nations and was Secretary in National Honor Society. Marissa also job shadowed with the Senior Editor of St. Lawrence University Magazine and has a love for writing and editing. Overall, Marissa has a passion for social studies and language and hopes to pursue anthropology at Mount Holyoke College in the fall.

Marissa believes that your motivations for success should be your own. “Do everything to the best of your ability. That’s all that matters. Put in 100% effort at all times and you’ll be proud of what you have achieved.”

• Dylan Thomas Bradley is 8th in the Class of 2019. His parents are Brooke and Dennis Rutkauskas.

Dylan He is very task-oriented, and loves to help people. He has been inducted into both the National Honor Society, as well as the National Technical Honor Society. Dylan frequently helps around the school not only as a Library Aide, but as a Tech Aide and one of the few members of Potsdam’s Student IT Help Desk. He won The Potsdam Notary Student of the Year award for 2019, as well as the Potsdam Notary Student of the Month in March.

He plans on attending SUNY Canton this fall for Information Technology, which he says “is a way that I can do my two favorite things: help people, and work with technology”. He intends to go into a helpdesk position after his graduation, and allow this position to shape his future career. He has been motivated not only by the staff of PCS and his family, but his intense passion to expand his knowledge and exceed expectations. He advises students that opportunity always presents itself as hard work, and you just have to take it on and make the best of it.

• Dustin Grant is the son of Fay and Danielle Grant. He believes that his willingness to learn has enabled him to succeed in school.

During his four years at Potsdam High School Dustin has participated in several sports and clubs including soccer, hockey, lacrosse, National Honor Society, French Honor Society and mock trial. Outside of school, he also is a competitive figure skater as well as a ice dance coach.

Dustin will be attending Rochester Institute of Technology where he will study Electrical Engineering with a focus in robotics.

• Ana Jukic is the daughter of Kim and Boris Jukic. She has been an active member of student council for three years and serves as the co-president this year.

Ana is a three-year member of the French Honor Society and National Honor Society, for which she serves as president. She has been active in Model UN all four years and has participated in Drama Club, Speech and Debate, Environmental Club and Key Club. Ana has played trombone in Concert Band for four years and enjoys playing piano as well. Since she was young, Ana has been passionate about videography and filmmaking.

Ana has been accepted to Emerson College where she will major in Media Arts Production. This summer she will serve as an intern for filmmaking at the School of Creative and Performing Arts Camp in Burlington, Vermont. After college, Ana hopes to pursue a career in filmmaking or media arts.