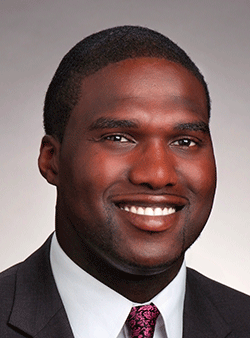 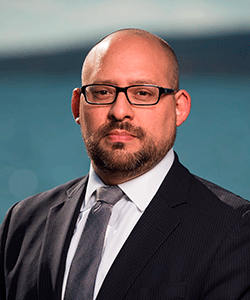 Aaron SandersPOTSDAM -- The Potsdam College Foundation Board of Trustees named two accomplished and dedicated SUNY Potsdam alumni as new trustees at the board's fall meeting. Trustees welcomed Eldon Harris '05 and Aaron Sanders '02 as their newest colleagues, as they work collectively to foster giving in support of their alma mater.

Harris '05 earned his bachelor's degree in business economics from SUNY Potsdam, where he competed on the Potsdam Bears Men's Basketball Team, ultimately being named to the All-East Region second team by D3Hoops. He is an associate vice president, branch manager and financial advisor at Morgan Stanley, based in Albany, N.Y. Prior to joining Morgan Stanley, he worked for Merrill Lynch. Harris has earned the Certified Private Wealth Advisor designation, awarded by the Investments and Wealth Institute, which affords him the opportunity to serve high-net-worth individuals who seek the latest, most advanced knowledge and techniques, and addresses the sophisticated needs of clients that focus on investing and wealth management. Harris has also earned the Chartered Retirement Planning Counselor (CRPC) designation from the College for Financial Planning and assists clients with pre- and post-retirement needs, as well as issues related to equity compensation asset management and estate planning services. In support of the next generation of students at his alma mater, Harris has given generously to the Pay It Forward Scholarship Program. He and his family reside in Albany, where he serves as a trustee for the Albany Leadership Charter High School for Girls and for the Metropolitan Baptist Church of Albany. In his spare time, he enjoys spending time with his family, playing basketball and traveling.

Sanders '02 obtained his bachelor's degree in political science from SUNY Potsdam in 2002, and graduated from Hofstra University School of Law in 2006. While at Potsdam, he competed on the SUNY Potsdam Men's Soccer Team. Now an attorney and partner at Zea Proukou PLLC, Sanders has spent his entire career practicing New York State Workers' Compensation Law and has handled thousands of hearings in front of the Workers' Compensation Board. His practice is dedicated entirely to representing injured workers, and he combines his extensive knowledge of the law with his litigation experience to make sure his clients receive the benefits and payments to which they are entitled. Sanders has presented at multiple Continuing Legal Education programs, instructing other attorneys on various aspects of the Workers' Compensation Law. His lectures have focused on a variety of topics, including ways to avoid common delays in the process that prevent injured workers from receiving their payments and medical care in a timely manner. Sanders is the president of the Injured Workers' Bar Association in New York State. He also serves on the board of directors for the Workers' Compensation Alliance and is a member of the New York State Bar Association, the Monroe County Bar Association, the Ontario County Bar Association, the Greater Rochester Association for Women Attorneys and the Workers' Injury Law and Advocacy Group. He has remained active with his alma mater, serving on the SUNY Potsdam Business Alumni Advisory Council and the Men's Soccer Alumni Board. In his free time, Sanders enjoys spending time with his wife and two children, going to concerts, playing soccer, and supporting his favorite sports teams.